Though an amusement park Michigan's Adventure isn't really a theme park. It's had just the one area with a discernable theme, the generic Old West thing that parks settled on because I guess it's cheap? And that's not a strong theme either, just the kind of fencing around Wolverine Wildcat and Shivering Timbers, plus there being an Old Time Photos booth (closed, last Monday) and a leather-goods shop (also closed) and pan-for-gold activity (again, closed) all close together. And the Wagon Wheel Pizza stand (closed) and Wildcat grill (open). But that's sort of changed. In late 2019 they tore out the Be-Bop Boulevard car-ride path, the last thing that the park installed when it was an independent park. This to put in a bunch of new rides, and to move one roller coaster, to make the new Camp Snoopy kiddieland area. This was our first time seeing it.

Camp Snoopy's a kiddieland theme common to Cedar Fair parks; we've been to its sisters at Cedar Point and at Kings Island. It's a couple of kids rides like Balloon Races or a Crazy Bus ride, except that a Peanuts character is on it. Many of these don't make a lot of sense because while the Peanuts cast got sent to camp often it's not like you ever saw them do much besides, like, swim, or go to the mess hall. (But then the only amusement park ride ever in the comic strip was a partial view of a Tilt-A-Whirl.) I guess Snoopy was in a tiny hot air balloon once, so that's something. The least contorted theme-fit was Pig Pen's Mud Buggies, cars on a thematically muddy 'track'.

It all looks handsome enough and there's, like, walls with pictures of Peanuts characters or individual strips set up. There's a Snoopy statue with some Woodstock statues around, good for photograph-taking. And there's some pictures of Peanuts characters wearing ``achievement'' shirts, like the declaration that Linus was a Junior Counselor, or that Marcie had a badge in Cartography. Hey, you remember all those strips where Marcie could not shut up about mapmaking.

Camp Snoopy has what certainly looks to us like the former Big Dipper roller coaster, relocated and re-themed. The Roller Coaster Database lists Big Dipper as defunct but also as moved within the park and renamed, changes that I don't think rate calling Big Dipper ``defunct''. But questions of identity are always hard and roller coasters offer a surprisingly fruitful set of examples to challenge your idea of what it means to still be a thing. This bothers me because I think Michigan's Adventure might hold the title for oldest amusement park not to have removed a roller coaster and I don't want to have my claim challenged by arguments about whether Big Dipper is defunct.

The location looks great as you'd expect for something so new. We observed that when they took out Be-Bop Boulevard it seemed the park was trying not to tear down every tree, and they seem to have built around as many of the trees as practical. Likely this helps support the Summer Camp theme of the area.

The area also lets us get closer to the turnaround section of Zach's Zoomer than we ever could before. Well, closer enough to take pictures; the car ride would let us see it, but with the ride in motion we weren't taking photos. Zach's Zoomer's exit (and entrance) are close to one of Camp Snoopy's entrances, but not right into it, and I wonder about the choice there.

Also adjacent to a Camp Snoopy entrance, but not fed into or from it, is the Carousel. This is your standard late-80s Chance fiberglass carousel, with replicas of Golden-Age-of-Carousel rides. It has twins at Waldameer, Dorney Park, used to have one at Funtown Pier in Seaside Boro, and on and on. The ride operator told us that they had started naming the mounts. The horse

bunny_hugger was on they called Apple, presumably for the apple painted on the side. Mine he said was named Jewel and yeah, there's costume jewelry along the horse's tackle, although it's not unique (or outstanding) in that.

At one point, during a bathroom break, the park public address system started playing The Who's ``Pinball Wizard''. I told

bunny_hugger I didn't even know the women's restroom had a jukebox. That's an okay quip, better when it's fresh-made on the spot.

We'd wanted a snack, but the vegetarian food options at Michigan's Adventure aren't great. Kettle Corn would have been the best but that stand was closed. We got a bag of (factory-made) caramel corn and this had a weird bit. The nutrition facts claimed four one-ounce servings per bag, and that each serving was 132.24 calories. That's got to be the Grand Rapids company that made this being funny. The calorie measure isn't even one-quarter of a number that makes sense. They're taking advantage of the rule that you can round your calorie estimate to within five calories of the measured amount, and for what? To get me to take a photo of the daft nutrition label? Fine, that worked, but are you proud of yourselves?

We accepted, not liking, that there was no riding Mad Mouse. And Thunderhawk's line was too long for us, and we didn't see Zach's Zoomer up again. We did get a second ride on Corkscrew. We'd hoped to finish the day by getting on a last ride on Shivering Timbers, only to find the queue roped off and a security guard in front of it. The same at Wolverine Wildcat, our second choice. This caught us by surprise and if we'd known we'd have got in line sooner. For a last ride, then, I suggested we go the Dodgems, a ride we pretty much never think about.

We were almost the last people in line. The ride operator did pop over to ask someone behind us to turn way anyone who tried to join. The ride operator also thanked a kid who pointed out that there were two more cars that people could go in, and explained that those cars weren't operating which is why they were off in the corner unused. The kid explained he thought maybe the ride operator hadn't noticed them. I felt empathy and sympathetic embarrassment for the kid. I could totally have done the same thing at that age.

Michigan's Adventure replaced the cars a couple years ago; I don't know where the cars inherited from Cedar Point went. The replacements have two themes, Cop Cars and Taxi Cars. They all have numbers and plates labelling major cities (Montreal, Sepang) or German cities (Spa, Hockenheim). My taxi? Austin, of course.

And so that was our Michigan's Adventure trip. We were glad to go, glad to spend the day doing that. But it wasn't fully satisfying either. Maybe no trip could be as good as we needed, after such a long wait and so much grinding stress since we'd seen it last. I hope we're able to get another trip in before the park closes for the year. 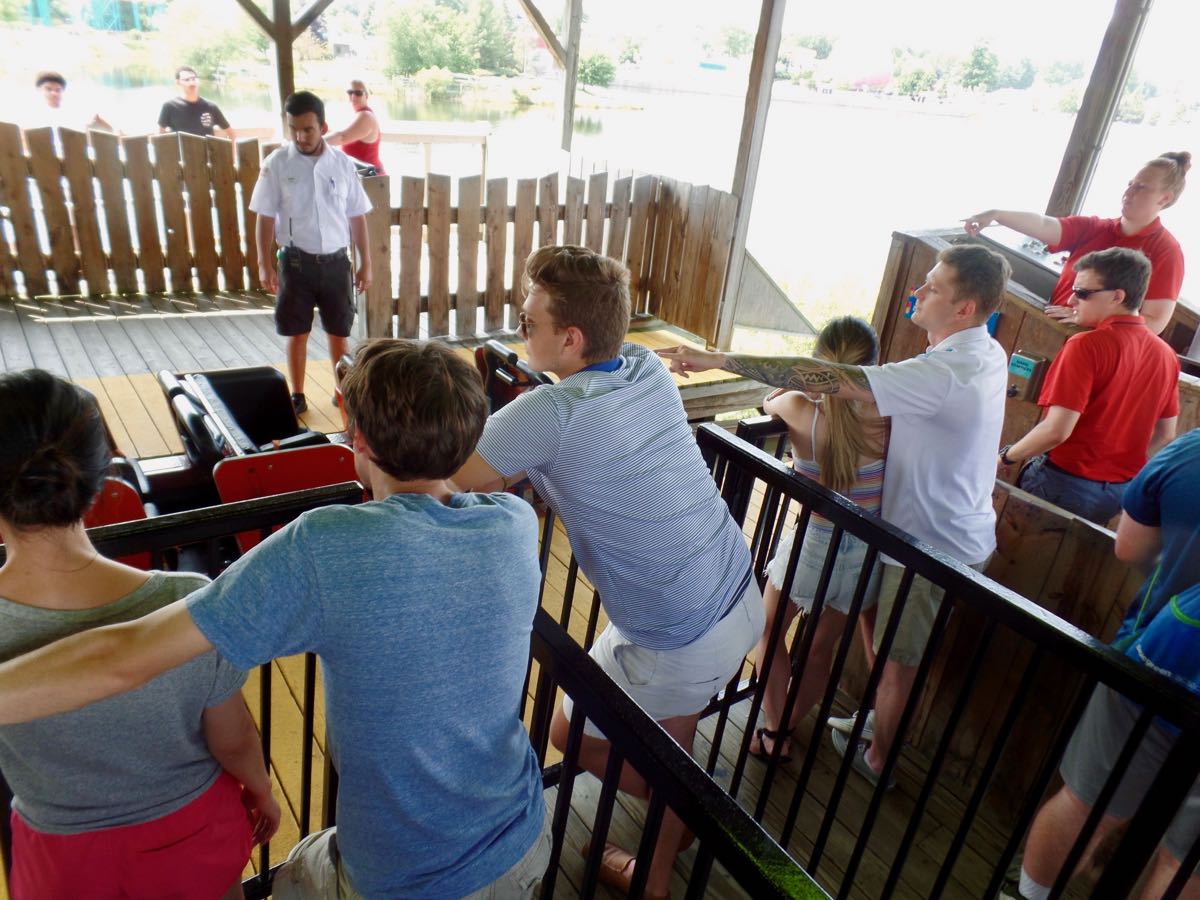 The first security person, come at last to confirm that there's an issue with the restraints. Note how many people are pointing him to the troublesome restraint. 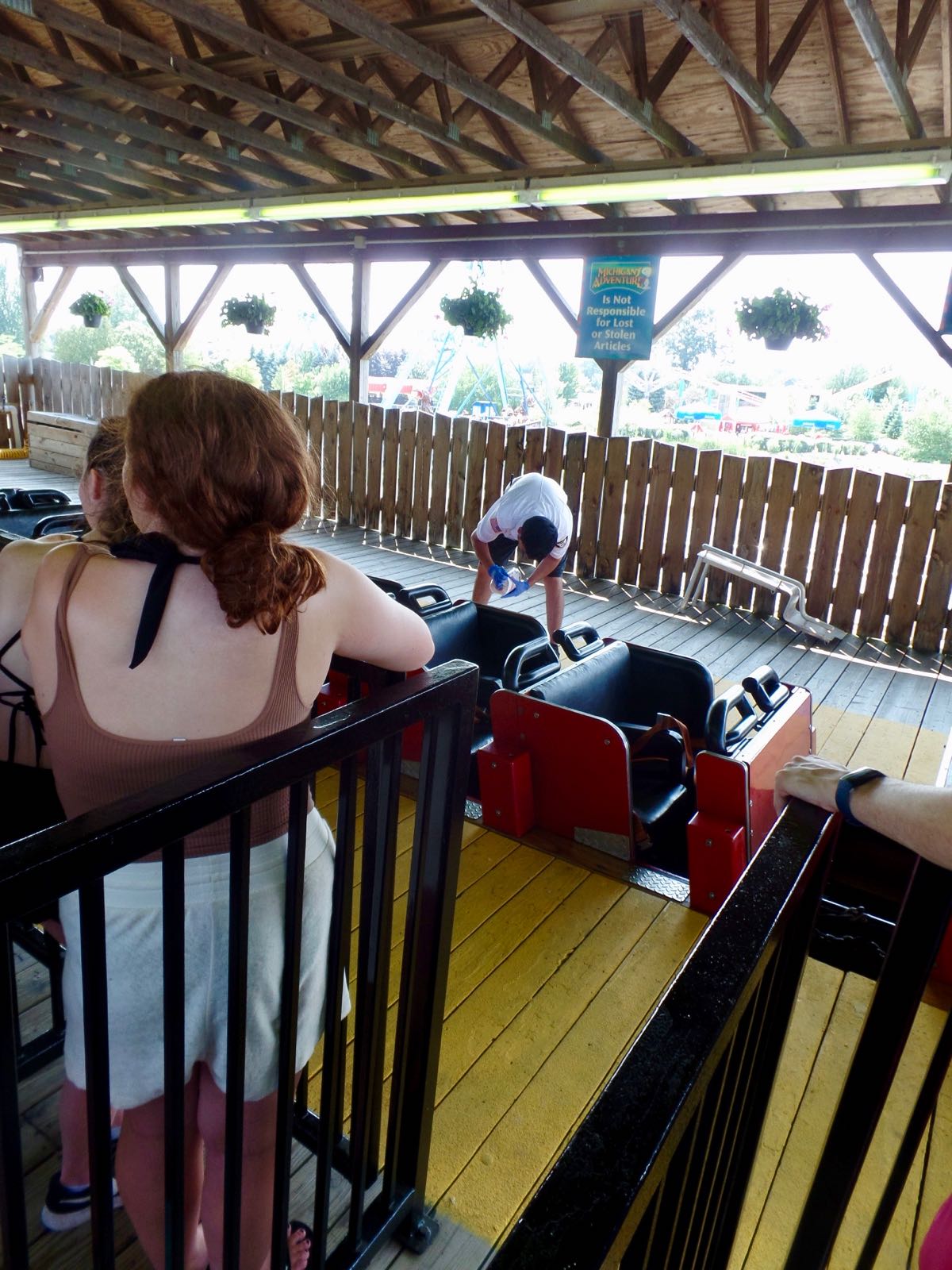 And here's the second security person, come to clean up this ride. 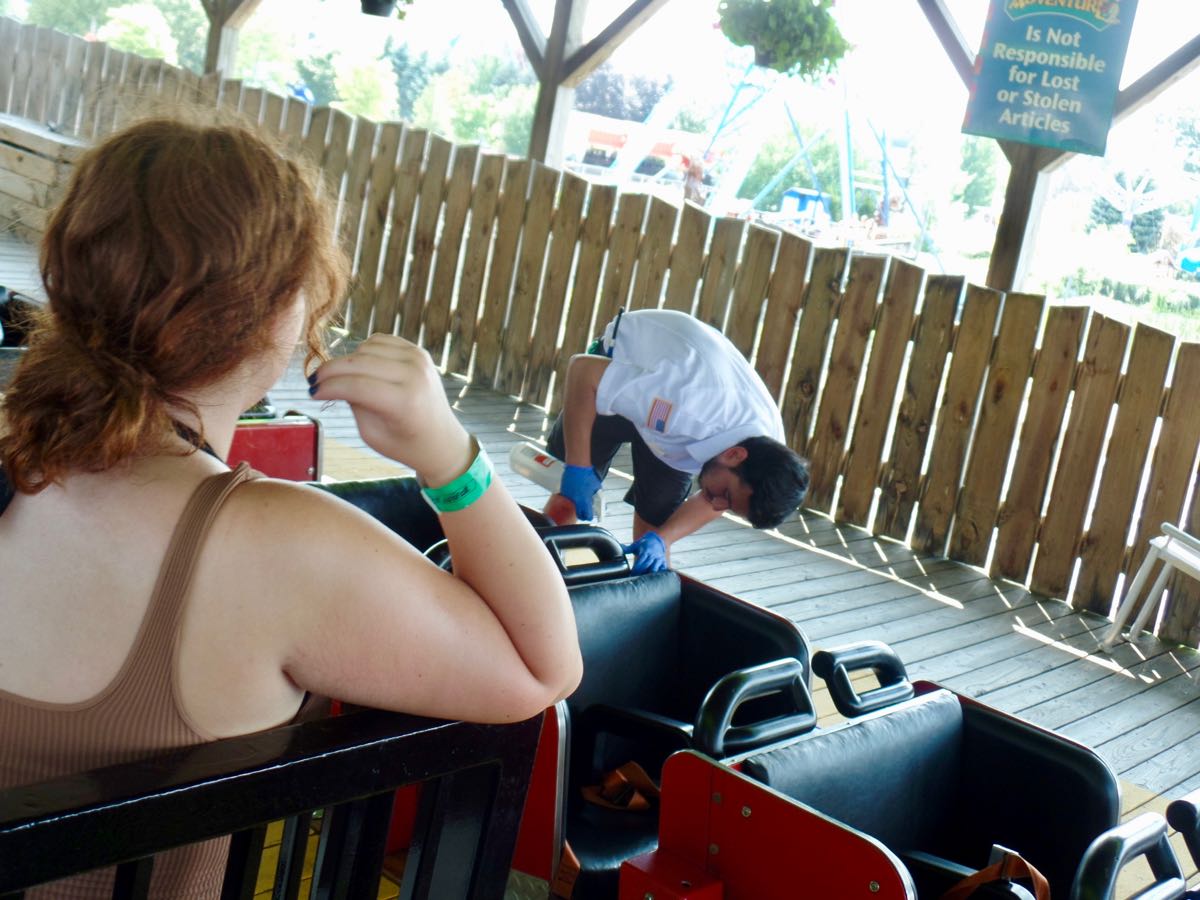 If I'd known this was all it took I'd have brought some wet wipes myself. I don't know.

Currently Reading: The Amazing Transformations of Jimmy Olsen, Editor Bob Joy (collection), Mort Boltinoff, Mort Weisinger, original comics. The latter stories in this get weirdly self-referential, like they were so delighted by Jimmy Olsen as a giant turtle man that they invented excuses to talk about it and have him turn back into one regardless of whether that makes a lick of sense even by the standards of 1960s nonsense. It's ... kind of fun, but it also feels like that stage where you make a ``love letter to the fans'' that's gibberish to everybody not already in on the gag.