So I've had to take a couple of Zoom meetings for work recently. The (new, although someone I always got on with who's returned to the company) local boss is more enthusiastic about live interactions instead of e-mail for coordinating things than I am. Still, I grant, there's some things that a live chat does better, such as demonstrating the project I'd been working on. That was Thursday's call. And that went quite well, with both him and two ... people from the Group that owns the company now ... mighty impressed.

Also asking for a couple features that I never thought of. But that are extremely sensible, and easy enough to add. I had the basic idea how to do it before the call was done, and had a prototype for it by the end of the day Friday. I need to re-think it so it's done well, but still, that's a gratifying experience.

Monday's phone call was also a pre-lunch call, not my favorite. But it was me, local-boss, and the SQL server guy. This is always treacherous because you don't really talk with the SQL server guy. You just toss out a topic and let him go until he runs out of words, which he never does, and hope that something of what he said has to do with what you wanted to know. The thing that directly involved me, he seems to have agreed, was easy to do and didn't require me to do anything different. (I had said this in an e-mail but it's nice to have reassurance.) SQL server guy also wanted to go in detail about an issue where this property we had all assumed was unique turns out not to be so. I understand he's upset as this messes up his database design. But (I'd said in e-mail) it turns out there's enough cases of this not being unique that I think we have to accept that's the way it is, regardless of how it offends our sense of reasonable data. And I got the go-ahead for a project I've been telling everybody we ought to be doing, rewriting my stuff to change database engines. I realize this is boring but when I take my job seriously I realize this is a much-needed change. Also I've written a demonstration project that covers about 70% of the whole project.

The remarkable thing, though: local boss brought up how he was aware that neither of us had raises in a long time. (Neither of us ever have, if I didn't mis-hear SQL guy.) He said the company had lost a lot of talent in the takeover (!!) and that they were putting together something to make it all worthwhile ``in the end''. This is a promise vague to the point of meaninglessness ... except that it was completely unsolicited. There was nothing any of us had said that got anywhere near the topic; we were all talking about servers and file transfers and stuff like that. So that's an interesting interruption to have. I hope that it's more than a way to put off our discontent a while.

I don't know how long I should let myself be locally content by this, but I like the talk.

Now back to Michigan's Adventure for more pictures. 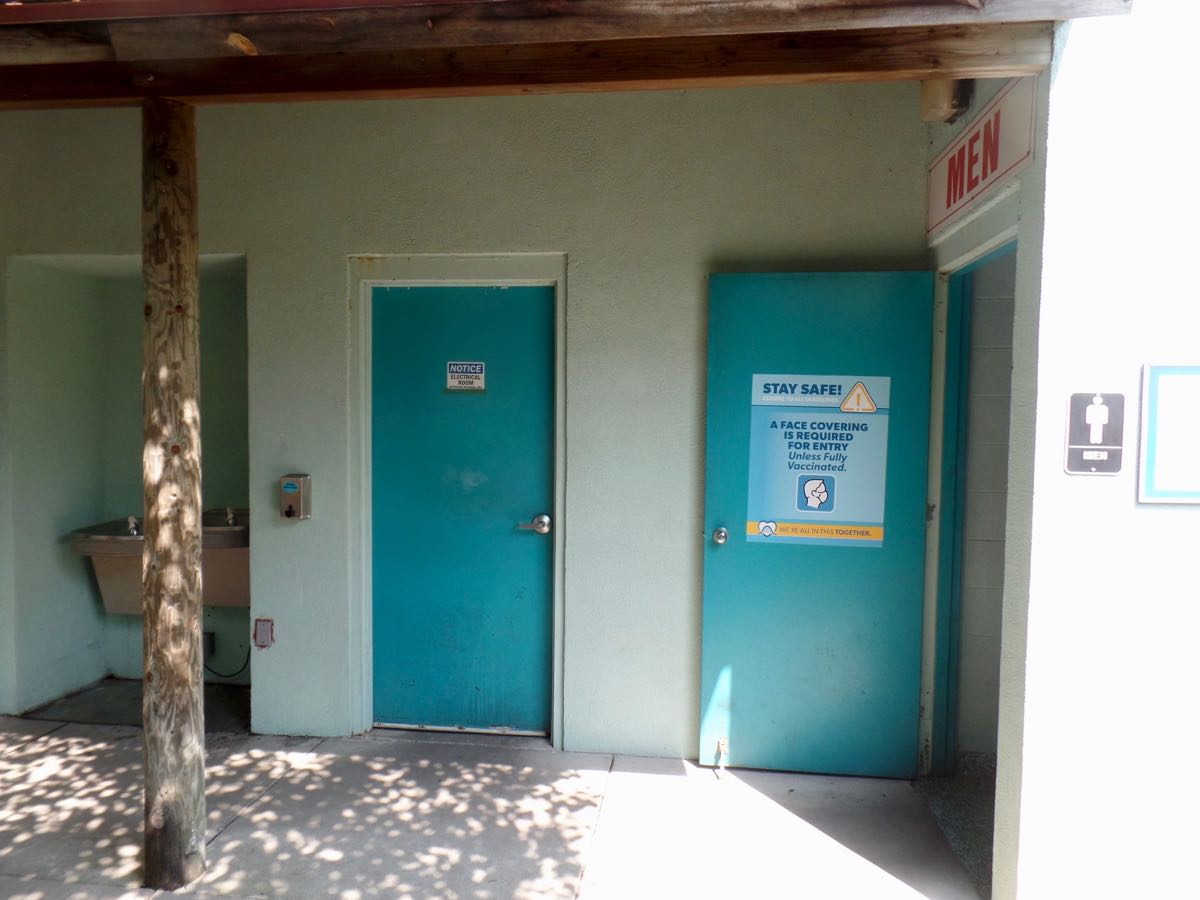 Sign at the bathroom warning that face coverings are needed except for the fully vaccinated. (I wore mine anyway.) Also one of the few buildings at the park that actually is enclosed. This is where we were when ``Pinball Wizard'' started playing. 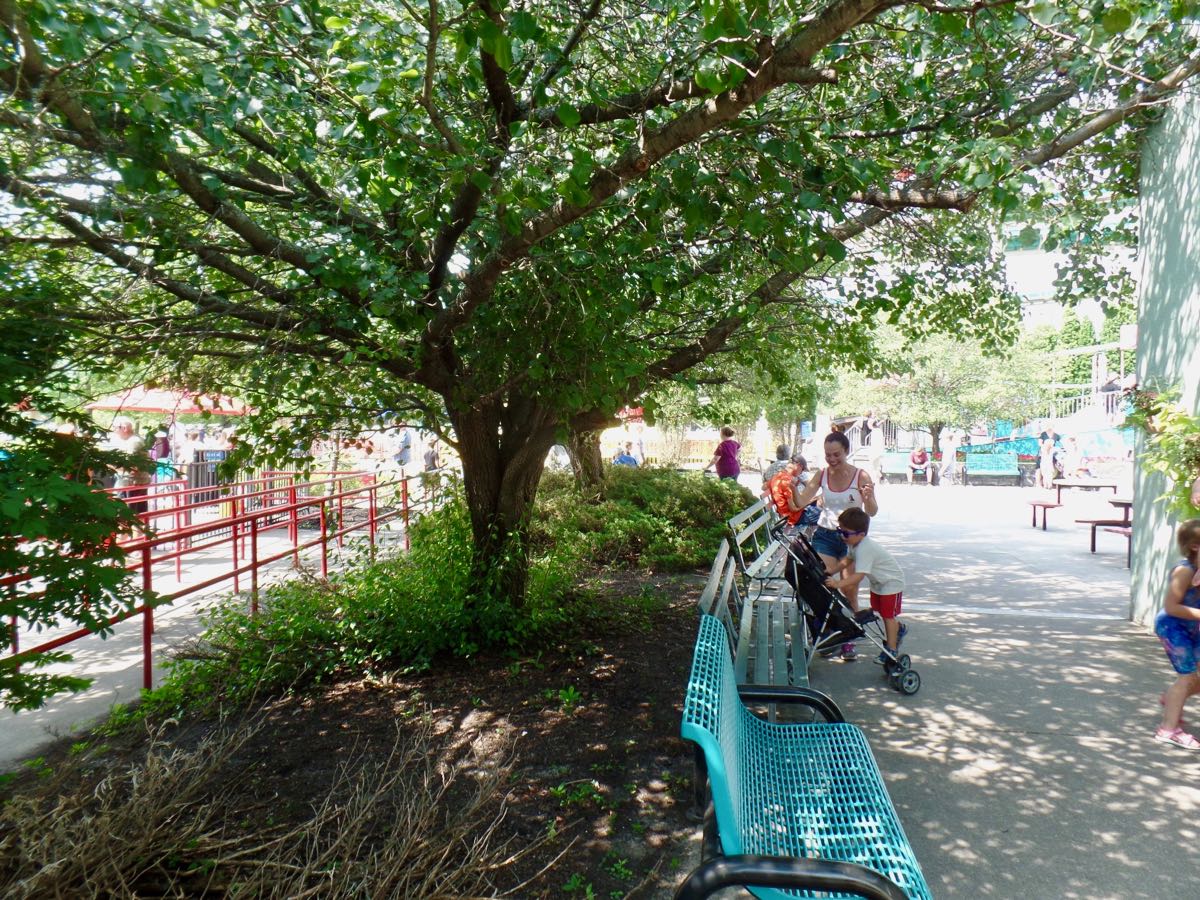 I exaggerate when I say there's no shade at Michigan's Adventure, although spots like this are too rare on the ground. 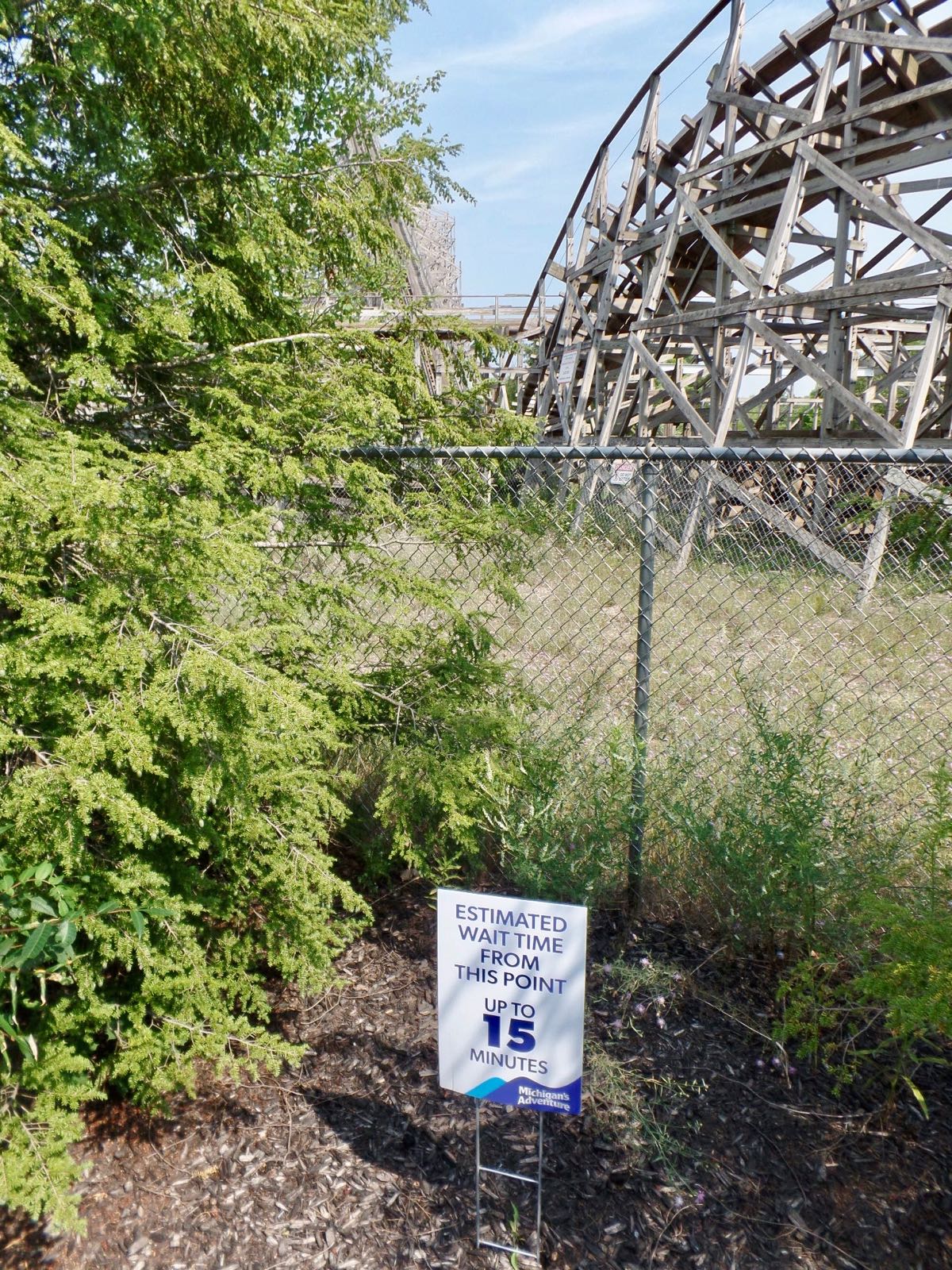 Waiting time sign at Shivering Timbers, a new addition since 2019. The lift hill is just barely visible as that mass of brown lines in the top center. The prominent part in the upper right is the final helix.

Trivia: After the crew returned to the Command Module, the Apollo 15 Lunar Module's ascent stage was deliberately crashed into the lunar surface at about 26 degrees 21 minutes north, 0 degrees 15 seconds east, a point about 50 nautical miles west of the Apollo 15 landing site, and about 12.7 nautical miles away from the planned point. Source: Apollo By The Numbers: A Statistical Reference, Richard W Orloff. NASA SP-4029.