Let's see. Regular life stuff. Two weeks ago we had the first Lansing Pinball League regular-season meeting since the 10th of March, 2020. It was the 10th of August, 2021.

bunny_hugger set the rule that to play you had to wear your mask through the whole of league night. She was ready for protests and struggling with that and we got ... nothing. Just simple acceptance. Attendance was down; the 10th of March we had twenty people attend and were readying our contingencies for a 21st person (which would require rearranging just how we play the games). The 10th of August, we had thirteen people, one of them a newcomer to our league happy to play even though he wouldn't count for International Flipper Pinball Association points.

And, like, there was some disappointing news. MWS, who's been having a great season, realized he wouldn't be able to play in finals as we've rescheduled them. The night is the same as a Nine Inch Nails concert, and getting to a NIN show outranks even taking home one of our trophies.

Also ... like ... the very thought of that sounded to me like madness. A concert. In late September. As though the pandemic isn't coming back. As though the Delta variant isn't rising, and continuing to rise, and nobody has the political will to do the shutdown we need while it's a small disaster. Instead it has to wait for even Republicans to realize there's too much death, and make this a huge disaster. I kept looking at MWS and thinking ... like ... he knows there's no chance Nine Inch Nails are playing in a public venue in late September, right? There's no chance anything is happening.

I'm haunted by a scene of a TV show I did not watch, but heard described. That there was a moment in the Terminator TV show where one of the future humans, looking around the preapocalyptic present, just loses it at two people having some petty little squabble about something they'd otherwise forget the next day. ``You're bleached skulls rotted in the sun,'' they cried out, or something like that. ``How can you care about this?'' and I keep thinking of bleached skulls in the sun when I think of MWS planning to see Nine Inch Nails.

This tells you where my head was all night. It should have been a glorious, wonderful return to form. Even the auguries were great. We were scheduled to play two of my favorite games at the venue, my group opening on one --- Willy Wonka --- and closing on the other --- The Beatles. And, hey, all through July I was playing like I had something to prove. If this was going to be our one taste of good normal things before the world shut down for six months again it could be a really, really good one.

Despite the masks league started like it should, everybody being a little late and a little disorganized. I made a small mistake, from being out of practice, counting out the slips of paper we use to draw lots and organize into groups. But 7:00 came and we were off to a bunch of good pinball play, we'd hope.

My first ball on the first game, Willy Wonka, I bricked. Drained before I knew what happened. I can deal, I can get it back together, there's incredible heaps of points in this game and when we played it for dollar-game fun a couple weeks before I crushed it. I can get it back. No, I can't. I put up a miserable game, just a terrible one, one of the worst ones in the league. Medieval Madness, on which I kept having killer games for, like, the pin-golf tournament where score doesn't matter, I start to have an okay game, and then fail to collect the extra ball, easiest shot in the game, and something that could easily have doubled my score. This is the only score I have all night that comes close to the median for the league. Indiana Jones is another fiasco for me, although the group I'm playing with has a similarly lousy time of it. Game of Thrones I figure, hey, I just put up that half-billion-point ball with

bunny_hugger. I can do a hundred million points on my own, right? I can't even launch the ball well, this game. I manage to creak out 25 million points, which is about what the game gives you by accident. And twenty million points of that are on the video mode, a very basic ``swordfighting'' mini-video-game, where you have to hit both flippers a bunch of times. And I barely won that.

Ah, but, at least I could close out on The Beatles, and finish this one beacon, this lifeboat night, with the game I most want to play and on which I always have a fantastic game. I could how did I lose the ball already? How did I not make a single loop shot? I ... I ... this just sucks. And so it did. As awful as my Game of Thrones was, my Beatles was --- proportionately --- worse.

The night went pretty quickly, all told, and smoothly. Benefits of a small group; the night ends faster, and it can turn into people hanging out and chatting and even doing things like just hanging out with the new guy. Where I started to recover my ability to play pinball at all, and he went running up onto the high score table of The Simpsons. The live DJ was back, playing more music than I would care for, although only a handful of people ever got up and danced, never in groups of more than about three. I suppose we're finding that live DJ music just isn't working, not as a Tuesday night thing. I took

bunny_hugger to some consolation games, such as on Guardians of the Galaxy, and had one okay and a bunch of lousy games on it, leaving me feeling all the worse.

Ultimately the problem was me. I went in to the night feeling like, this is it. This is the closest things will ever be to okay for the rest of the year. With the way infections are rising it's going to be murderously irresponsible to hold the next league night, and everything after that is going to be wiped out, for the foreseeable future. (In point of fact, the number of daily infections seems to have levelled out at about what it was two weeks ago, and the rate of infections even --- as of Monday afternoon's reporting --- dropped.)

And, at the end of the night, as we walked home,

bunny_hugger --- who'd had a great night, by the way, third-best of everyone in the league, to her surprise --- began to share her anxieties about running the league through another Covid-19 wave, and about the pandemic, and about school starting, and I just ... lost it. I hollered about how this was the end, the last tiny island of fun we were going to see for the rest of the year, and it stank. At least for me; I didn't know how well she had done, and that she might have had fun while I was feeling betrayed by old friend tables didn't matter to me. The 10th of March was no particularly special night, but it was a pretty nice one, a memory I could hold on to and feel good about. This? This was just hot and muggy and lousy and depressing and facing miserable days ahead.

She asked if, given all this ... did we want to call off our plans for Wednesday? Plans which, it turns out, would cause the destruction of my car by flood waters. But plans which were, essentially, frivolous, something we could very easily avoid and that maybe, properly, we should, as not-essential but potentially virus-spreading activities.

And ... no. No. Facing a long miserable sad winter I wanted one more chance. One more good day. Our share of simple recreation before we had to accept the miserable next lockdown. Which is putting on the next day exactly the overloaded expectations and emotional charge that made a lousy game of Willy Wonka such an event. But ... for everything that we gave up? And everything we would have to give up? And knowing how much so many people refused to even slightly cut back on? I wanted this and I was going to take it.

Here, let's stroll some more around

bunny_hugger's parents' town. You've see these places before, but in slightly different circumstances, which is all of my photographs anymore. 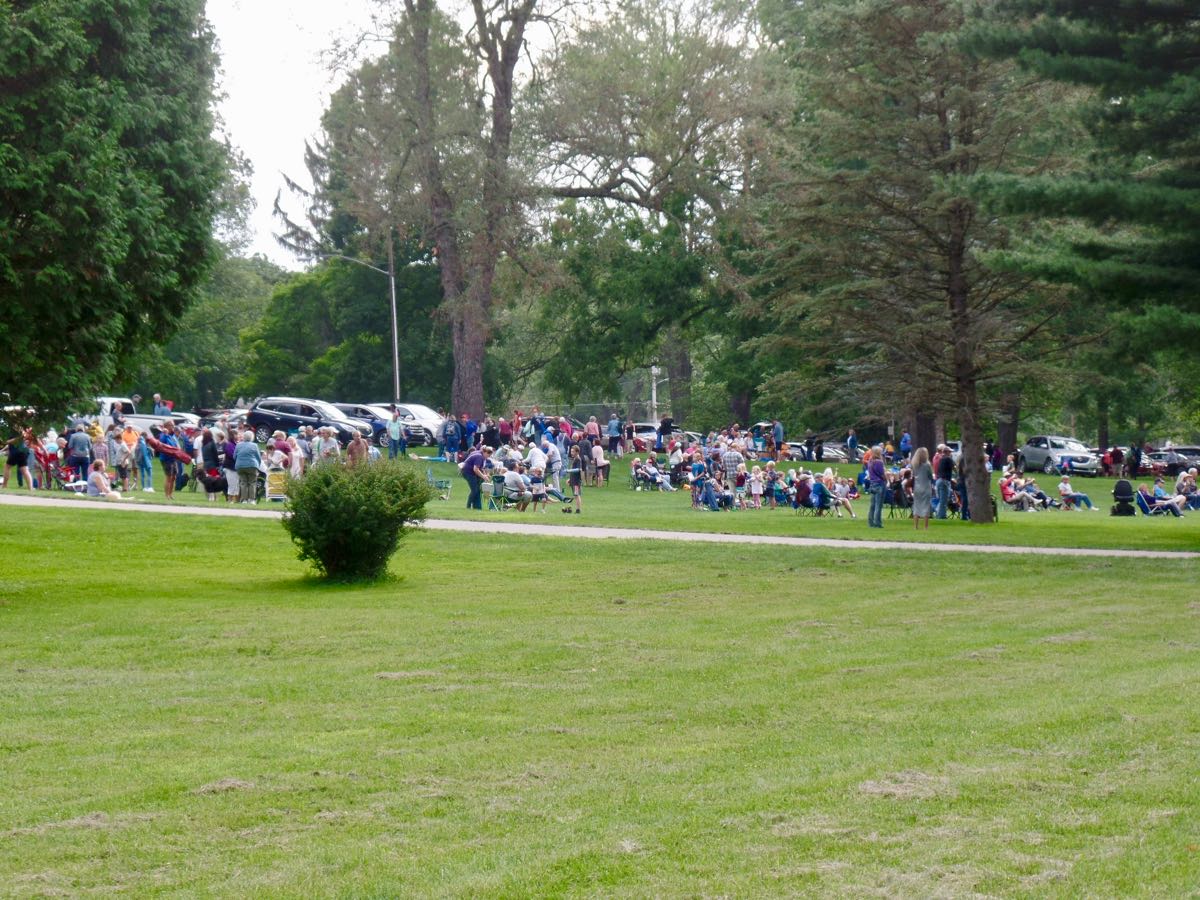 It's not a packed crowd, at the concert in the park, although that might be because it was 90 minutes into the show and things were probably wrapping up. 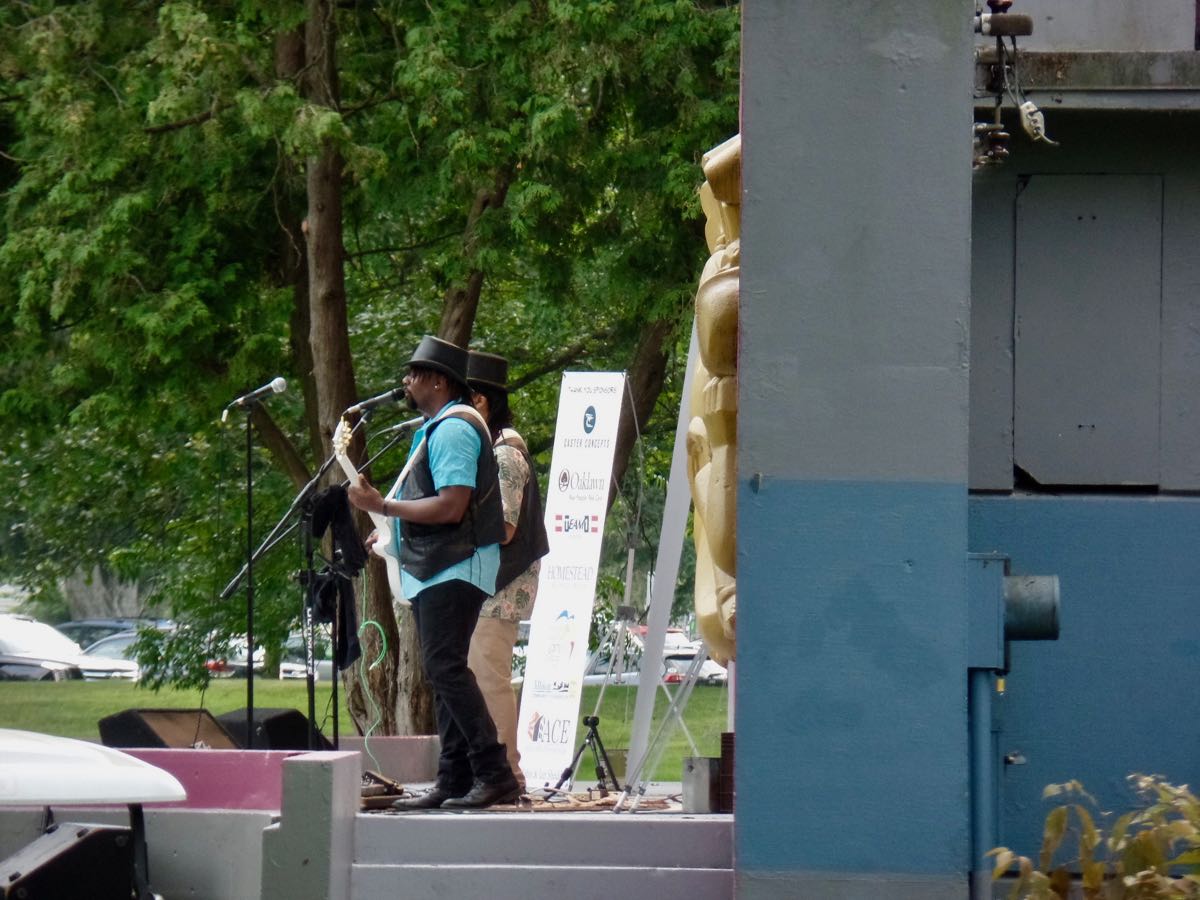 The band; I don't know who they were. They were playing ``Purple Rain'' as I took these pictures, though. 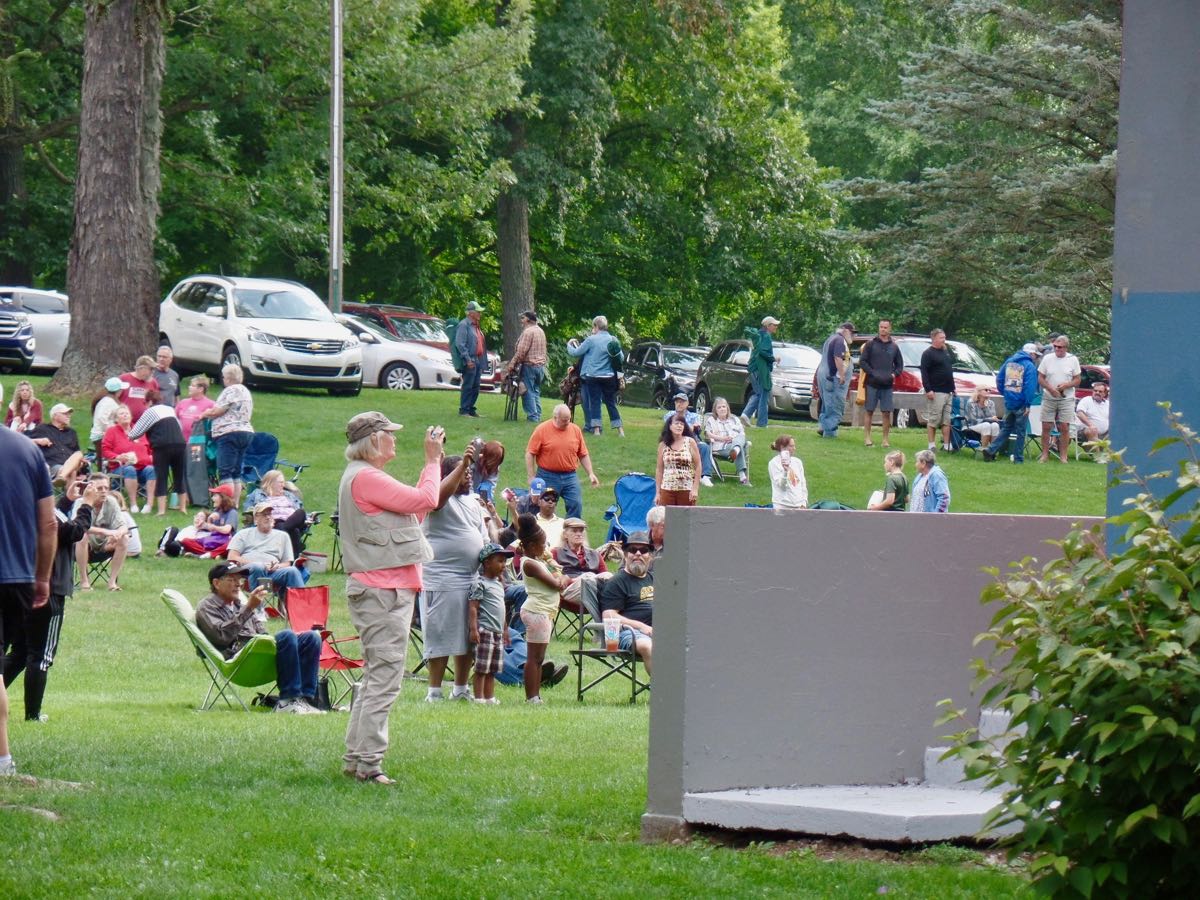 Fan getting some pictures of the performers.

Trivia: The first text appearance referring to breakfast as ``the most important meal of the day'' is ina 1917 issue of Good Heath magazine, edited by Dr John Henry Kellogg. Source: Grocery: The Buying and Selling of Food in America, Michael Ruhlman.