But here's the humor blog this past week, squeezed out of mostly old stuff through my lassitude and general spoonlessness.

Now back to Cedar Point photos. If I can rouse the energy I'll resume the straight narrative of what was happening and what all this was, too. 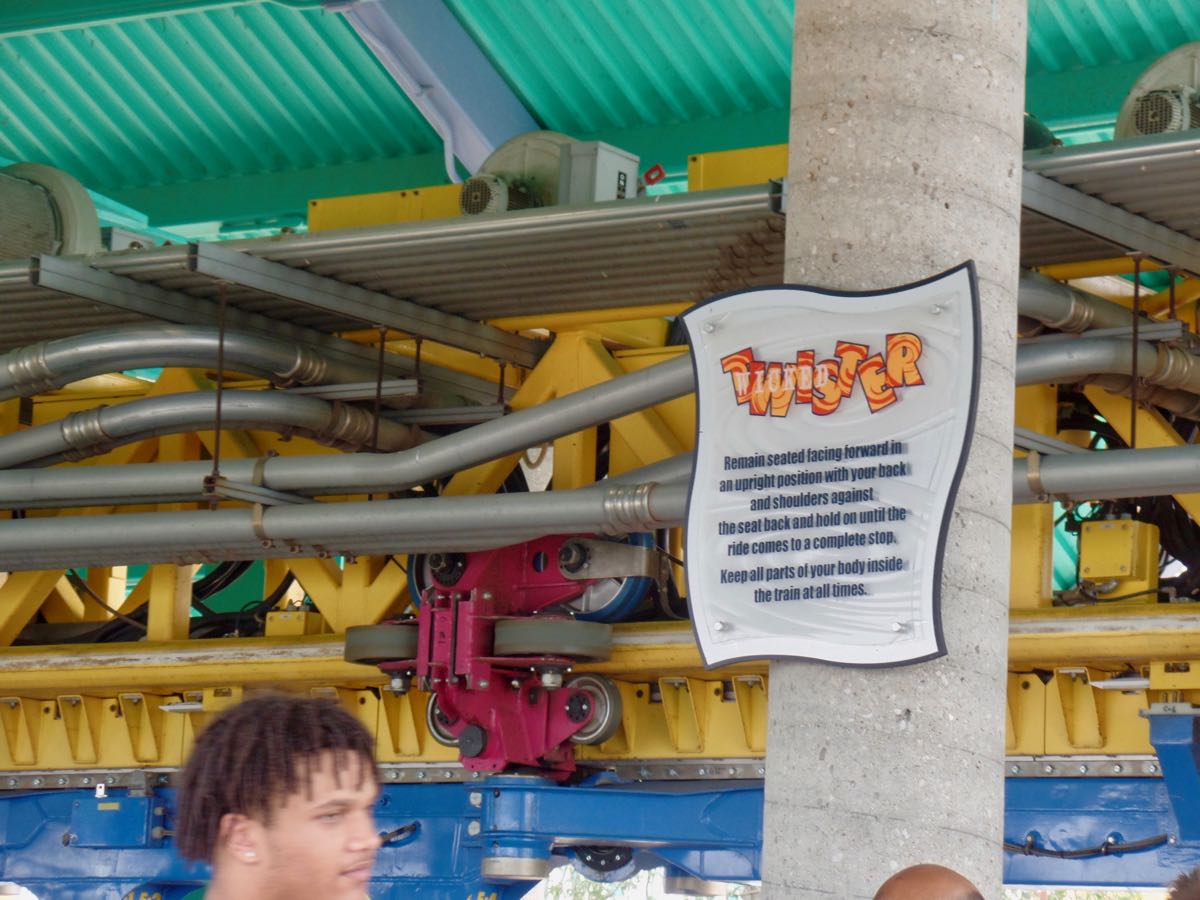 Ride instructions at Wicked Twister, mostly about not messing around so you make your head fall off. Also, you get a good look at the wheel arrangement for a roller coaster; notice there's wheels on three sides of the track, there. 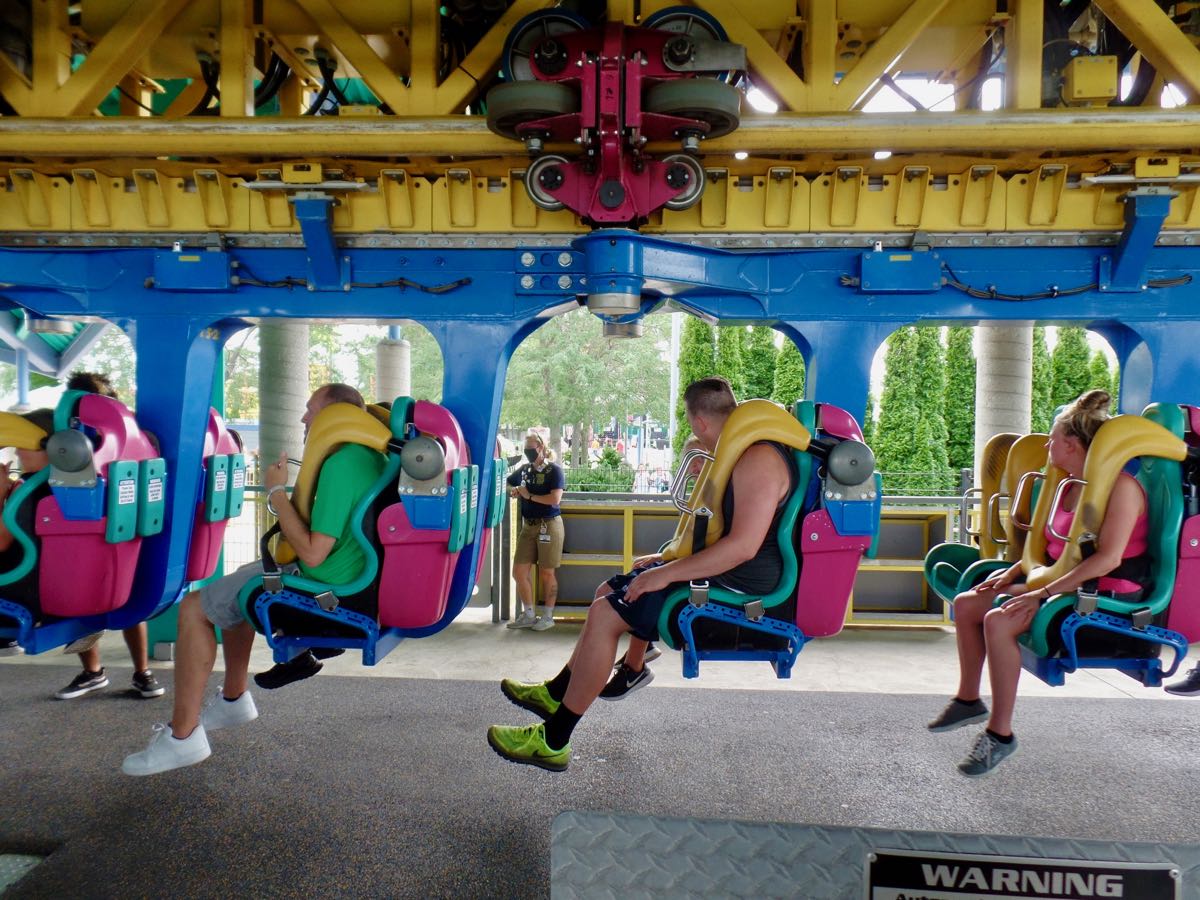 Train ahead of us loaded up and ready for that sweet sudden linear acceleration forward. 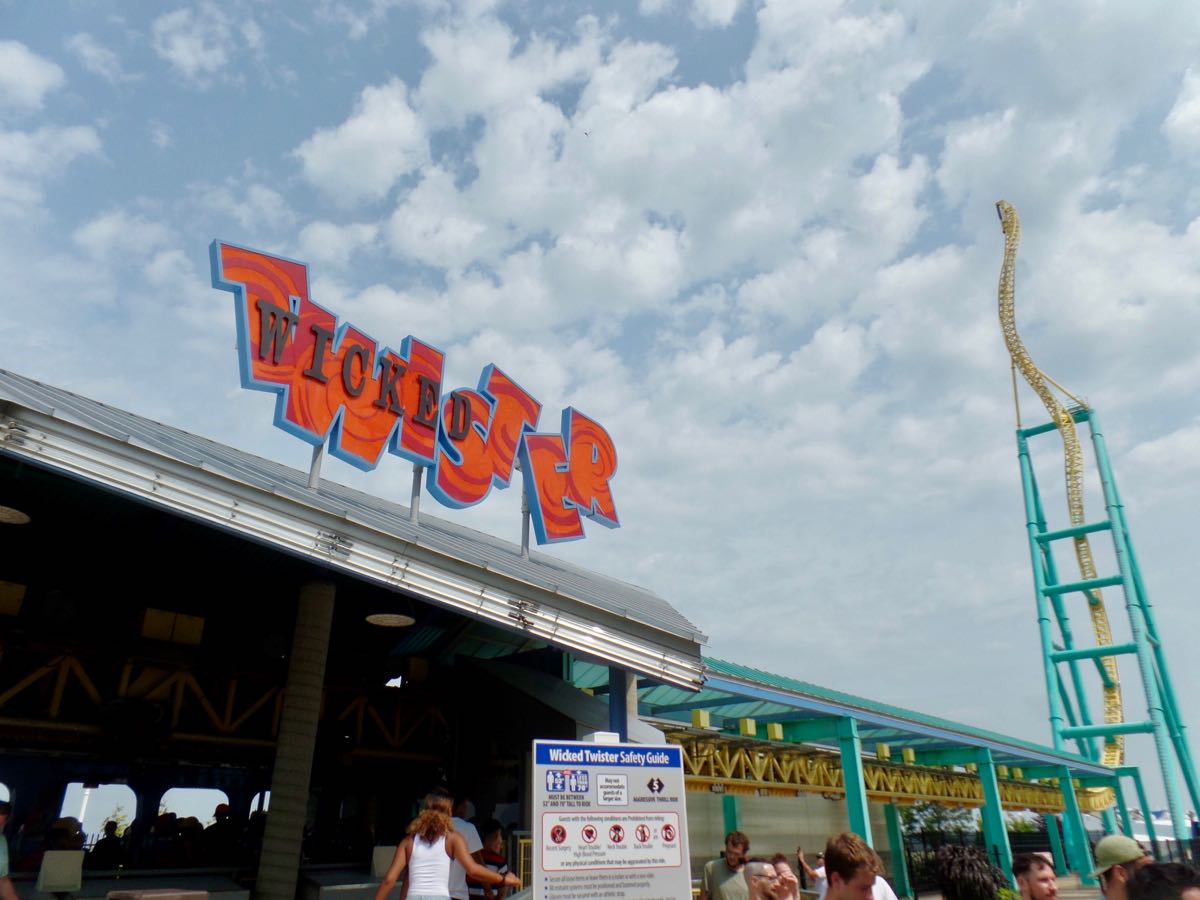 Our first ride done! We get another look here at the station, and logo, and the forward hill. The ride shuttles back and forth three times, going up that hill in front and falling back and accelerating up a hill behind the station. 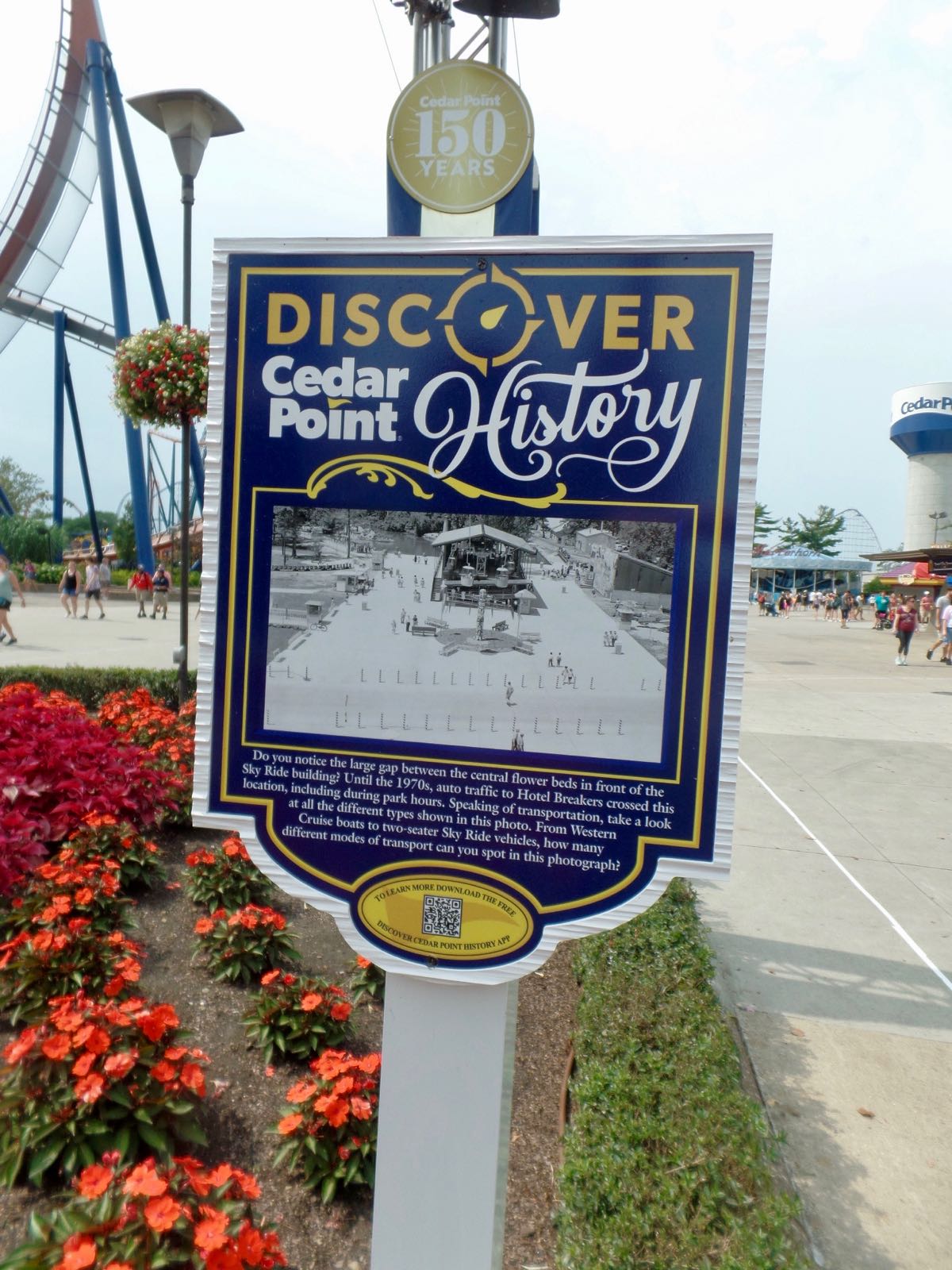 A new discovery on the way to get something to eat: Cedar Point History plaques. Which we loved and photographed each one we could find. We love these at any parks and it's amazing Cedar Point hasn't had them up in previous years. The astounding thing revealed on this plaque: that through the 70s there was car traffic through the Midway, so that people could drive up to the Breakers hotel. We would later see some park maps from the 60s and couldn't quite place where the traffic would have to have gone. But the maps may have been not strictly representational, too. 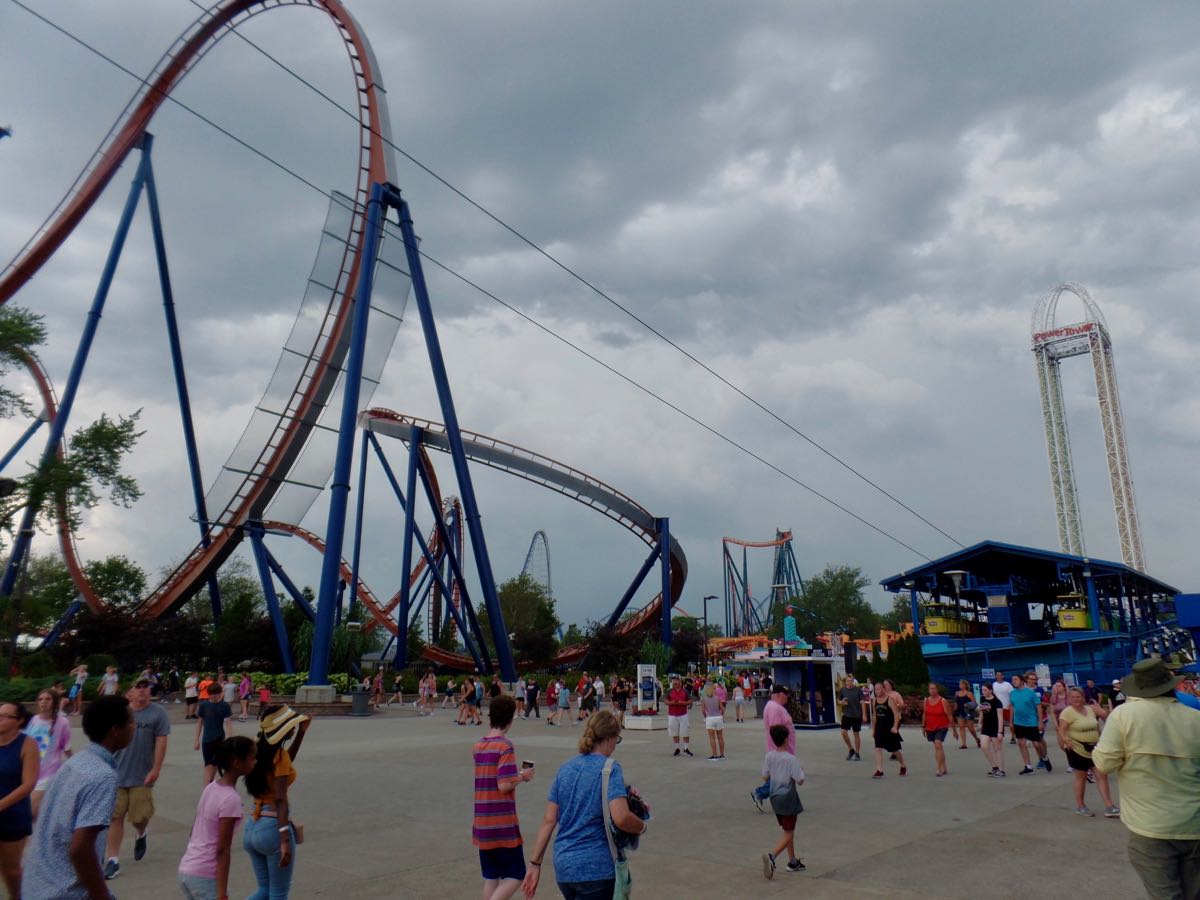 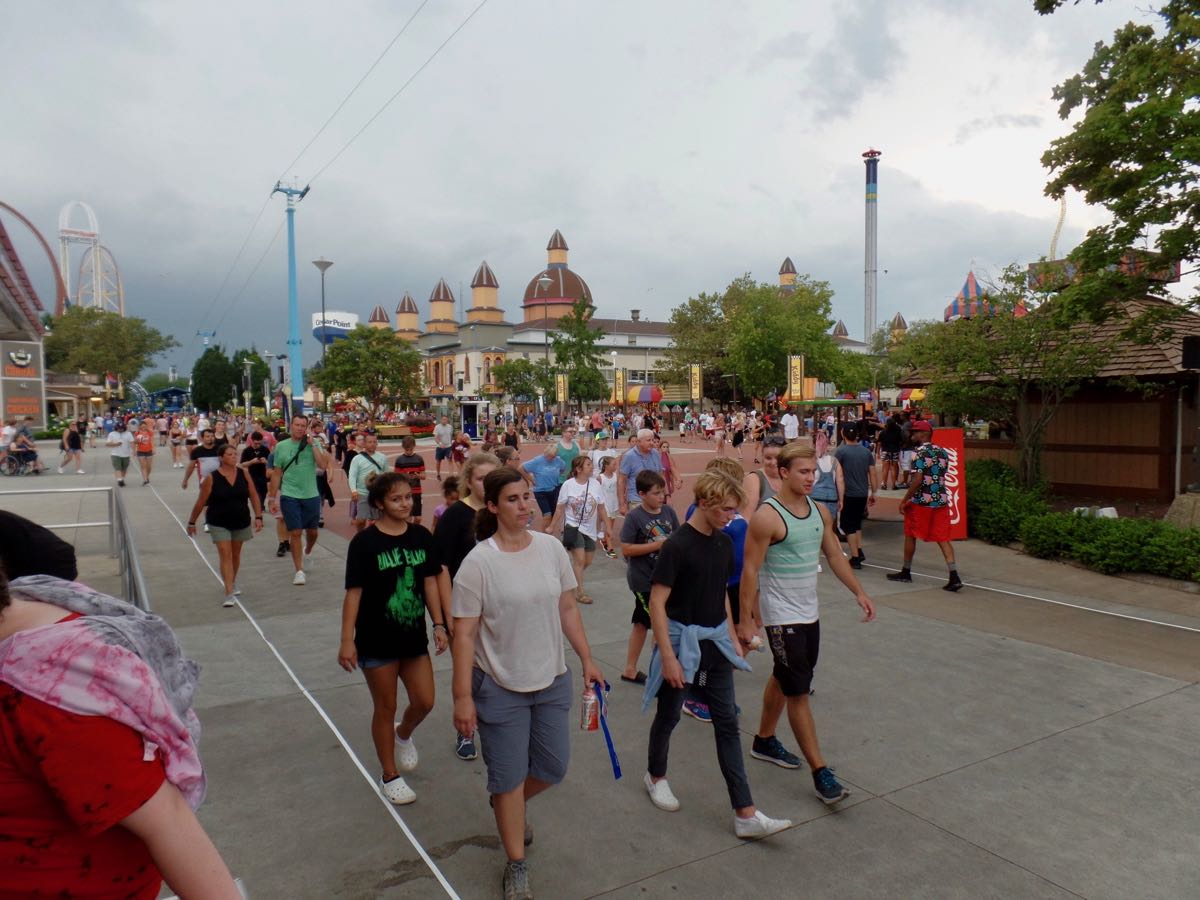 And what in the skies is causing a sudden huge mass exodus from the park?

Trivia: Construction of the Benjamin Franklin bridge, between Philadelphia and Camden, New Jersey, began in early 1922, although instead of the traditional digging of a first shovel-ful of dirt, the ceremony tore loose a plank of wood from one of the piers which the bridge would replace. Source: Engineers of Dreams: Great Bridge Builders and the Spanning of America, Henry Petroski.