So let me start talking Cedar Point. We arrived at the new entry booths, noticing how now there's a lane for people going over the Causeway down to the Chaussee, the old and terribly outdated access road now used mostly by people who live on that strip of land, directly. Couldn't remember if that had always been there. I steered away from the self-check-in booths so that I could ask the booth attendant for a park map. We have one from the park for the season, but rumor is they want to get rid of them in favor of ``just download an app!'' and I want them to know how there's demand for real maps.

Our first ride was the Midway Carousel, which we couldn't resist since it's nice and up front and flanked by that giant 150 Years sign. And we could confirm what was true, apparently, all season except when we were there for our anniversary: their band organ was repaired! It was down when we visited before, so they reverted to the CD player with the one disc they've been playing nonstop for twenty years. But now? They had the real organ, blasting music out. It was so bizarre to hear songs we couldn't recognize. Word is that the control mechanism isn't a scroll reader anymore, but rather a computer that you can just put Midis on. It's less romantic to have a band organ get its instructions from a USB drive. But that does open up the playlist; rumor is the organ could play more than a full day before it was forced to repeat. This is just great.

After that, we got some pop, because it was seven million degrees and sunny. We tried to find a Freestyle Coke machine that didn't have an enormous line and wasted more time doing that than just waiting through the line would have cost us, which is par for the course. But once we got that, our target was Wicked Twister. That's the thing that brought us to the park, after all, since it's closing forever ... I think this weekend? So we wanted farewell rides on a shuttle coaster that I liked, but that made

Wicked Twister has never been one of the park's top draws. It's tucked away along the beachfront, where it's easy for people who came to Cedar Point for the waters to see. But if you came to Cedar Point for the waters you're not riding rides. It's hidden behind the Coliseum, and even the relocation of the Giant Ferris Wheel over there didn't make it more in the path of anybody. When it opened in 2003, it was already upstaged, as construction had begun on Top Thrill Dragster and everyone found that more interesting than this U-shaped coaster that rocks you forward and back several times. Its central gimmick is a linear induction motor, so that you get this nice burst of speed with no apparent physical cause. It's a motion that I can't get enough of. But it also uses the motor to brake, and slowing down like that, in reverse, is more than

We were braced for an enormous wait --- if nothing else, it would break important laws of physics if the coaster had a second train --- but then, Wicked Twister never draws long lines. Even now, with its doom announced, the queue wait time sign said it was about 20 minutes.

bunny_hugger had some skepticism, noting that the queue estimates have been lousy since Cedar Point wants everyone to use an app instead. But we were here for this, so we could ride it now or wait for later and hope.

Turns out the sign was about dead on. If it wasn't exactly twenty minutes, it was close enough, and there are at least some parts of the ride where there's shade. And we got to look out at the shore, the great mass of Lake Erie. Somewhere on the other side of that is Waldameer, for example, and if you go along some rivers you might even get near Fantasy Island, which local investors hope to bring back from the dead.

We figured not to wait for a particular seat; in fact, I think they might have been assigning rows to avoid queues getting too long. That's all right. We got a central seat. And, boy, you know? Going from zero to fast in no time? Going straight up? Getting a few precious moments of microgravity, and seconds of free-fall? That's some great stuff, not replicated by anything else at Cedar Point. I haven't yet heard what they're going to replace Wicked Twister with, but it's surely not going to offer that. Even

bunny_hugger agreed the ride was more fun than she had remembered. Maybe the total break from riding has let us both appreciate roller coasters as closer to new experiences.

The next thing we wanted to be sure we didn't miss was pins. Cedar Point added collectible pins, many of them with vintage or at least retro designs, for sale for the season. We were foiled in getting any back in June, as we just trusted them when they said they'd be open until 10pm and were not. Now we were going to get pins, and secure them, maybe bring them back to the car if they were too much burden to carry all day. (They were no burden at all; being pins, they're quite small.) And while we were shopping they started drawing in the shelves and battening hatches. As with our anniversary trip, there was a storm coming in.

We decided to go get something to eat --- garlic parmesan fries, particularly, and some pop --- and wait out whatever the storm was. The cashier at the fries place asked if we were getting these to leave the park. We explained no, we'd come all the way from Lansing. She warned that there was a major storm front moving in, something that'd be going for hours. It would be intense. They might have to move all the remaining guests into the storm shelters, for three hours or so. If we could leave, we should.

The park's music stopped, and began blaring that weird tone sequence we'd heard in June, the one warning that a severe storm was coming, and that people should seek shelter immediately. (Not while we were in front of the cashier, but near enough.)

Granting the storm might be that intense and that horrible and that long? I had my iPod Touch and tried to get online using the park's Wi-Fi, to judge how big the weather front was and how long it might pass. But it seemed to us likely that a storm was better spent in a storm cellar than in a car on the Interstate. Awesome as it might be, in concept, to drive to Cedar Point and ride two things and go home, we would stick it out.

I am aware that, had we made the choice to go home, and maybe return the next day or week, I would probably not have killed my car.

So now some pictures, which here start from the point that the storm rolled in. 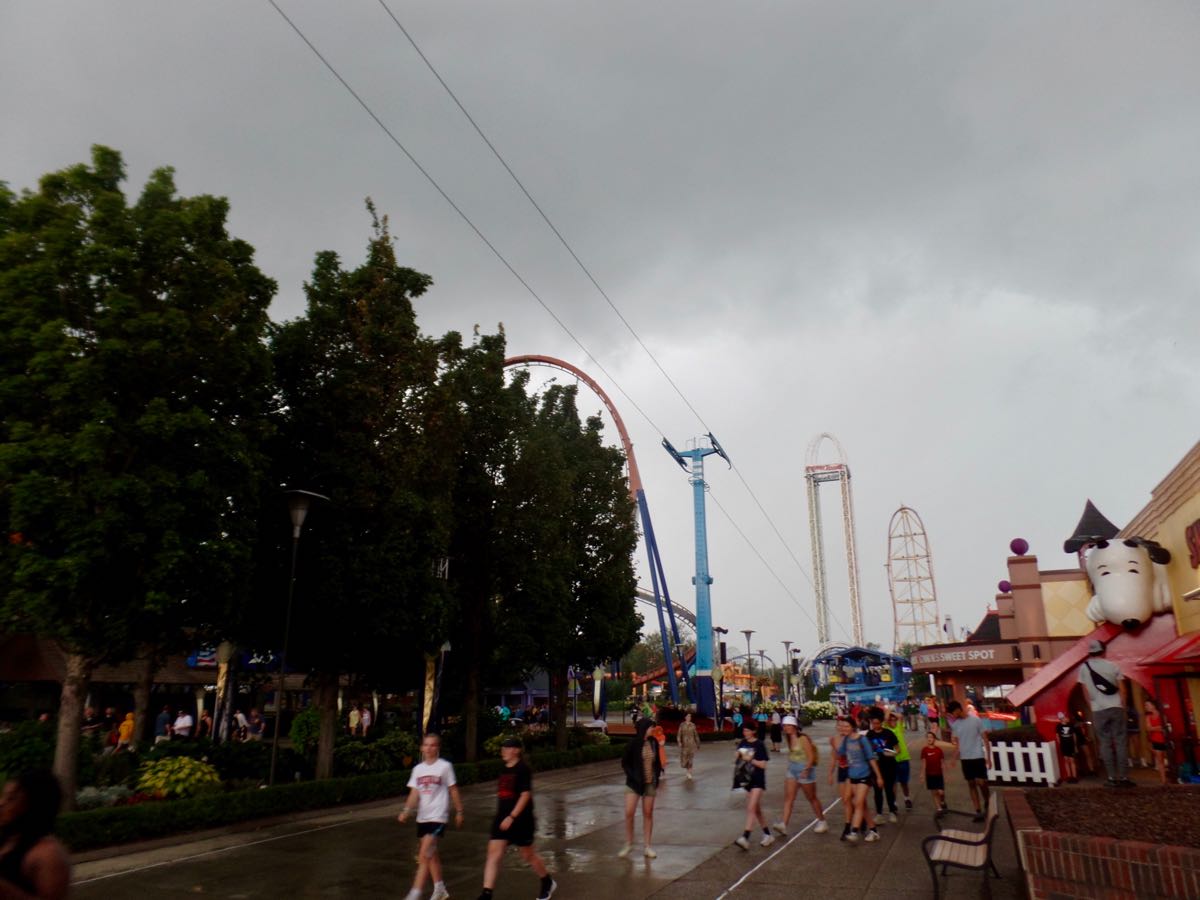 And there's the storm come in, the second time in two visits that we'd had to run into the Coliseum with our cheese fries and pop to not get soaked as alarming storms roll through. 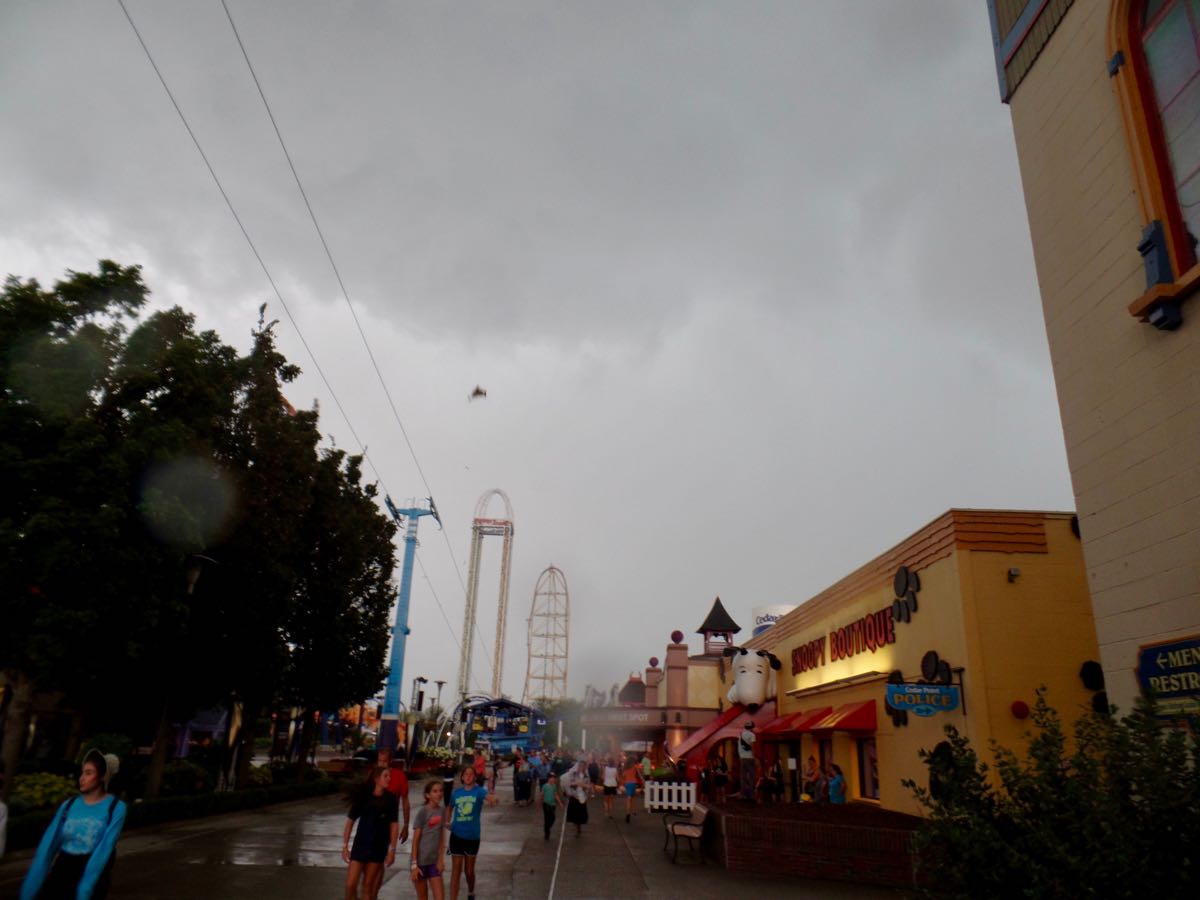 Rain and high winds rolling through. I'm not sure what that black patch in the center of the picture is. It seems big for a bird, but it couldn't be, like, a jacket that's been blown loose in the wind? Or something? 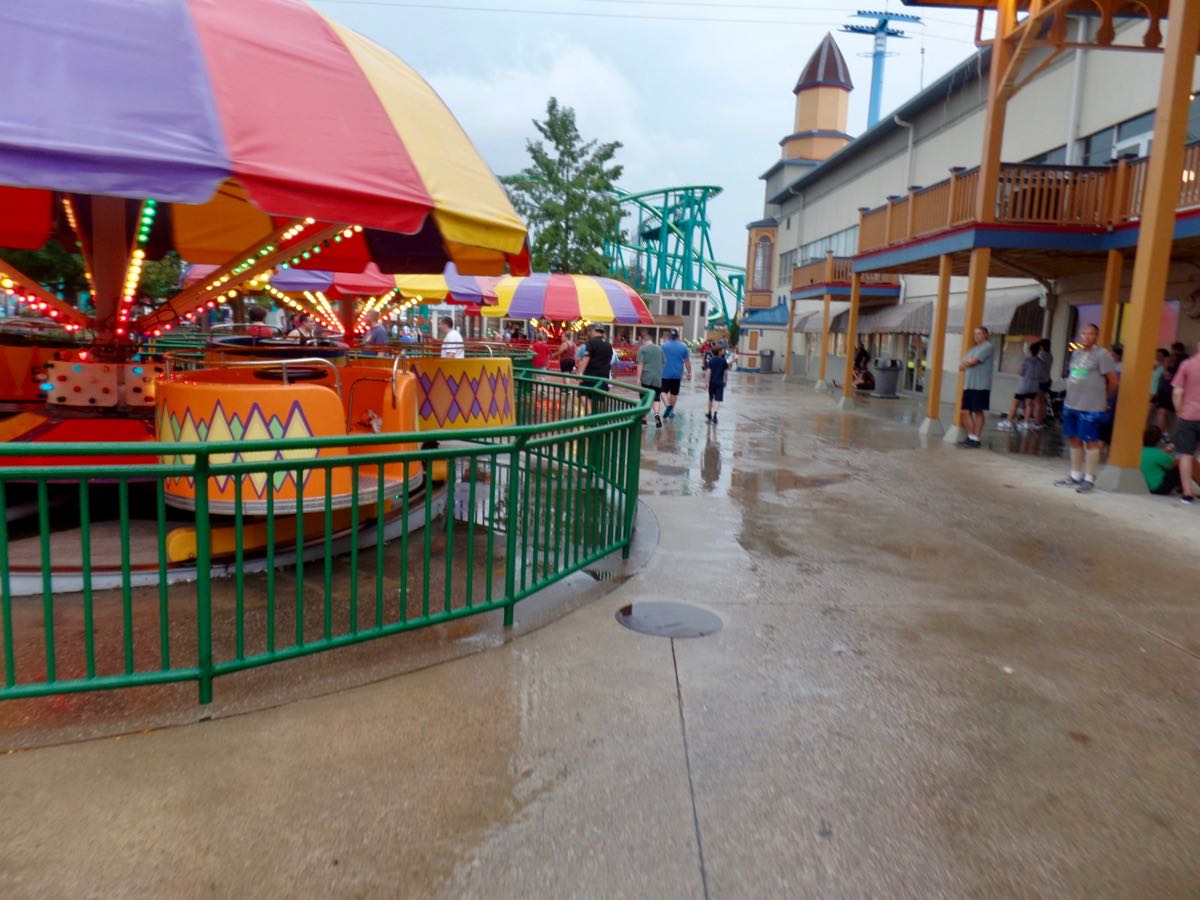 The rain passing, sooner than we feared, and we emerge into the Kiddie Kingdom. 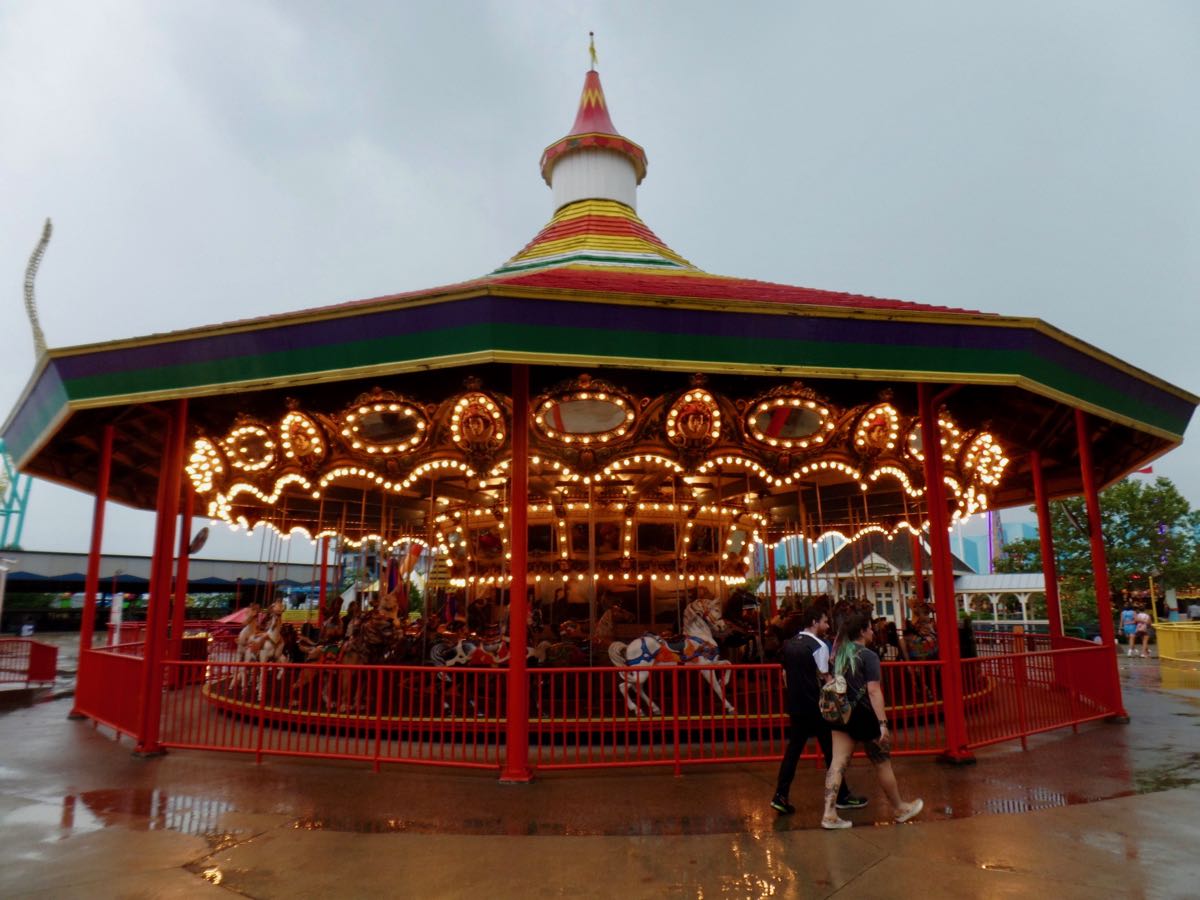 The Kiddie Kingdom carousel, lights on and getting ready to run again in the wet. 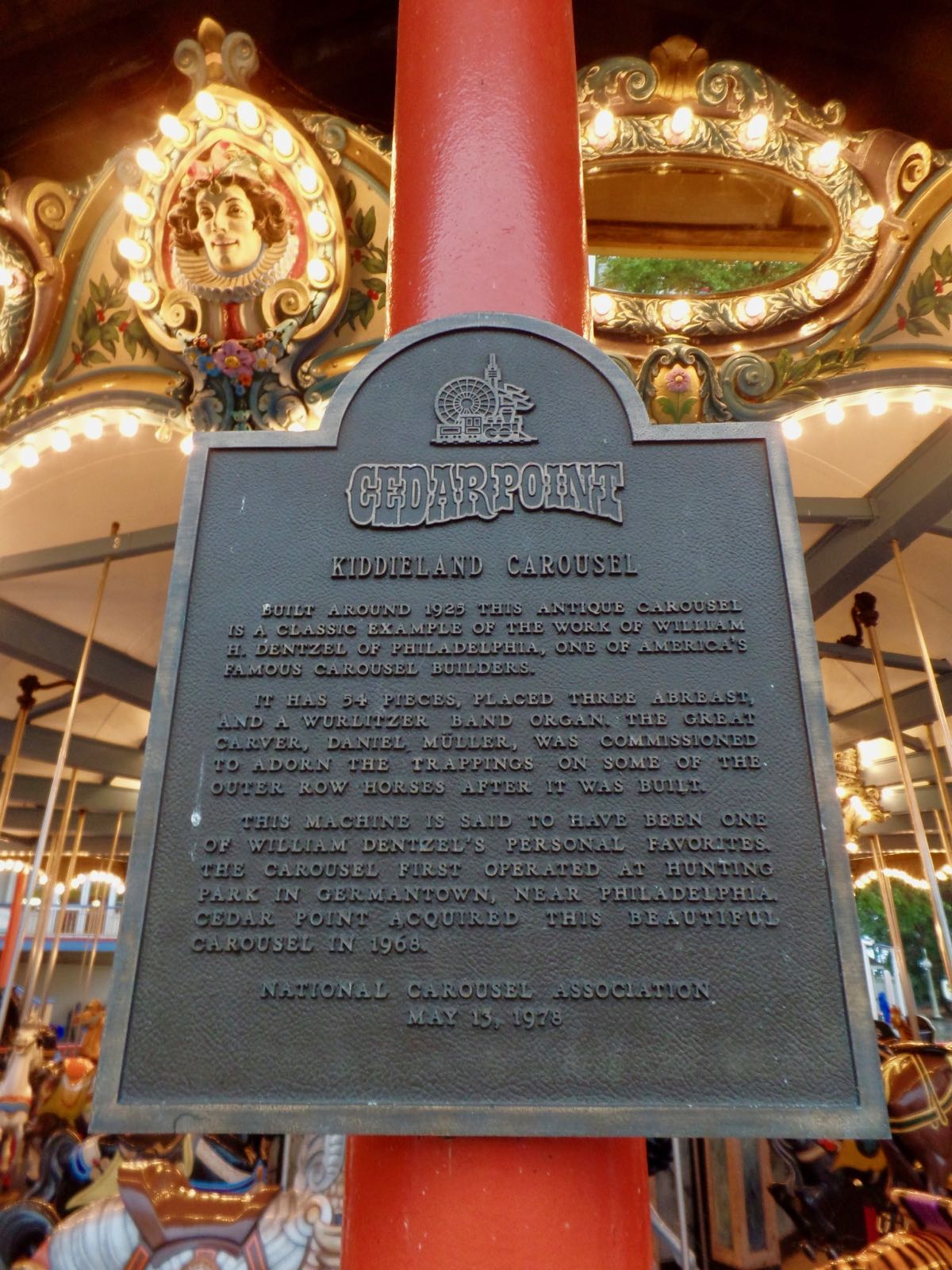 Plaque from the National Carousel Association explaining the history of the Kiddie Kingdom Carousel. 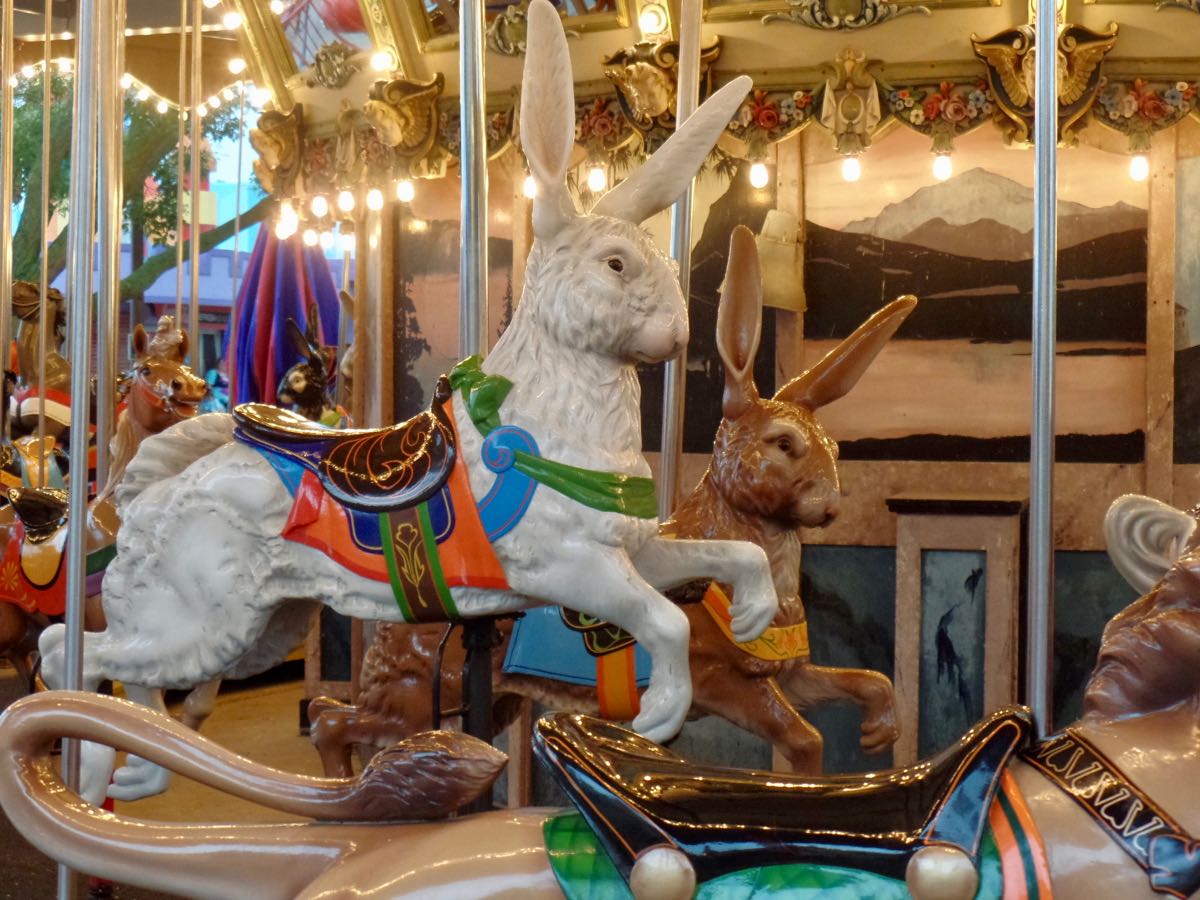 Two of the rabbits on the Kiddie Kingdom carousel. Not the ones we'd been aiming at riding.

Trivia: The New York State bonds issued to build the Erie Canal offered 6 percent yield, paid out of future canal receipts. Baring Brothers assured London investors that they would be paid in pounds for the bonds denominated in dollars. Source: A Nation Of Deadbeats: An Uncommon History of America's Financial Disasters, Scott Reynolds Nelson.