So the rain came, and it was a lot of rain. An intense rain. We huddled into the Coliseum again, finding the Monkey Mania game was turned off still, or again, and offered two seats where we could sit down and eat. Though we snagged toothpicks, we still got our hands covered in garlic-parmesan sauce, and ventured out to the bathrooms, giving me my best shot at dramatic storm photographs. And I got enough Internet to see that the storm looked to be intense for under and hour and then extend for ... goodness knows how long after that. In the end it was something like two hours before the waters receded enough that we could go outside, and even see evidence of rides coming back into operation.

bunny_hugger's childhood favorite. Somehow the two kids ahead of us in the queue were able to get to her choice, the black-and-white rabbit, before she could, even though she knew just where it was and could walk directly to it. Kids, you know? The Kiddie Kingdom Carousel's band organ has not been repaired, or else it's been down both visits so far.

A happy discovery as we got out again were Cedar Point History plaques. (We'd seen one before hiding in the Coliseum.) I was delighted. Cedar Point has finally started to acknowledge its history is interesting, and (let's admit) salable. They've been selling nostalgia in T-shirts recently, and in the pins, and in bits of the park decoration. Historical plaques are a natural development from that, and a good one.

We didn't have a particular target in mind, especially with things not yet running, but aimed for walking up the Frontier Trail and maybe back again. The plan was to get a proper daily walk in while the park recovered from its drenching. With stops, though, that let us confirm some good things. Like, the China Shop run by that extremely old German-seeming woman was still open, although we didn't see her. The shop's been there for a half-century now, though, and sure has always seemed like a holdout from when the park allowed independent vendors. We've been worried about the woman who runs it, but if the place is still open at least .. she hasn't died or retired long enough ago they've run out of inventory? Though a lot of inventory was Cedar Point sesquicentennial merchandise.

More ambiguous: they cleaned the moss off the roof of the Panda Express. This is a food place at the start of the Frontier Trail and moss had so overgrown the roof that it looked like it belonged there, and should be there. I guess the roof looks more sond now that it's all shingles, but it's much less interesting too. The candle shop still technically exists, although the woman who did the candle-making has retired and they now have almost nothing but a dip-your-own-candle station. The vegan/vegetarian/gluten-free food place was open, and we considered that as a possibility for dinner again, which we missed again.

More startling at the back of the park, near the Camp Snoopy enclosure, was to see that the Snoopy bounce house or whatever it was exactly at the front was gone. It's replaced with a little rest area for parents, Adirondack chairs and all that, and wooden teepees for kids to go inside and then leave. Can't fault the park for putting in more places to rest while kids burn off energy. Nor, really, replacing the big Snoopy figure. It was posed as Snoopy sitting on top of a big cylindrical dome and I could not look at it without seeing Snoopy on the toilet. So maybe it's an improvement although it does change the look of the Gemini Midway over there.

We completed our orbit of the park in time to see them opening the gates for the Scrambler. We never ride Cedar Point's Scrambler, just because there's usually other things going on, but now? Sure, we wanted to get on a third ride that day. We maybe could have waited a ride cycle or two, to let other people's pants soak up the rain on the seats, but where's the adventure in that?

Also, off that ride, we encountered a curious bird. It seemed to be a white, if not albino, sparrow, puttering around minding its business. An amusement park must be a good place to be a strangely-colored animal of any kind. We spent a good while watching it hop around, digging some kind of food out of the ground, and looking back at us, confident it could get away if we were up to any mischief.

The park was coming out of the storm. 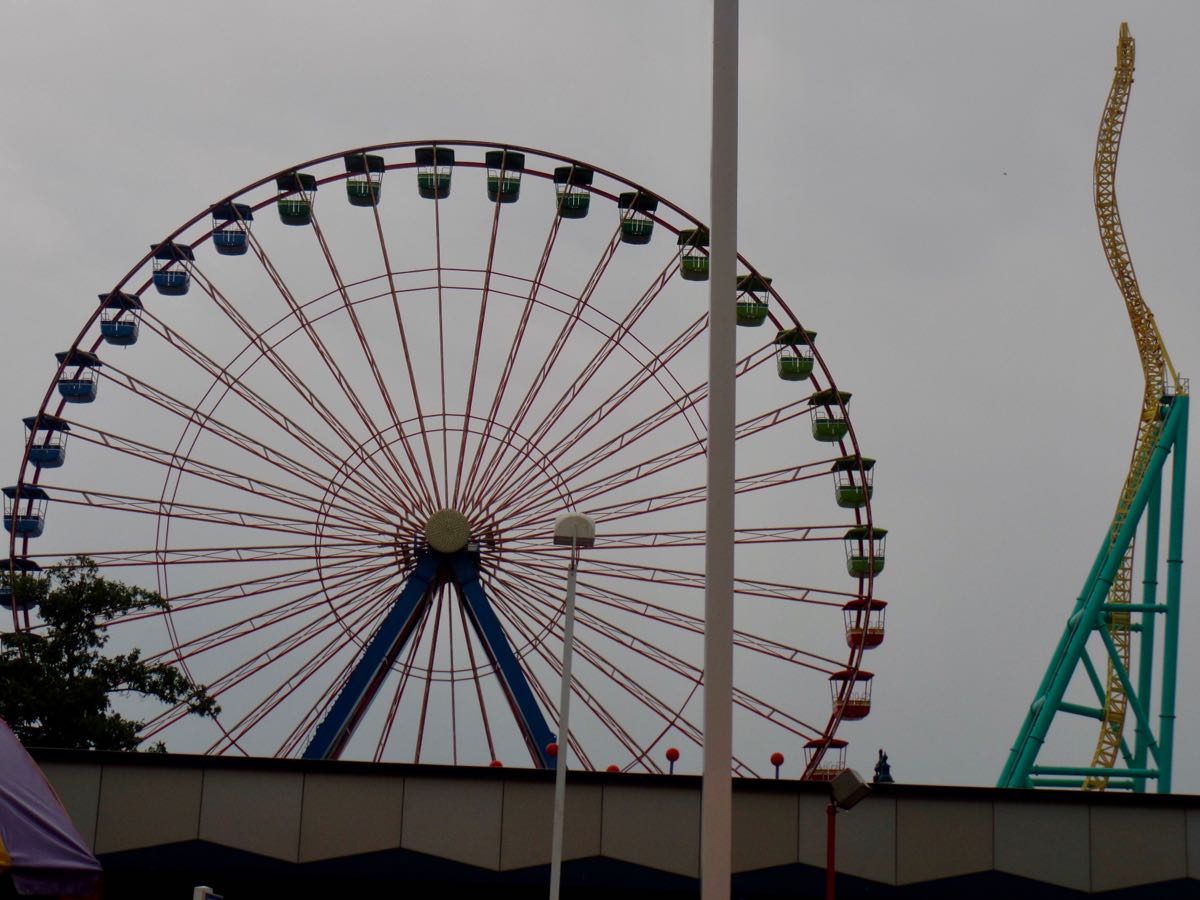 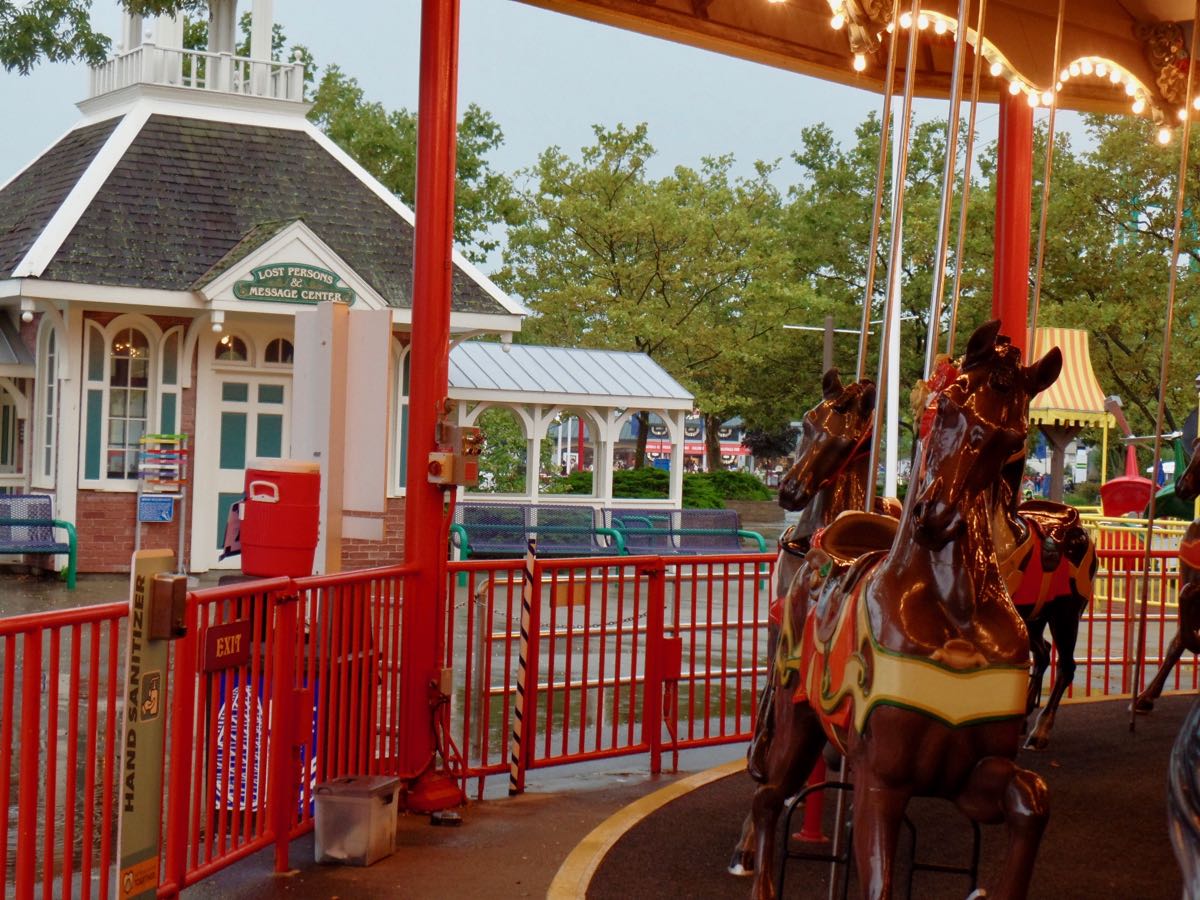 The Kiddie Kingdom carousel and behind it the Lost Persons center that clearly used to be the station for a train ride. Cedar Point claims not to have the power to make public-address announcements, so if you lose someone, that's the place you have to know to go. 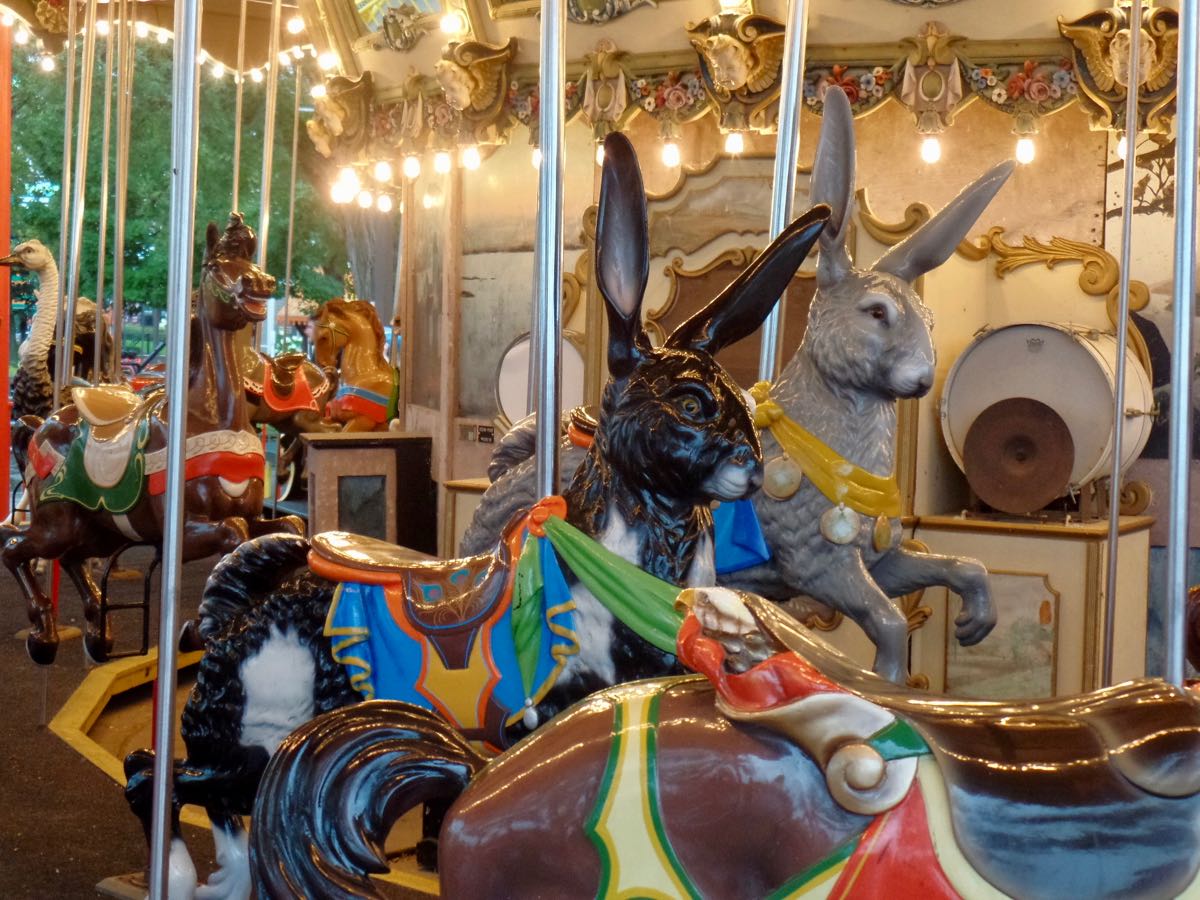 bunny_hugger had been aiming at. Also the band organ that so far as we know has not been restored. 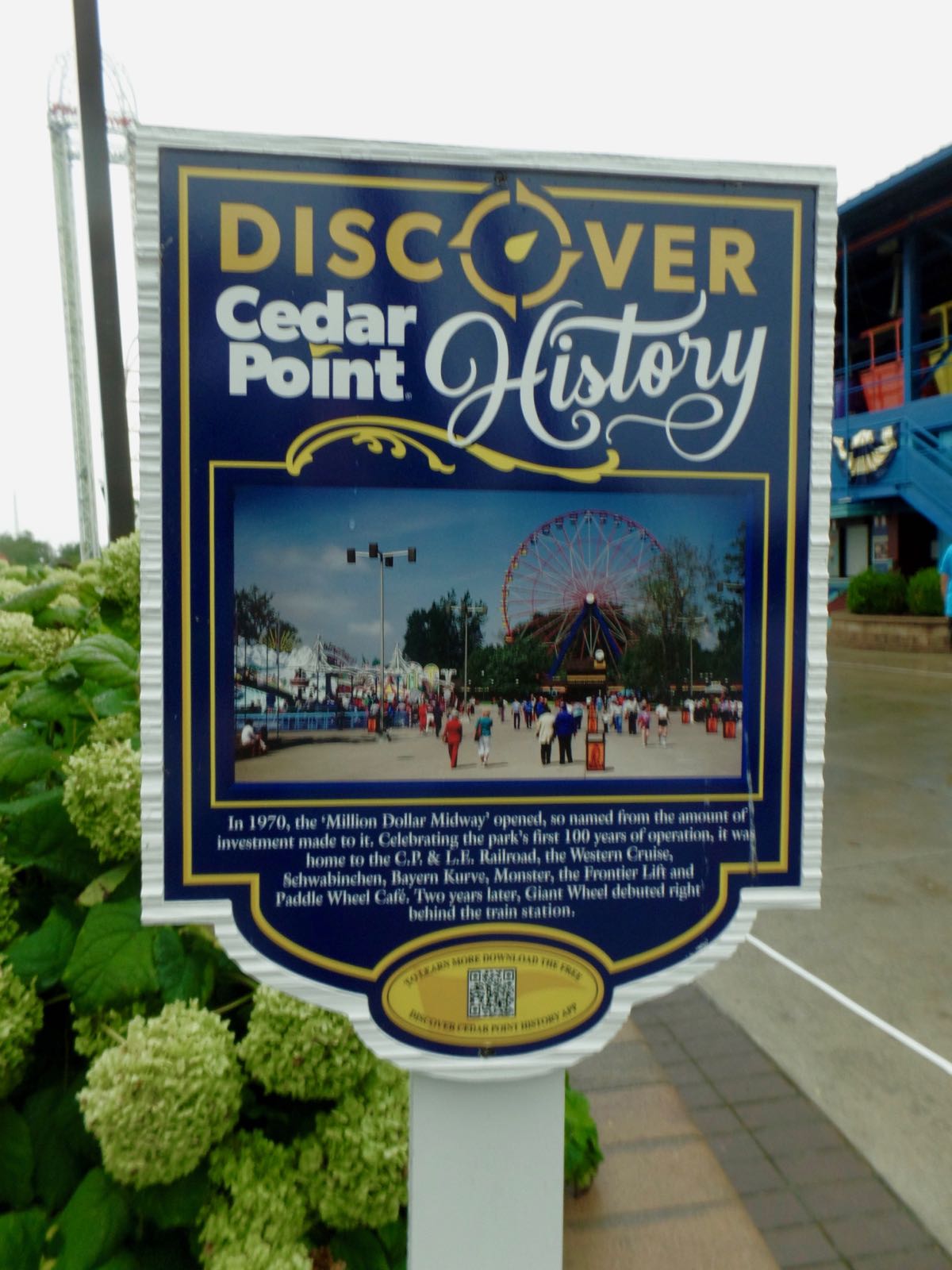 Historical plaque taling about the opening of the Million Dollar Midway in 1970, celebrating the centennial of the park. Of the rides listed on it only the Railroad and Monster are still in operation. (The Giant Wheel debuted two years later, behind the railroad station and nowhere near its current location.) 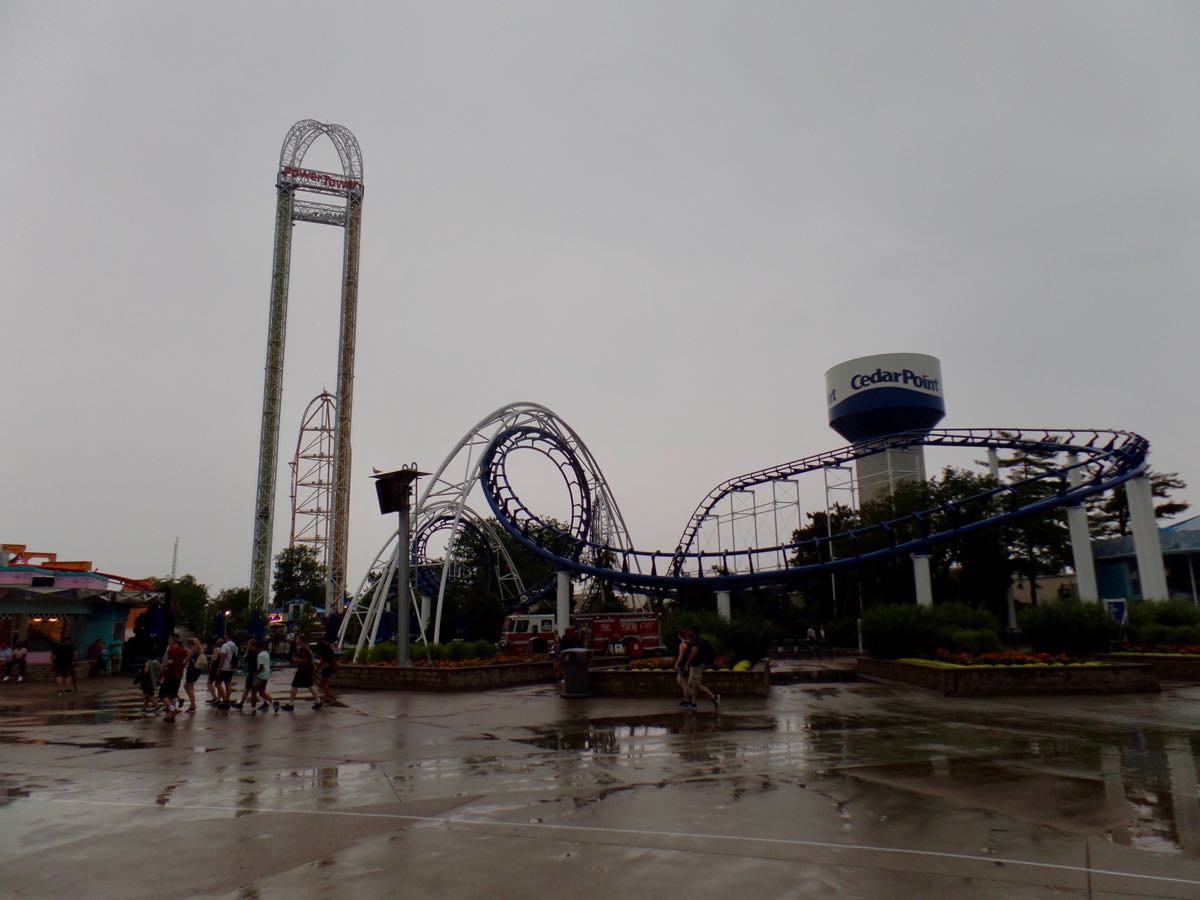 Corkscrew and, behind it, the Power Tower and Top Thrill Dragster, looking sopping wet. 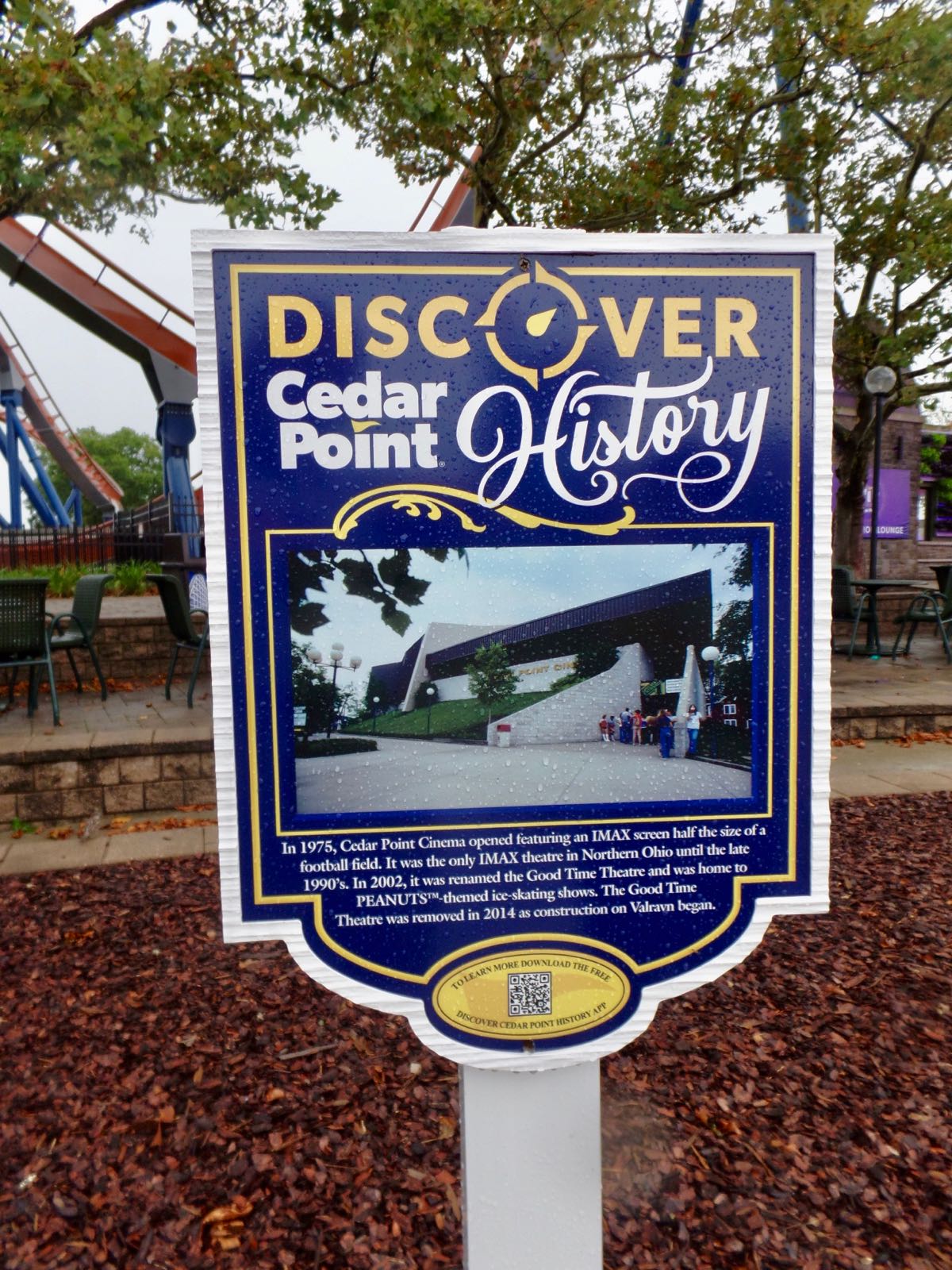 A historical plaque commemorating the Good Time Theater, the former Imax theater, which I remember visiting its last season! We saw the Peanuts shows there, and our first Midnight Syndicate show. Hey, no fair putting stuff I remember on historical plaques; that's just cheating.

Trivia: Spending on the National Road during Andrew Jackson's administration was roughly double that of any of his predecessors, in part because it served many areas of the Upper South. Source: Waking Giant: America in the Age of Jackson, David S Reynolds.