I'm skipping the story of how I got two cars home with one driver because I don't have the time to write it. Instead, please consider my mathematics blog for the past couple weeks, which has included posts like this. You could get all this on your favorite RSS reader, if your Friends/Reading page isn't already that. (And if you're on Dreamwidth or Livejournal, you can just add any RSS feed to your Friends/Reading page. It's easy!)

And that all said, please here enjoy some Cedar Point trip pictures, from the moments even closer to the death of my car. 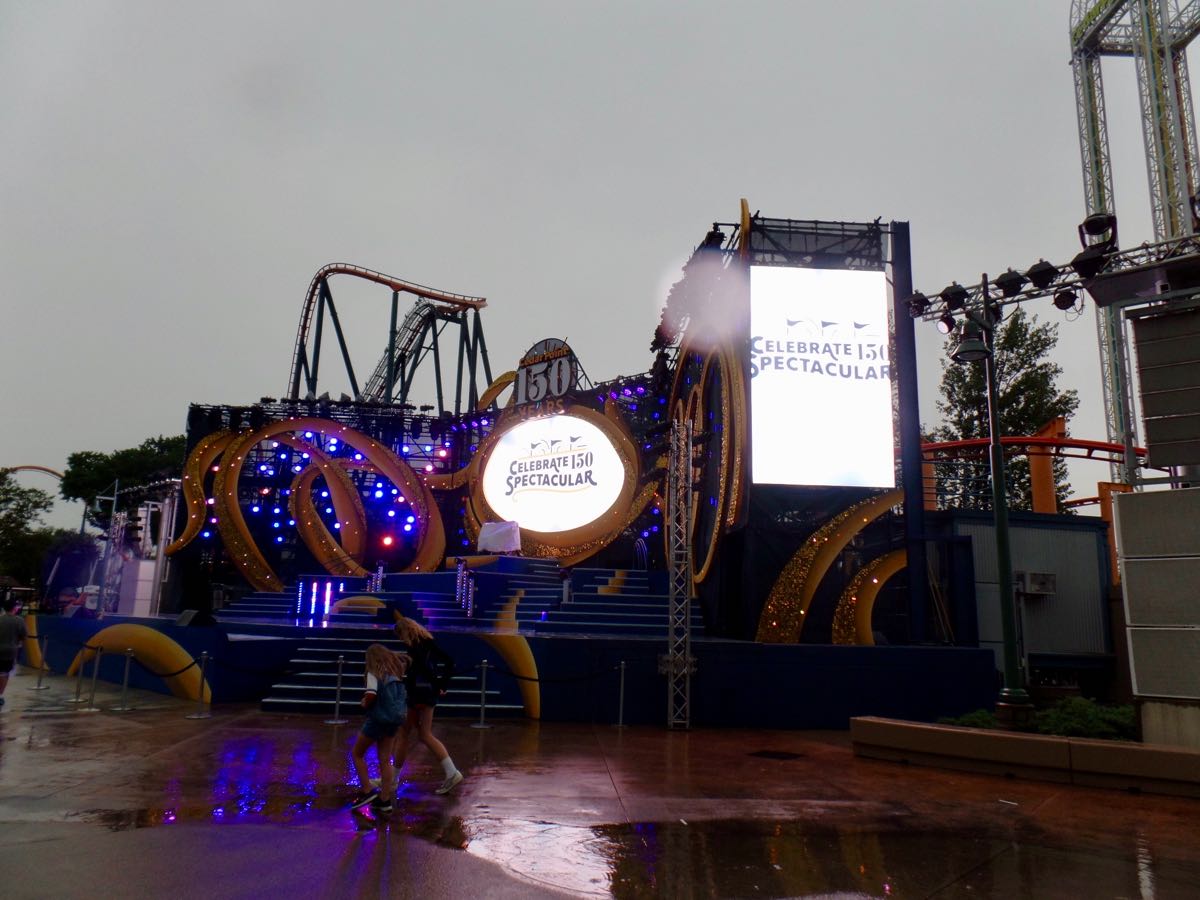 The stage where the Celebrate 150 Years Spectacular was supposed to be held, after the parade, if that were to happen. You can see just how wet it was even with the rain having receded. There were people squeegeeing the stage and we were wondering what if any performances would actually be held. This, by the way, was like 5 pm, almost four hours before sunset. 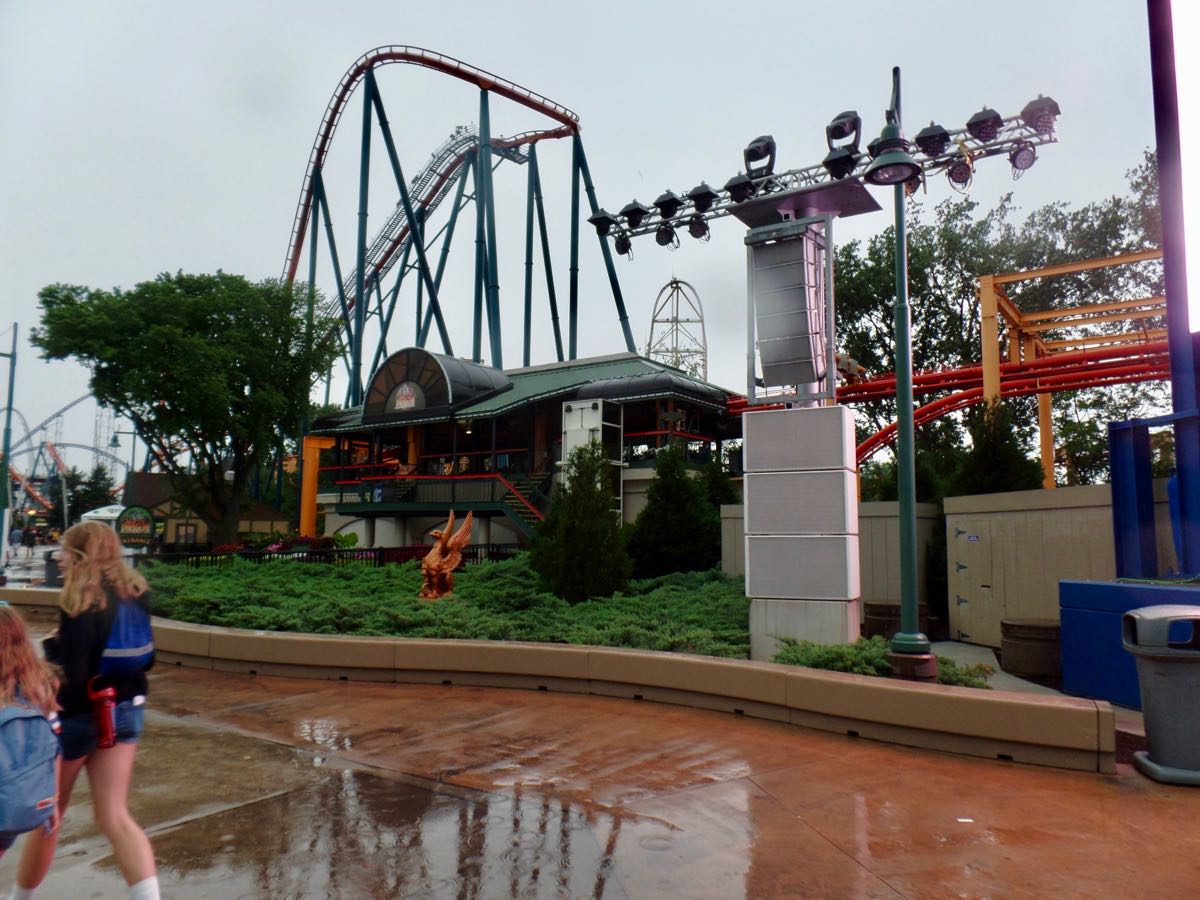 Iron Dragon, not yet to the point of doing test runs. But at least the gryphon's there and looking good! 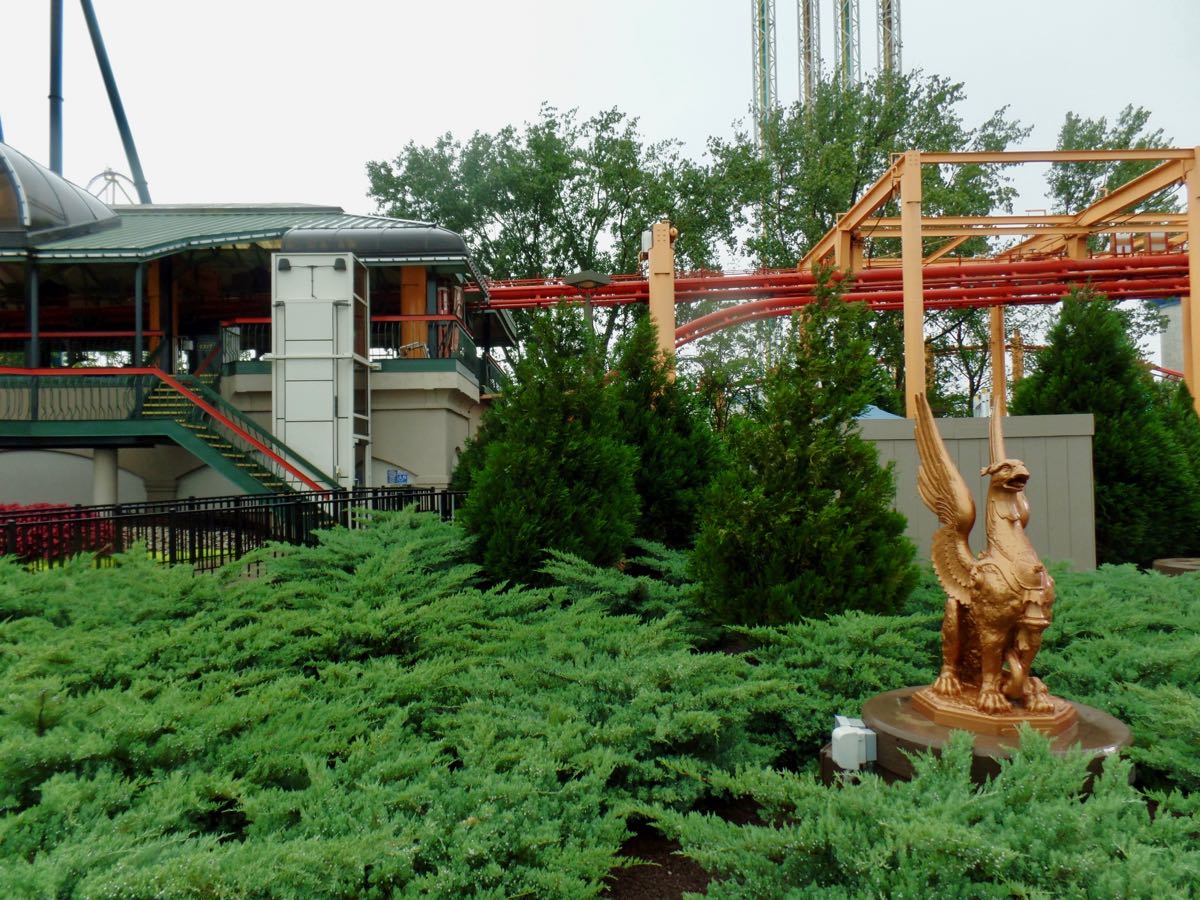 Another look at Iron Dragon's station, with the gryphon guarding it. 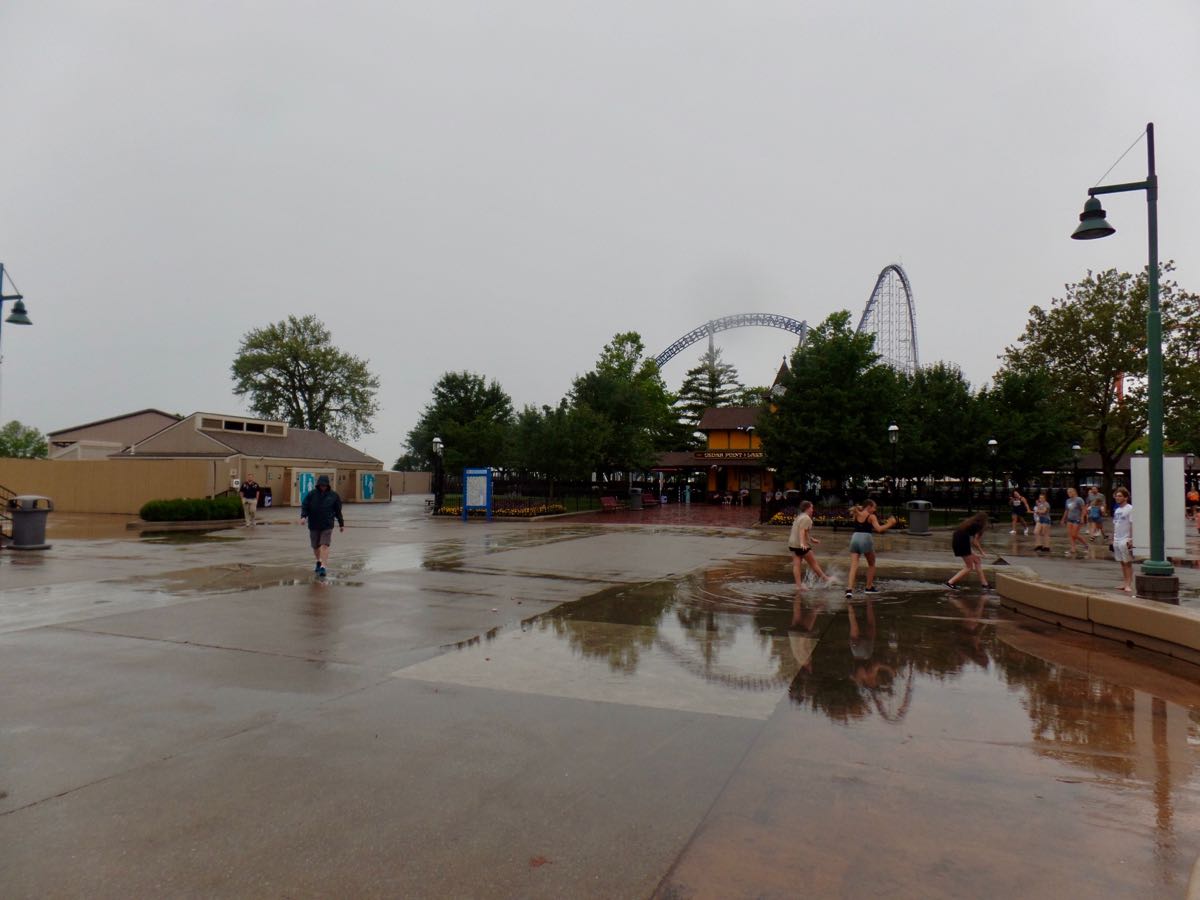 People kicking around in the great puddles in the park. We'd worn sandals, partly because it was supposed to be a warm day, partly because we knew if it rained we'd rather those dry out than try to wear shoes which had been through this. 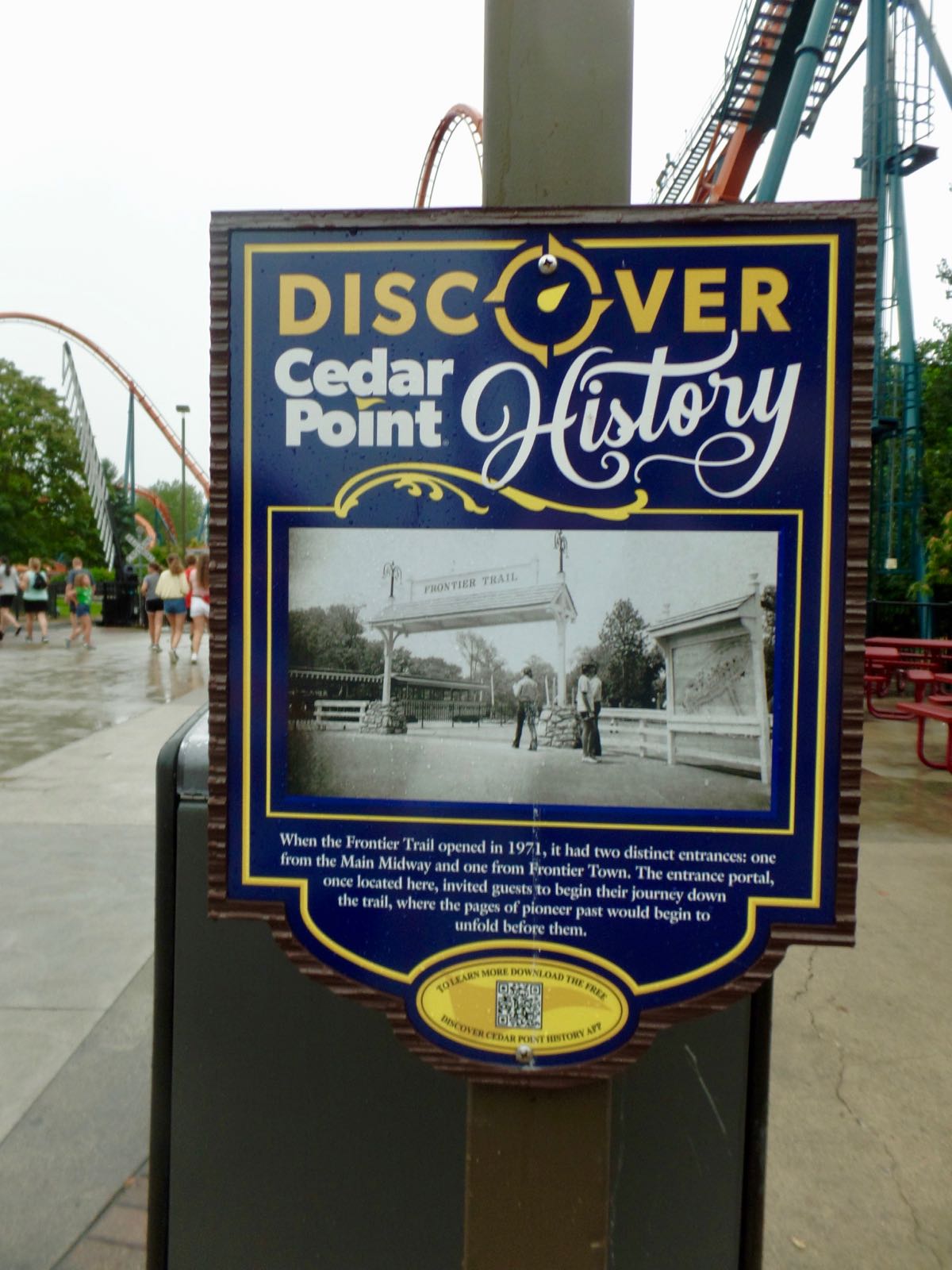 Historical marker showing the original Frontier Trail, which a half-century ago brought a dose of Historically Informed Old-Timeyness to the park. The trail's been contracted, by Cedar Point's desperate need for space to build things like beloved coaster Millennium Force or acknowledged-to-be-present coaster Rougarou, although the recent concentration on building up the Frontier Town area might protect and revitalize what's left of the trail. 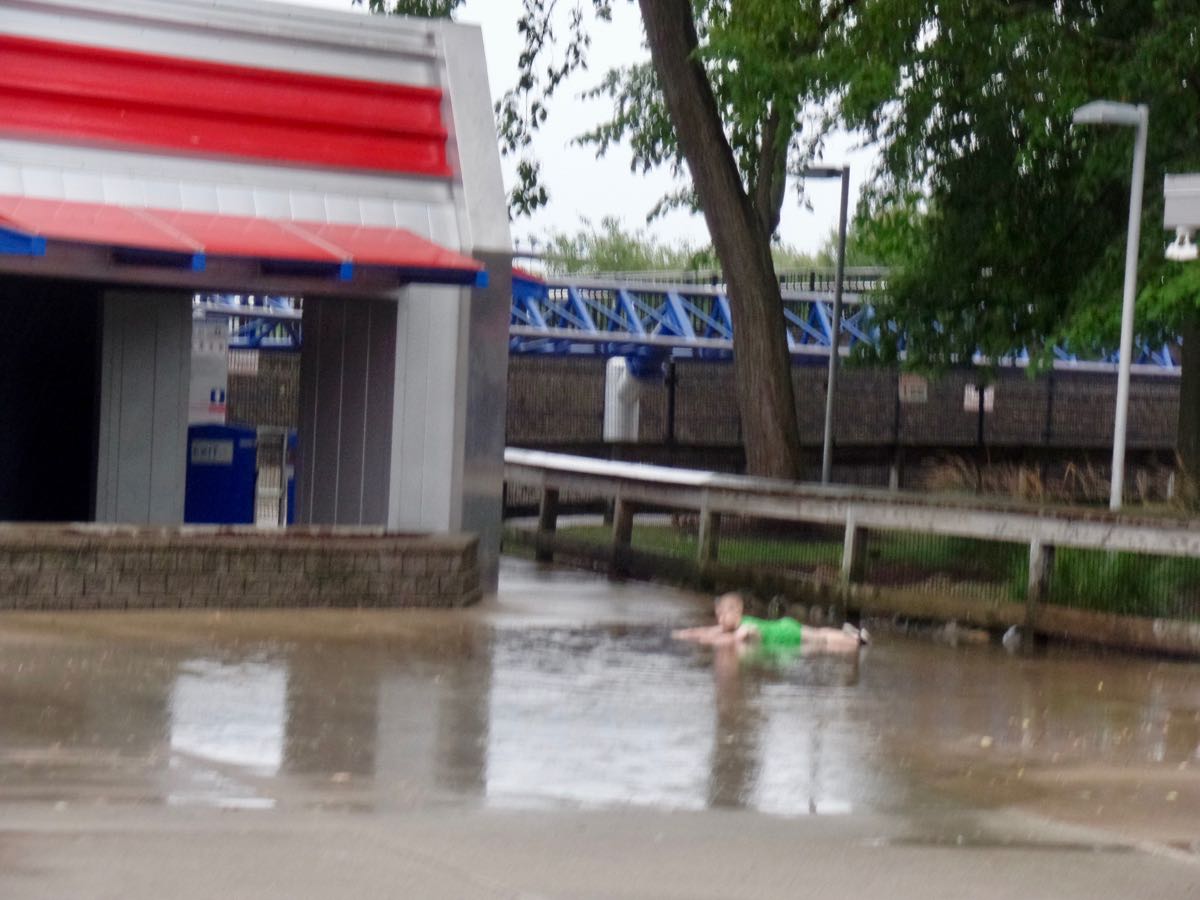 Kid who's decided since he can't ride Millennium Force he's just going to get down in the puddles and swim there. We could not imagine doing such a thing and then another kid came and splashed around with him. Kids: them and their deal, huh? Right?

Trivia: Red Sox pitcher Howard Ehmke's 7 September 1923 no-hitter against the Philadelphia A's was saved when A's hitter Slim Harriss failed to touch first on what was otherwise a double. Four days later Ehmke lost a no-hitter -- and the chance to be the first pitcher to throw consecutive no-hitters -- when the scorer ruled third baseman Howard Shank's misplaying of a ground ball counted as a single. Source: The Rules of Baseball: An Anecdotal Look at the Rules of Baseball and How They Came To Be, David Nemec.