It's really no big mystery how I got two cars home with one driver. I went home, got

bunny_hugger, and drove back to Battle Creek. But that dry fact shares none of the adventure.

In an abundance of caution I made sure the dealership wouldn't mind if I left the car until I could get my wife. Of course not. So, with a last can of pop from their fridge, I drove homeward, slowed down by a lot of construction zones. Ended up figuring I didn't have time to stop home for even a short rest, not with stopping to fill her tank back up. (Figured it was the bare minimum I could do.) Besides getting her from work, we had to drop her car off at Best Buy, to have her after-market stereo replaced with the factory stereo, the one that won't synch with MP3 players or anything. It's the last car chore she figures to do before trading it in on a new vehicle. I picked last years' Sparks album (A Steady Drip Drip Drip) as the last thing to play on the stereo.

Got there in good time to pick her up from work, and we went over to a different part of the mall complex for Best Buy. They were able to be replace the stereo in about the time I needed to describe my car-buying experience and promise that she'd love how cute my new car is. And for her to share what a close call she had this morning, not having as much time as she really needed to feed our rabbit and feed herself and get the bus when the bus driver didn't notice her at the stop. (The bus screeched to a halt before it got another block away, and the driver apologized.) We were both hungry, so got some burritos from Taco Bell, my first time getting that particular fast food in a year and a half.

What we did not do was go straight for the dealer. This was because I mentioned having seen Horrock's Battle Creek. This is the second/other store of the hipster farmer's market where we get most of our groceries from. We'd known it was there forever --- it's printed on their bags and stuff --- but never had cause to be there. Now, though? Why not take the chance to see what it's like? (There is another Horrock's yet, in Grand Rapids, but the other two stores don't talk about it, and they don't, like, share a web site or gift cards or anything. The crack seems to be the Grand Rapids store has a co-owner that's not in the family that Battle Creek and Lansing enjoy? We don't understand it, anyway.)

The Battle Creek Horrock's is a smaller space, what looks like a former downtown department store refurbished. It's also more coherently organized than the Lansing one, which was several buildings expanded and fused together in amoebic growth over sixty years. Despite this, we needed three attempts to find the door. The interior seems more coherently laid out, likely again a reflection that the floor plan is not a bad Tetris board. The selection seemed better, although that might just be the delight of the unfamiliar. But, like, they had swiss-almond cheese spread, which our Horrock's has not had in a year. It also had complementary coffee (and tea), something our Horrock's suspended at the start of the pandemic and hasn't resumed. Mostly. Battle Creek Horrock's warns that the complementary coffee is free only for paying customers; for anyone else, it incurs a 99-cent charge, thereby entailing a paradox. The difference is very likely that there's some good lounging areas right outside the door. If there weren't a charge people might just use the place as a bookstore cafe and not even pay for coffee.

We did buy some stuff --- the cheese spread, particularly, and some candies we don't see much at the Lansing Horrock's --- and took pictures and bade farewell and all that. We'll have to stop in when we go past, for pinball events in Kalamazoo, now that we know how easy it is to find.

From there it was straightforward. A couple turns and we were at the dealership. I took a few pictures of our two red cars together and

bunny_hugger agreed, it's a cute one. I checked that she had our satellite navigator (we only had the one working one), so she could get home safely. I knew how to get back to I-94 already --- I'd been on that path two times already that day --- so didn't need the help. I did need a bit of time starting out, to discover the USB cable for my iPod didn't really want to make a steady connection. Most any way I moved the iPod broke the connection to the car, an indication that either the cable or the iPod has some dirt on the connector. (Plugging in a different cable, as I did Monday and today, suggests the cable was at fault.) This was the one right from my old car, though, which may explain why it seemed sometimes the iPod wasn't charging. I had thought it was the cigarette-lighter-to-USB adaptor coming loose. My new car has a built-in Bluetooth scheme too, so I might set that up for the iPod; it's very easy when we can be more casual about plugging stuff in.

The time spent fussing around, finding a position where I could listen to the rest of that Sparks album, meant

bunny_hugger got home a good bit ahead of me. Finally the both of us were home pretty close to sunset, after I'd spent the whole day in car-buying related stuff. That was all very exhausting.

bunny_hugger noted, it was the happiest she'd seen me since I crashed the Scion. And, yeah, having this worked out did, and does, feel pretty good.

So let's have some pictures, which it turns out were nearly all of the exterior of Horrock's. I must have failed to find a good vantage point for an interior picture. 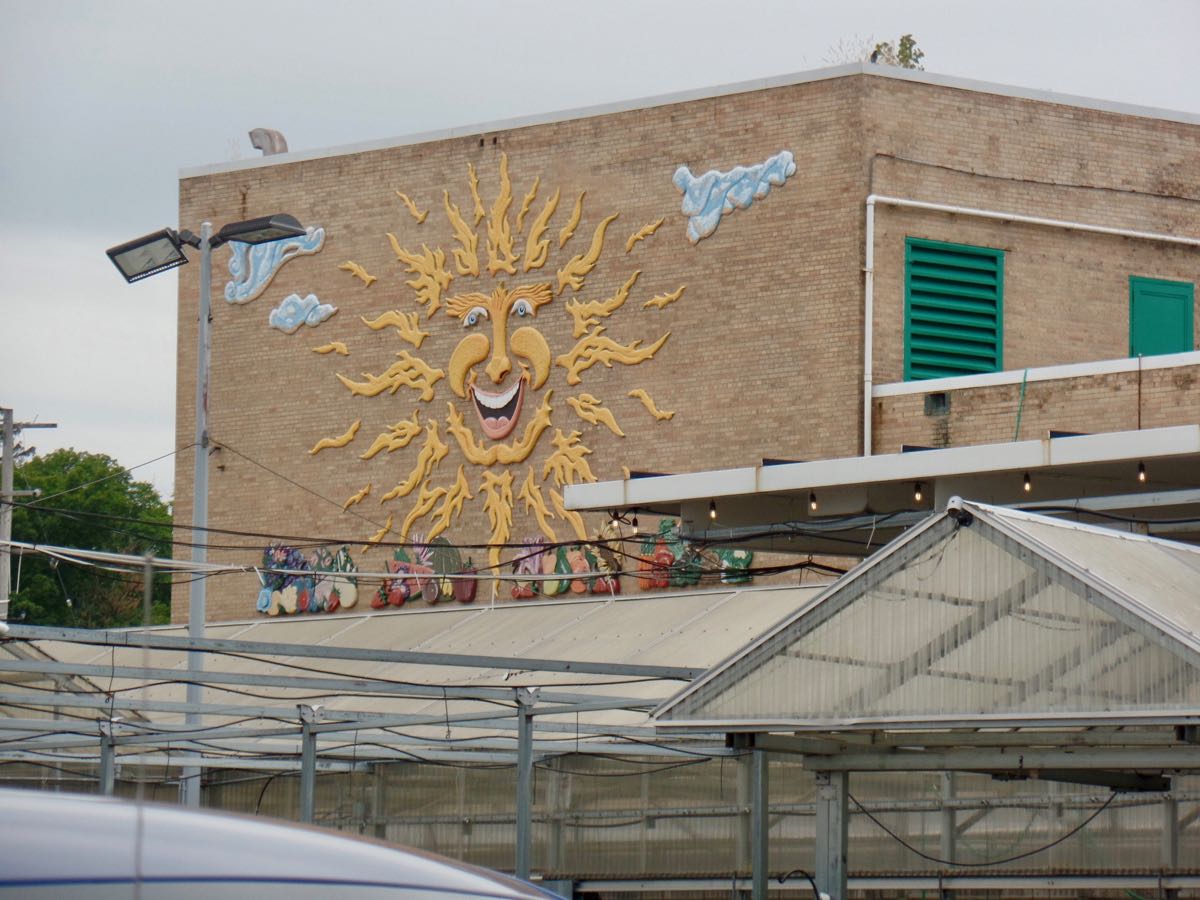 Smiley sun face figure that's posed out over the edge of the building, making sure that as you examine the garden area you feel watched. 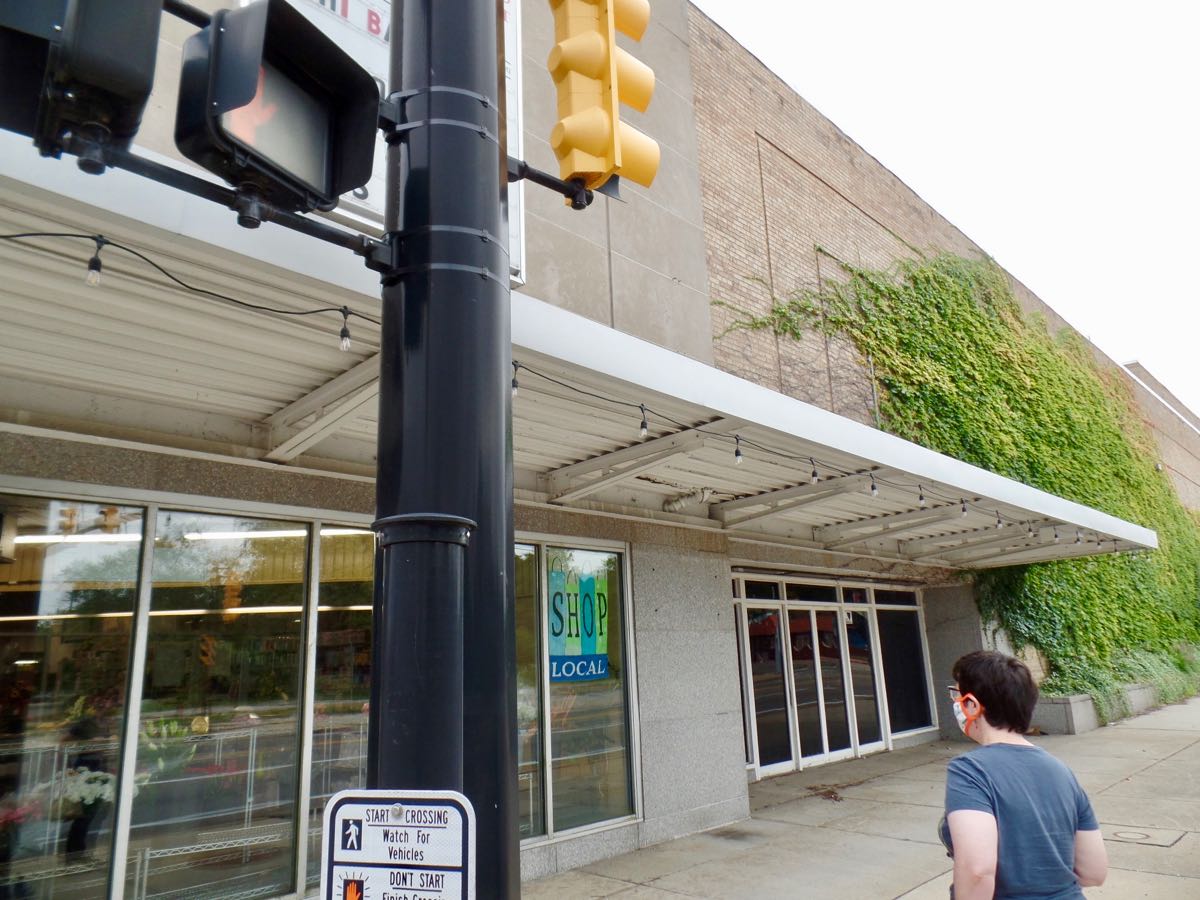 Doesn't this look like there should be an entrance? Somewhere around here? No, it's just an illusion. 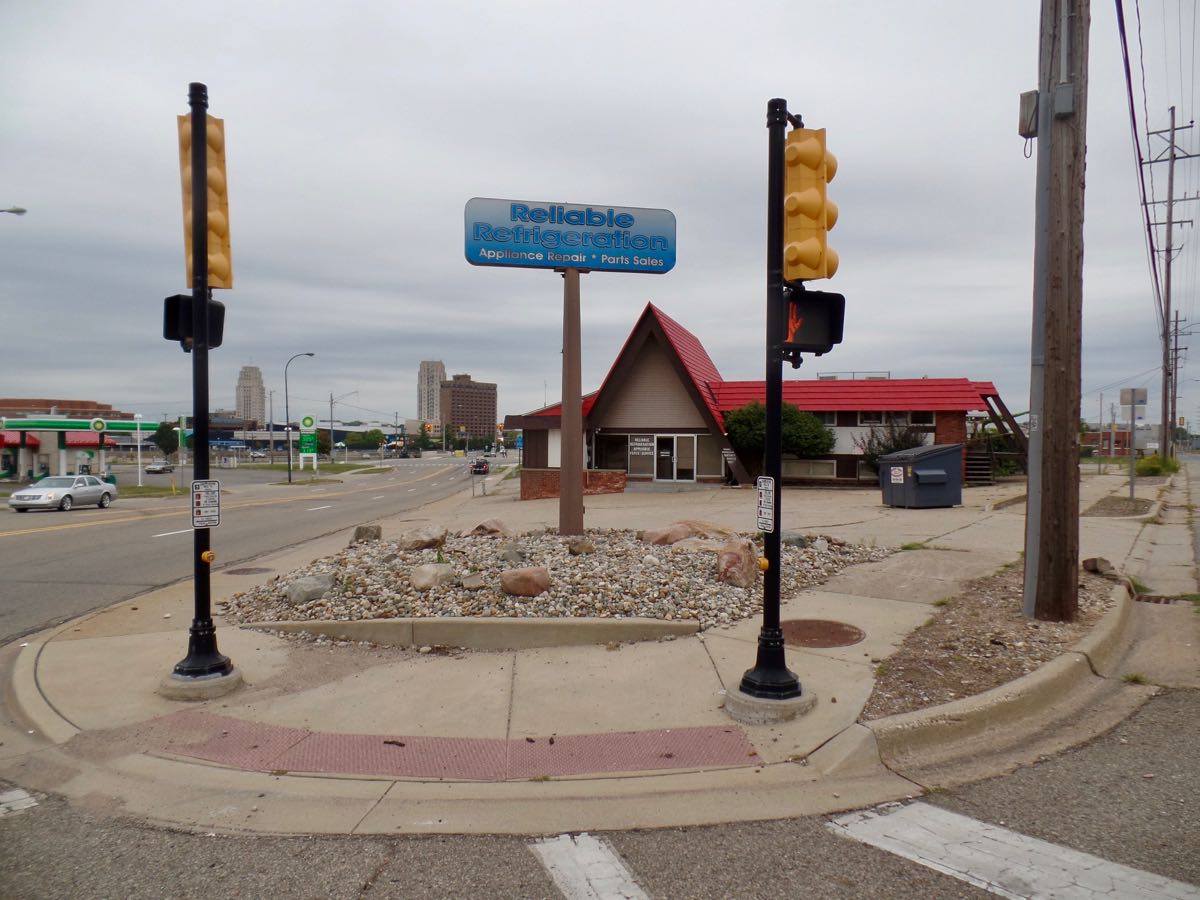 Oh, and across the street's this refrigeration place that clearly used to be a pancake restaurant. Just observing. 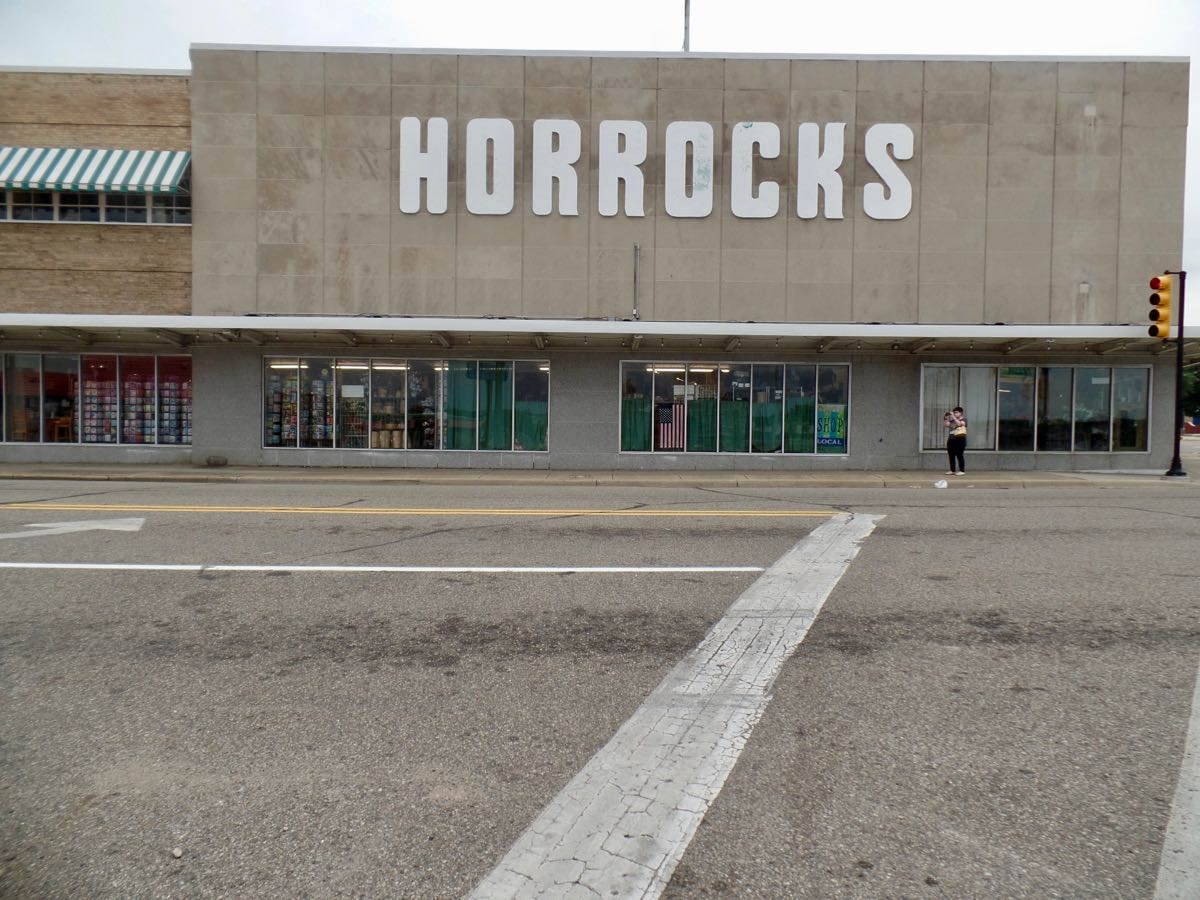 Admiring the logo here. This particular store dates to the early 90s so I don't know why they have such very 70s design touches as this sign and the smiley face around back (where the doors are) 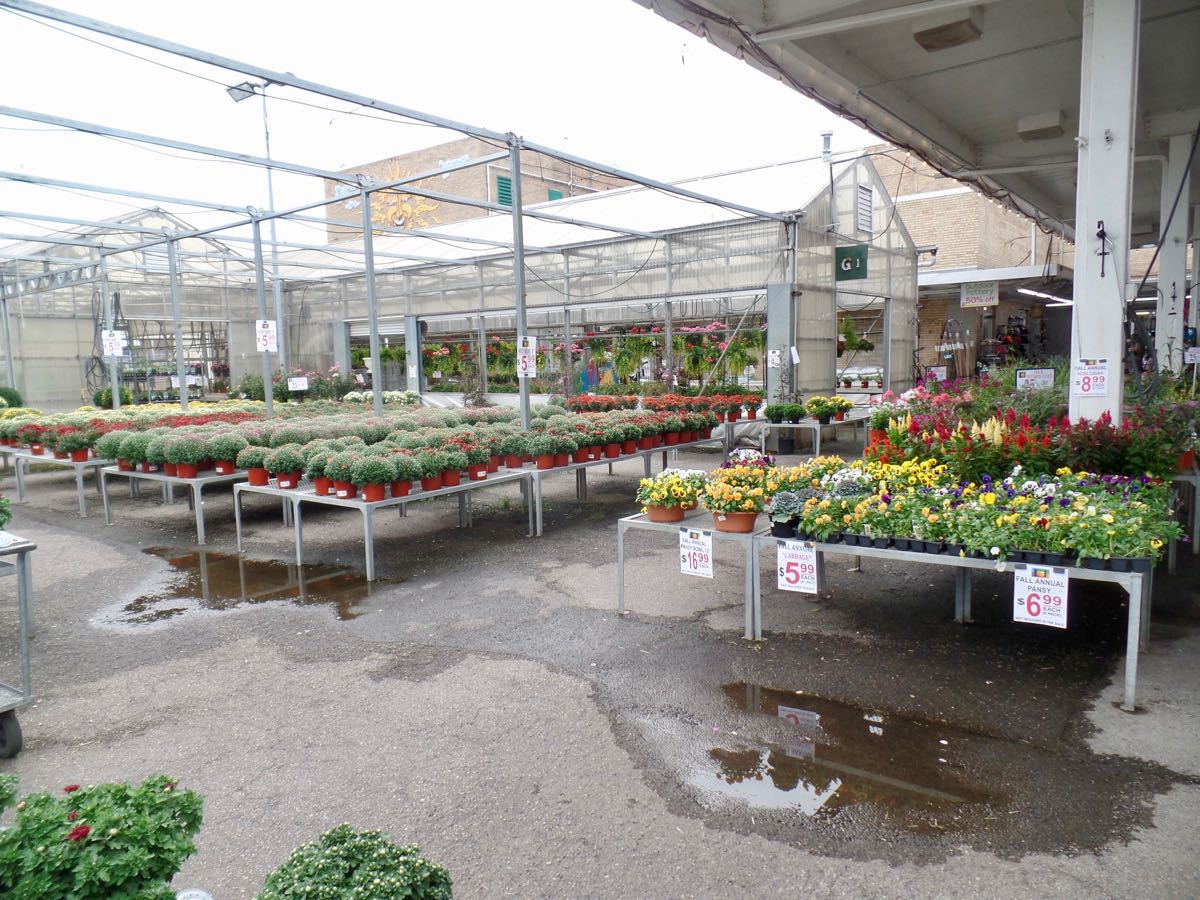 The garden center, in case you need some pansies (which

bunny_hugger was considering). Observe the smiley sun watching over you. 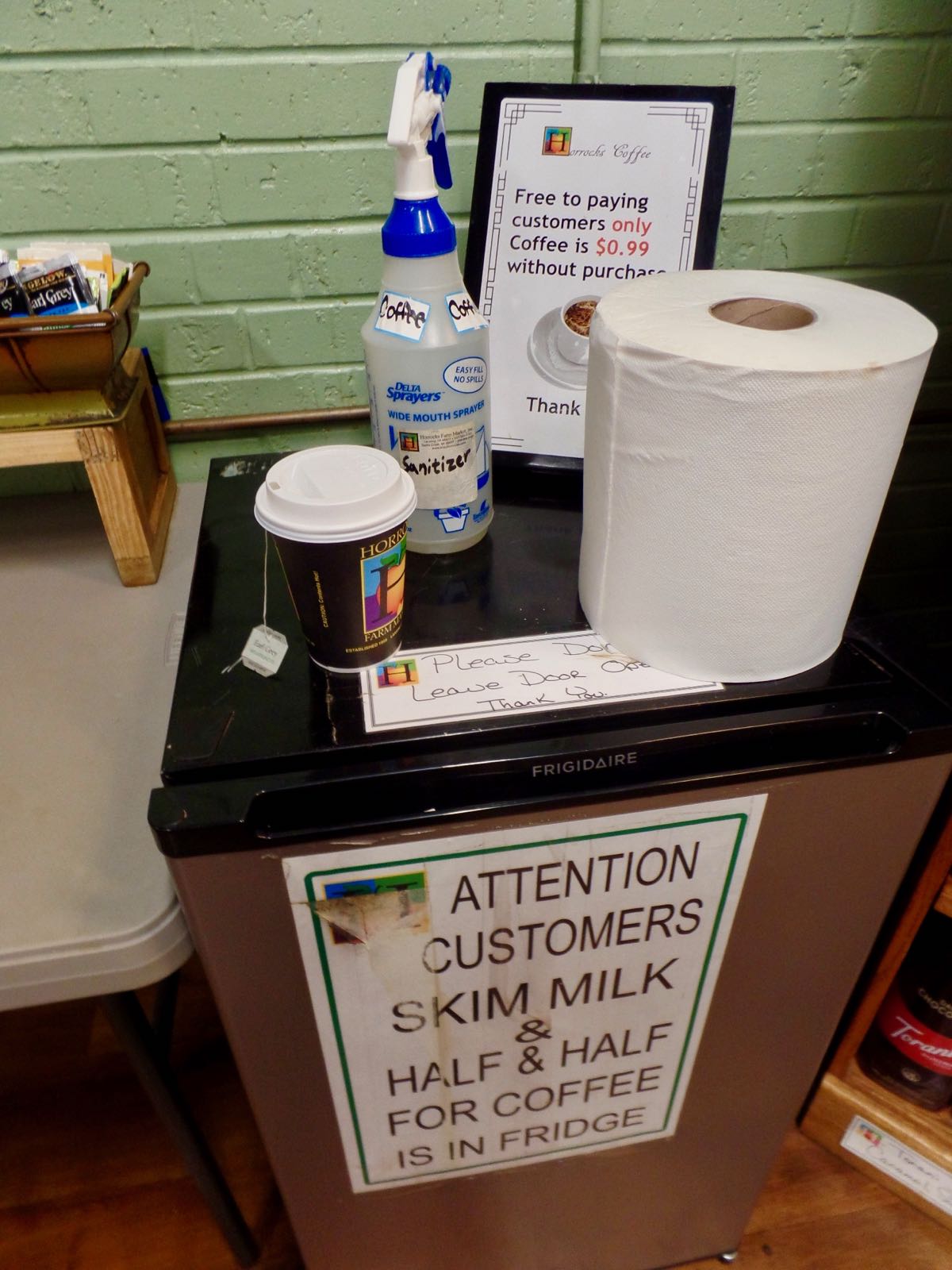 The Lansing Horrocks coffee bar (when it's open) has a full-time attendant making sure that the milk and the half-and-half and all are kept cool and tidy; Battle Creek's keeps it in the fridge instead.

Trivia: France's occupation force in Germany shrank from 100,000 to 60,000 by 1927, and was entirely withdrawn by 1930. (They needed the troops for colonies.) Source: The Vulnerability of Empire, Charles A Kupchan.