The lock on our side door, the one we use all the time, jammed earlier this week. It's gotten a bit stuck before but we'd been able to un-stick it by shoving the key in harder. No luck this time; it looked like some of the tumblers had gotten trapped out of position.

Going in and out through the front door was got old in less time than it took to say this about how fast it got old. The locksmith

bunny_hugger called last time she needed the locks changed has gone out of business, sad to say. So has this locksmith we noticed a few years ago, that had been in business for a century-plus. They'd started as a blacksmith shop even. But they moved out of their longtime downtown location a couple years ago, and are out of business now, so, phoo. Ended up going with someone that had good reviews on Yelp. Wednesday, they said they'd call Thursday to say when they'd be able to be out. I realized after that I didn't know when they'd call Thursday, so I got up as early as I could bear for it, and they ended up not calling before the afternoon anyway.

And they wanted to come out Friday at 9 am, and I accepted that rather than hope they could get out at a decent hour like 1 pm. I got up early on Friday so I could let the locksmith in, raising the question: why? But the guy got here on time, and spent not long fussing with the side door. I wasn't hovering around, so I don't know just what he did, but it sounded like he was spraying WD-40 in, something we could have tried if we'd thought it not hopeless. He also did something that required a power screwdriver, though.

And it's very well-repaired, too. The lock tumbles effortlessly, with a smoothness I didn't know a basic door lock like ours could have. It's left me regretting I don't have more reasons to leave the house these days, just to lock it up well.

Here's a good look at Wicked Twister from our final ride on it. 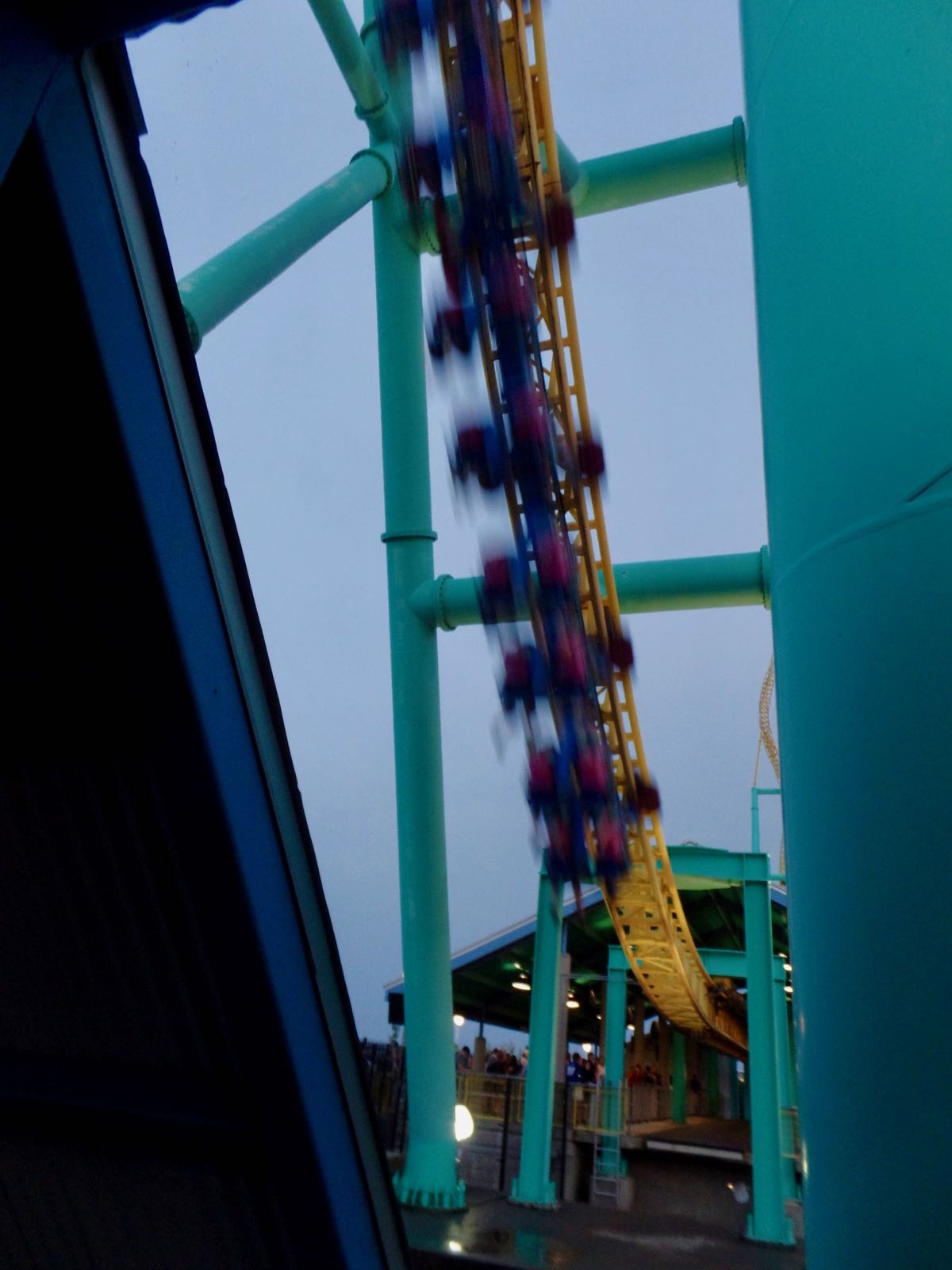 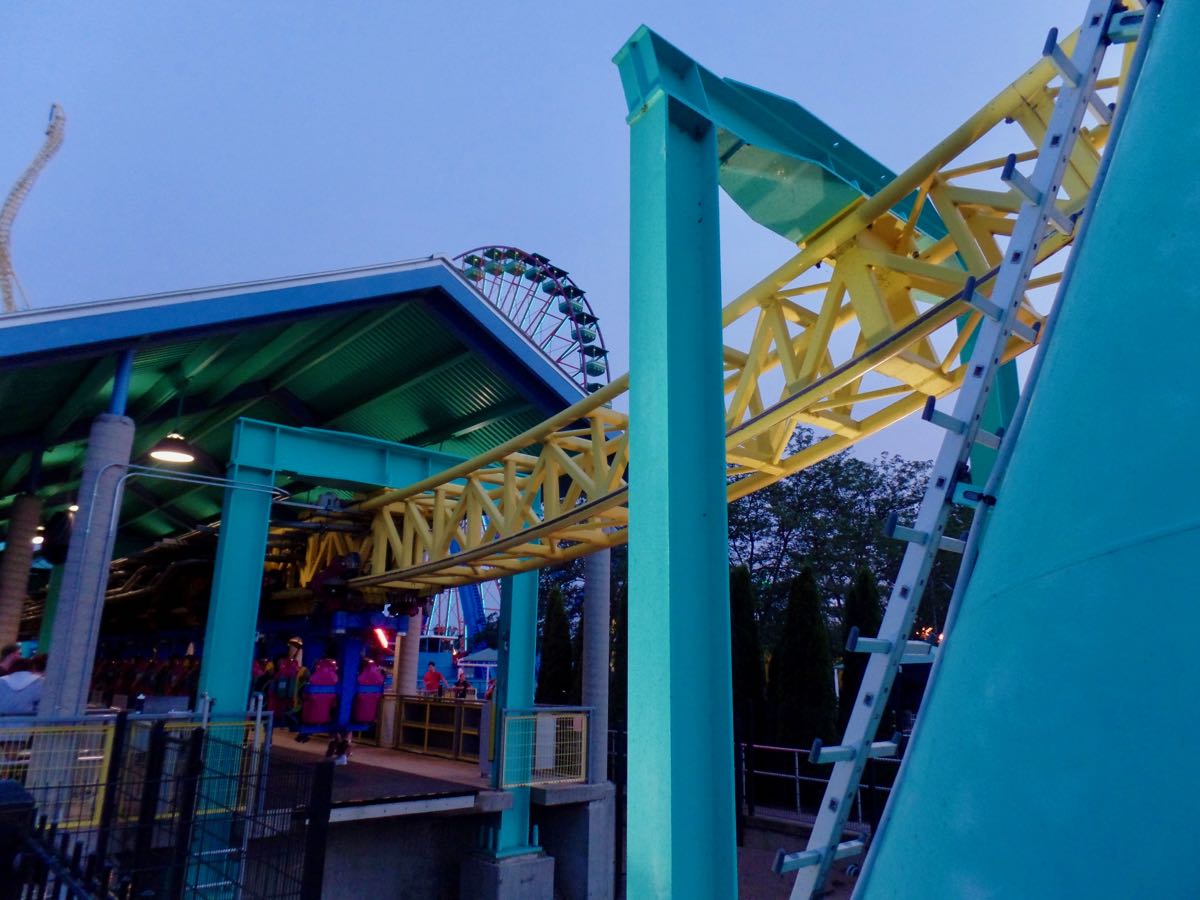 A nice look at the back end of Wicked Twister's launch station, seen in the evening light. 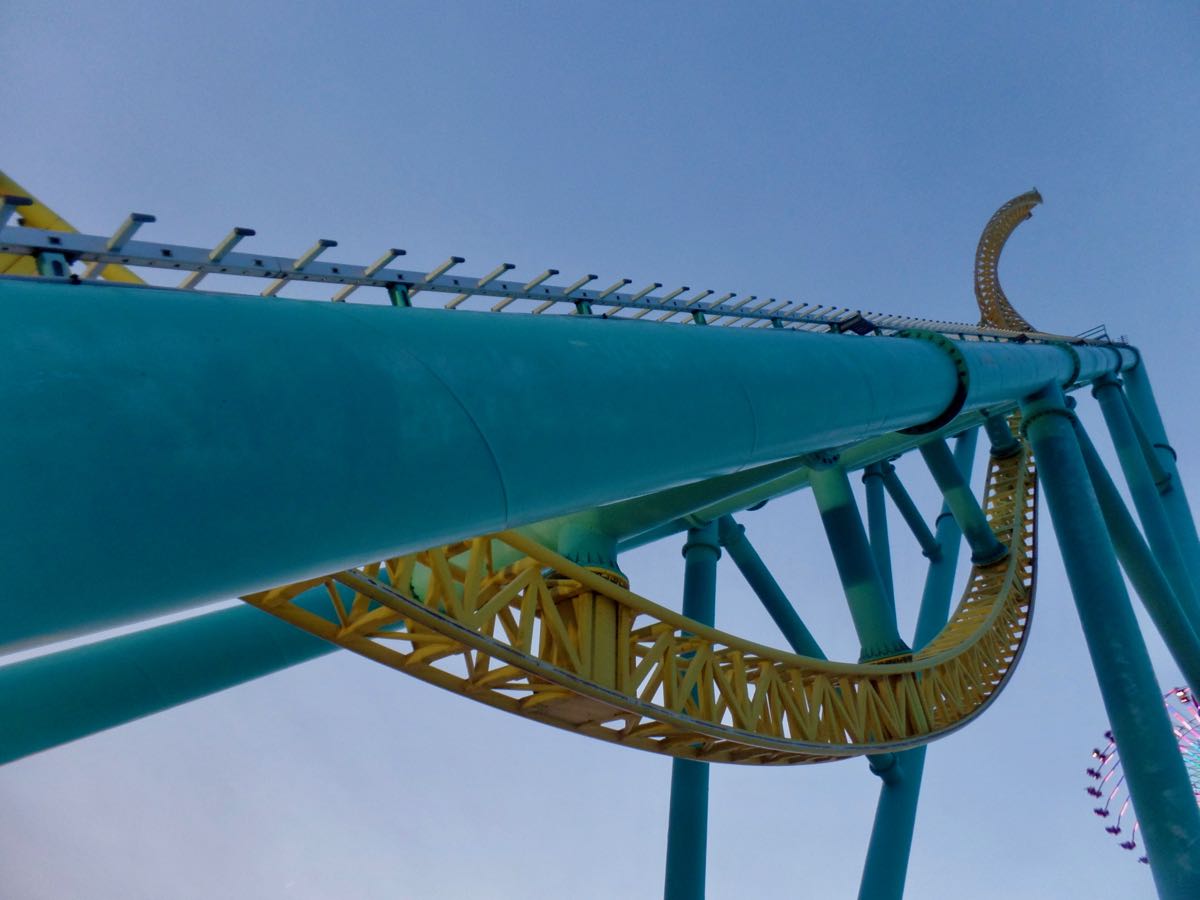 Looking up the backwards tower for Wicked Twister. 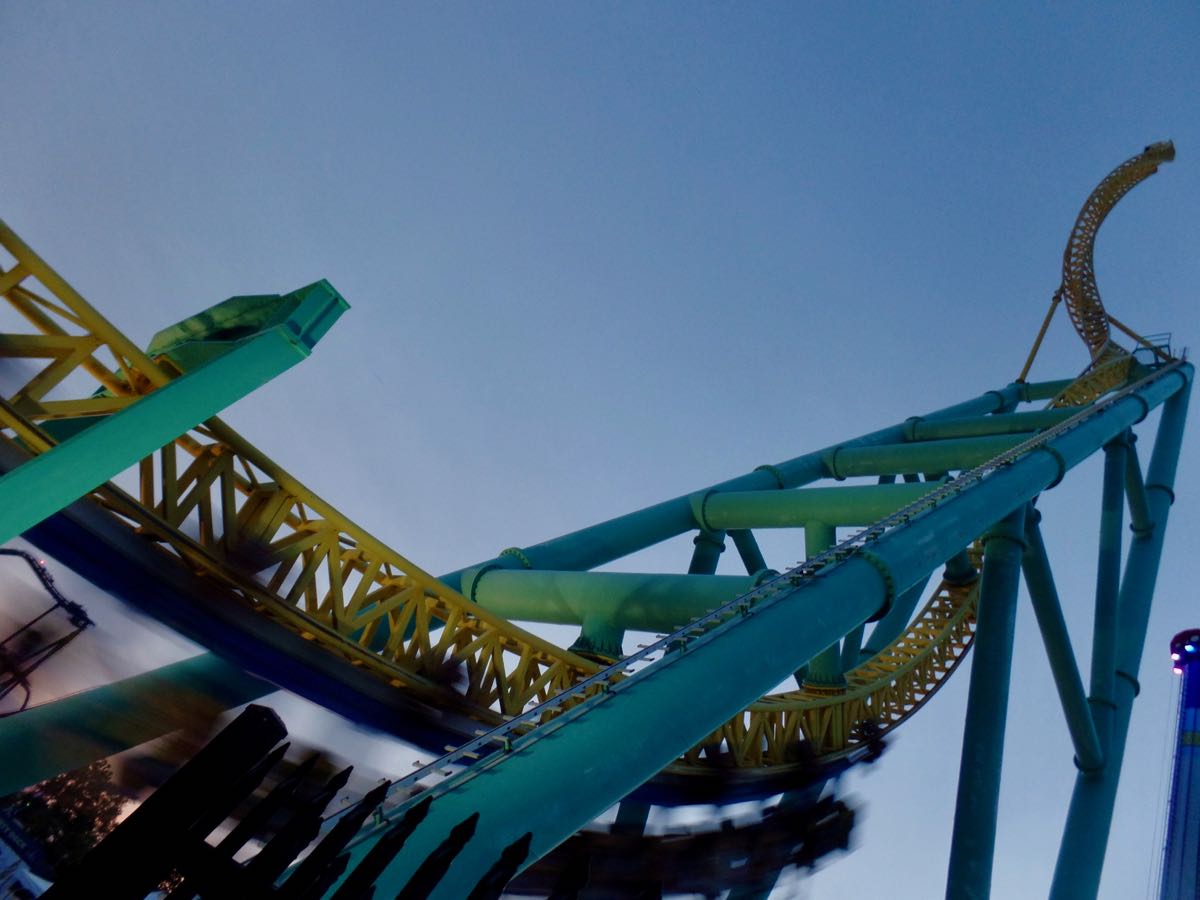 And the train going up the backwards tower. 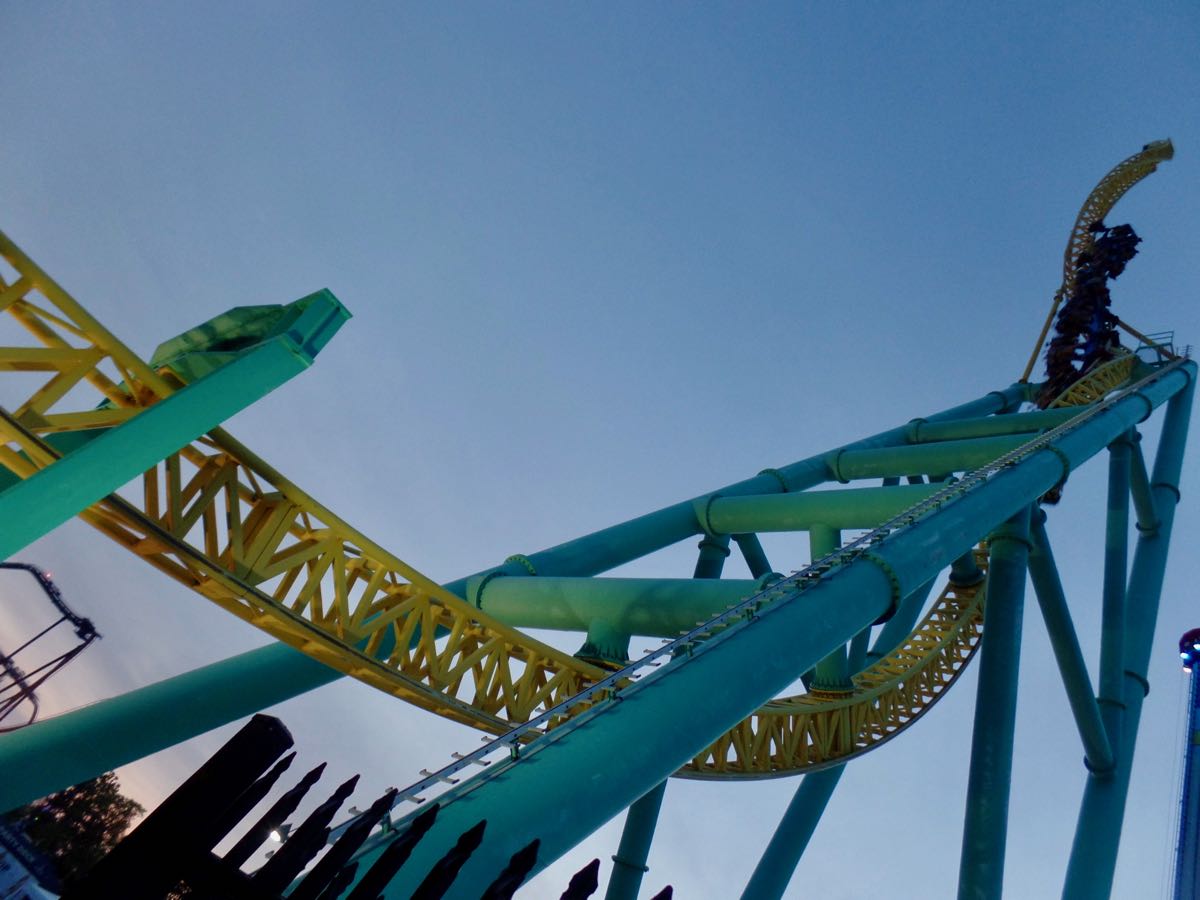 And here the train's near its greatest ascent on the backwards tower. Although when riding it looks like the train gets almost to the end of the track there's a good bit of height left. 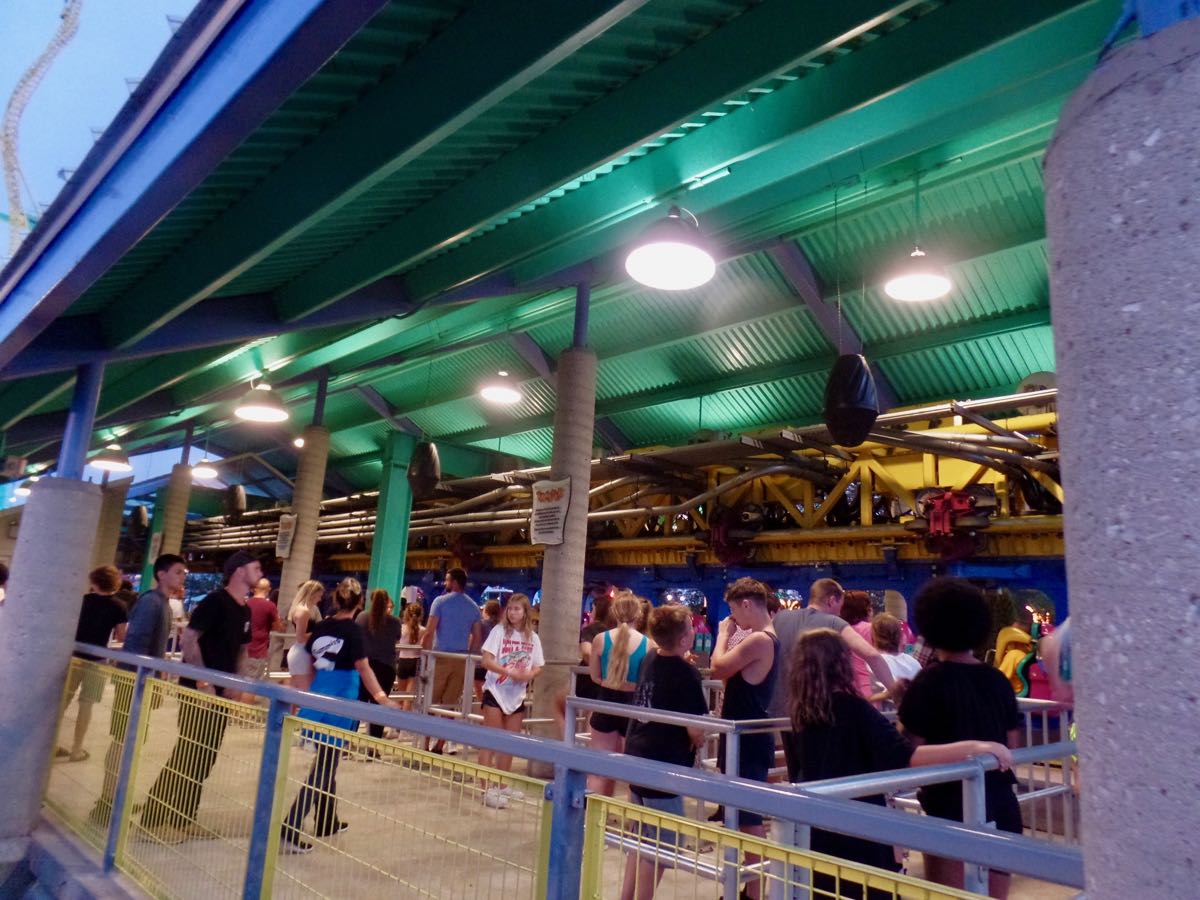 And a look at the station as the train empties and reloads.

Trivia: Animator (and voice actor) Bill Scott was paid $150 for the storyboards he illustrated with Jay Ward for the Rocky the Flying Squirrel pilot, in 1957. Another $150 was to be paid if the pilot were picked up. Source: The Moose That Roared: THe Story of Jay Ward, Bill Scott, a Flying Squirrel, and a Talking Moose, Keith Scott.