You may have inferred the day at Michigan's Adventure was a pretty good one. We spent more time looking for food than would have been ideal, but otherwise? The stuff we wanted to ride, besides Mad Mouse, was all short lines and fast running. We were able to walk on to Thunderhawk and Corkscrew and Woodstock Express. The carousel. Wolverine Wildcat had a short wait but nothing big. In all, very close to what

bunny_hugger thinks of as the way the park should be, uncrowded and easy.

The other exception was Shivering Timbers. It's their biggest and longest roller coaster, their mile-long wood coaster. It's normally able to handle lines well, but after the collision a couple months ago they've been running only one train at a time. This was another ride with estimated wait time signs, and we wondered if they were positioned for how the ride runs with two trains, or if they're positioned for just the one. The sign suggested it was a 15-minute wait and that looked plausible for two-train operations. Still, we hadn't ridden it yet this day, so we should.

The wait ended up closer to 30 minutes, like we had reasonably guessed. We did overhear someone talking about being 'on line' for the ride, a tipoff for someone being there from the Northeast. It suggested someone on a roller coaster trip. The person who said it had a Brooklyn Nets cap on, suggestive, but wasn't wearing a coaster t-shirt so he might have just been a person rather than a roller coaster fan.

And then, when we were two trains away from riding ... things shut down. One of the seats needed cleaning, as had hit us the previous visit, on Wolverine Wildcat. And, as before, it was something that for some reason they needed to call security in for, lest ... what? The wet-wipes not be under control? This added a 15-minute wait to the ride.

And while we were waiting ... well, something happened that hasn't ever hit me before. We were just short of being shaded from the sunlight, beating down on my back, my neck, my skin ... it wasn't a very hot day, but it was warm, and we hadn't had anything to drink before getting on line. And I was sweating. And sweating more. I realized I wasn't just thirsty, I wasn't just feeling tired, I was feeling dizzy. I looked at the water cooler behind the ride operator's booth, and wondered if I could get a cup of water. Or if that would be enough.

bunny_hugger and told her I was feeling dizzy. And on the brink of a ride I'd waited 45 minutes for, I tapped out, walking across the cars and telling the gate attendant that I felt dizzy. He advised I sit in the shade a while, which was good advice. I don't know why he didn't offer me water but there's no way I could have drunk enough before the coaster would dispatch. It's the first time in my memory that I skipped a ride at that point and certainly the first time I ever did that for health reasons.

bunny_hugger rode --- I told her she should, and she asked to make sure --- I went to the nearest bathroom (none too near) and rinsed my face. Then went to the water fountain beside and drank a lot of water, which did, in time, get me feeling better. More steady at least. When I felt like I could walk without dizziness I started back toward the Wolverine Wildcat Grill, where I had tried to choke out to

bunny_hugger I'd meet her and was not at all sure she'd heard. But I also figured she would conclude I'd have gone to the water fountains and then returned to the Grill, the nearest place to get a pop. So she did and we met up again.

It was now around 5:00, one hour left in the season, and the line for Shivering Timbers had gotten longer. I decided I'd rather do other things than wait through all that again. And so we did. We'd check the gift shops to see if they had any good park merchandise. They didn't, although they had some weird Peanuts-themed merchandise, including a mid-50s-style Snoopy wearing a raccoon cap for some reason. Then, after another pop (I won't get fooled again) we joined the line for Mad Mouse, promising something like a 30 minute wait, and we figured that would be our last ride for the day, and for the season.

So it was. We weren't able to time it so we got the last ride of Mad Mouse for the year, but we were just glad to get a second ride on it at all. Mad Mouse, like the other coasters, felt more intense than we'd remembered, although here we're pretty sure they did avoid a few little trim brakes along the path. Which is the advantage of running only one train at a time, I suppose; they can let the trains that do go out really tear it. It's a bit of consolation but I hope they're back to normal running next year. They won't be.

And this was the too-early end of a too-short season, one when we really should have gone to more parks in June, as it turns out. Here's hoping that we can have a normal summer 2022.

I took a few pictures of my new car at the end of the day. This prompted someone parked nearby to ask if we'd been sideswiped, if someone had hit-and-run our car. (And the car does have a few scratches, which I knew when I bought it, and which takes some stress off keeping it in pristine condition.) ``Oh no, no, it's just the first time we've taken this car here'' and he seemed to understand my exuberant photography.

Though we stopped at the gas station just outside the park, for pop and snacks, we didn't refill the gas tank. This is a car that can handle a day trip to Michigan's Adventure without refilling. The remaining challenge would be whether it could do Cedar Point and back on one tank.

Now let's get started with pictures of this Michigan's Adventure visit. 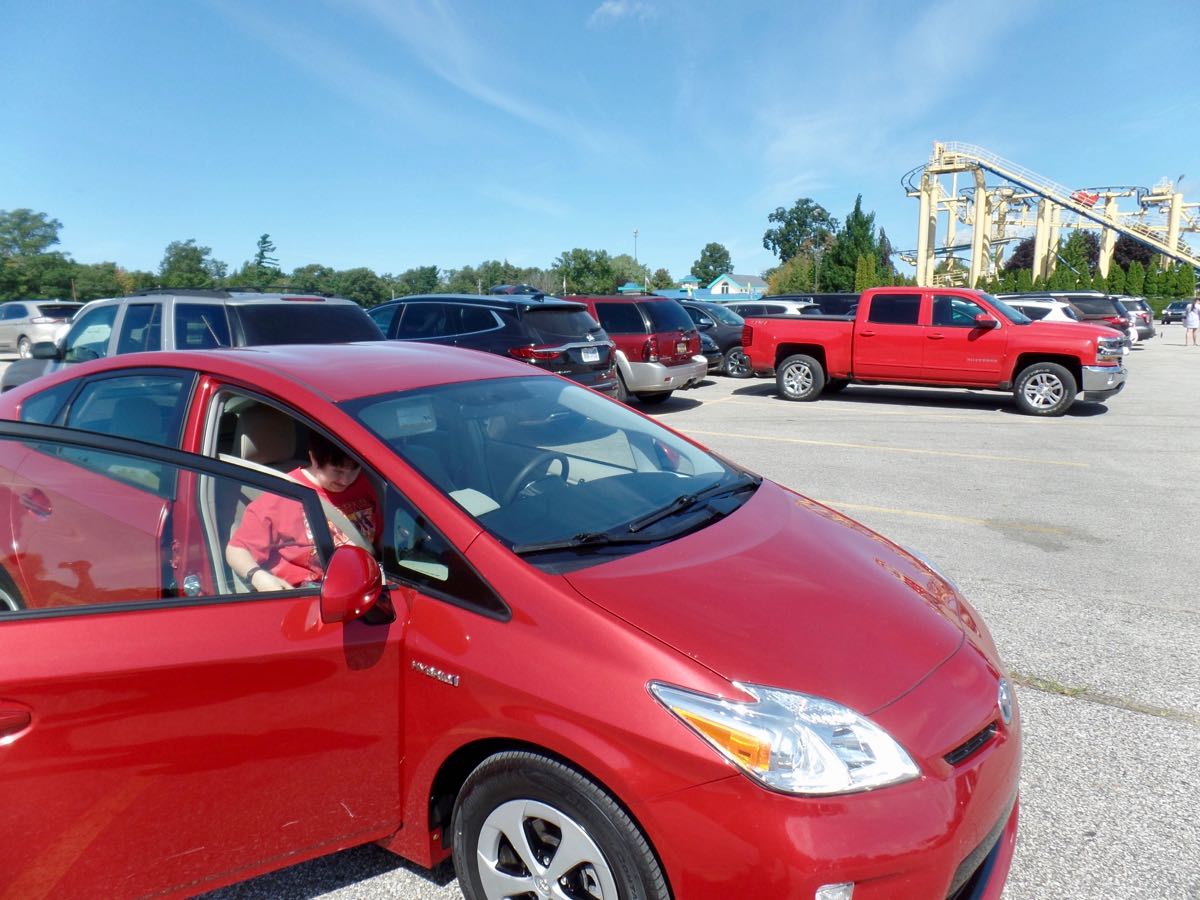 My new car in its first parking spot at Michigan's Adventure, around parallel with the Mad Mouse. This was nicely close to the front of the park, although we did get to the park a couple hours earlier than usual for us so we'd expect the lot to be less crowded. 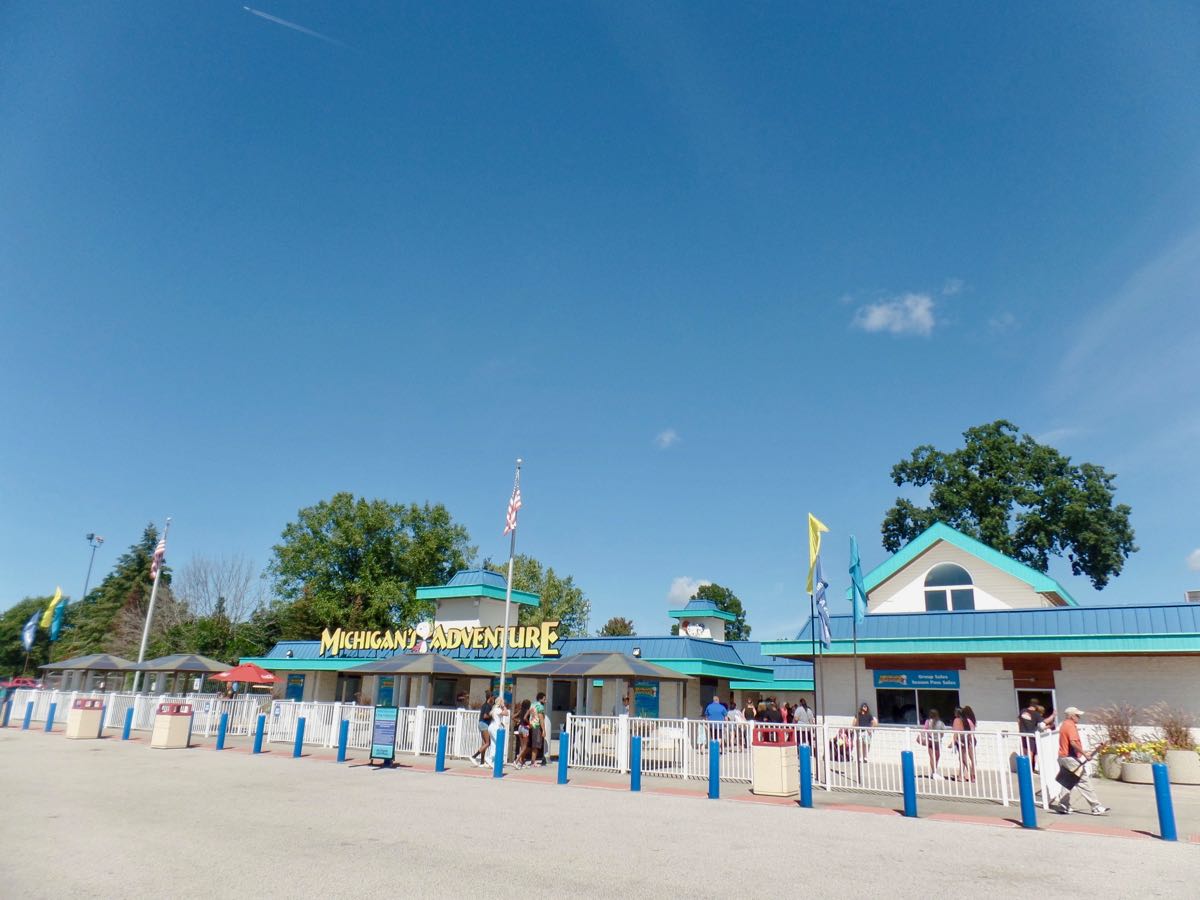 The entrance to Michigan's Adventure. They were just waving people through the metal detectors, as they had in our previous visit here and our visits to Cedar Point, which emphasizes how much the scanners are there just so they'll be able to harass teens and Black people. 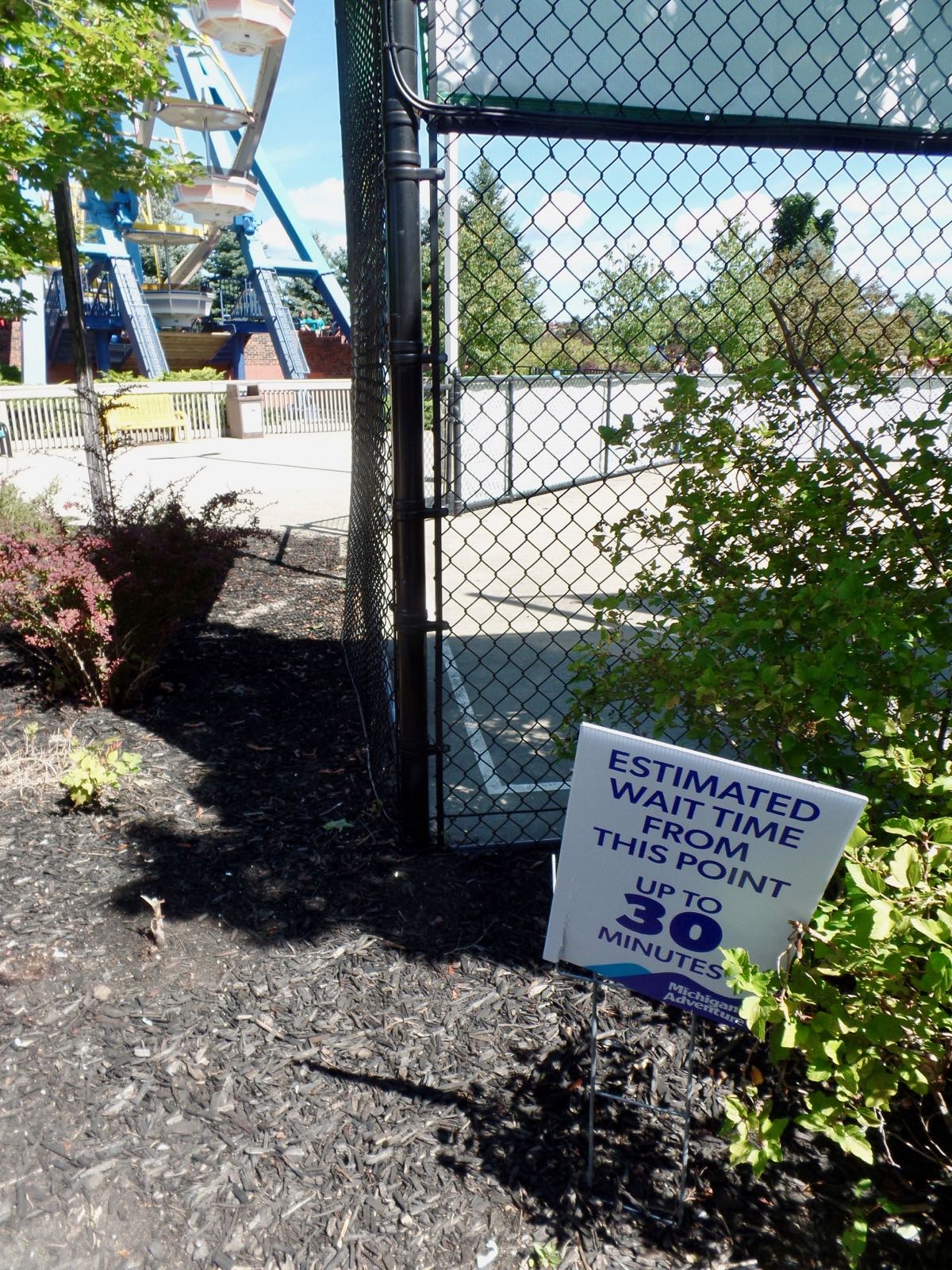 A ride wait sign for the Mad Mouse. Michigan's Adventure hasn't had queue estimates before. The sign seemed to be about right for Mad Mouse. There wasn't any line for Thunderhawk, which also had such signs. 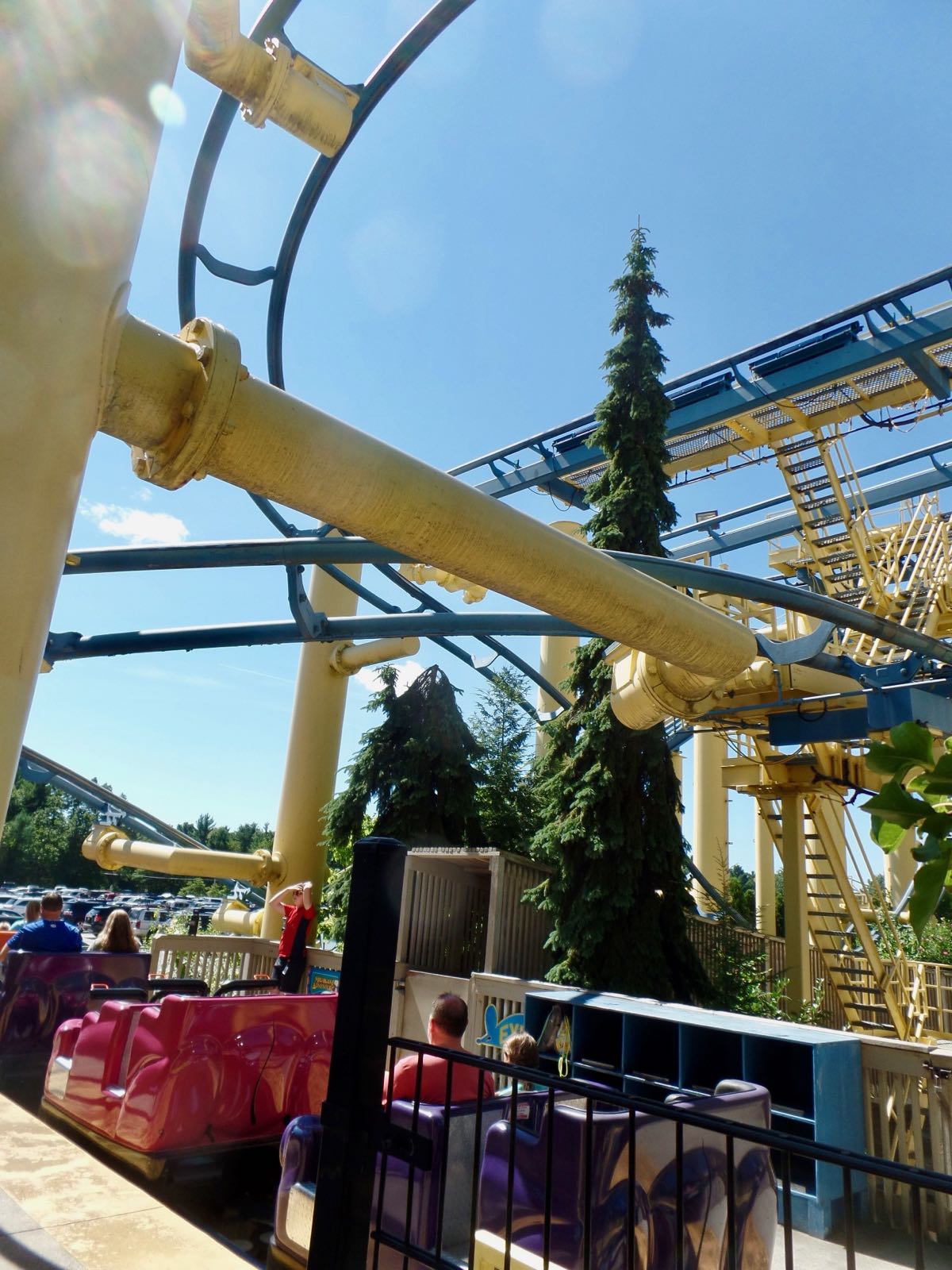 Finally, the station for Mad Mouse. Note the two trees flanking the exit gate, and how the one that's cut off by the track is grown fatter and is trying to send out this poor little second leader that's also going to get trimmed in time. 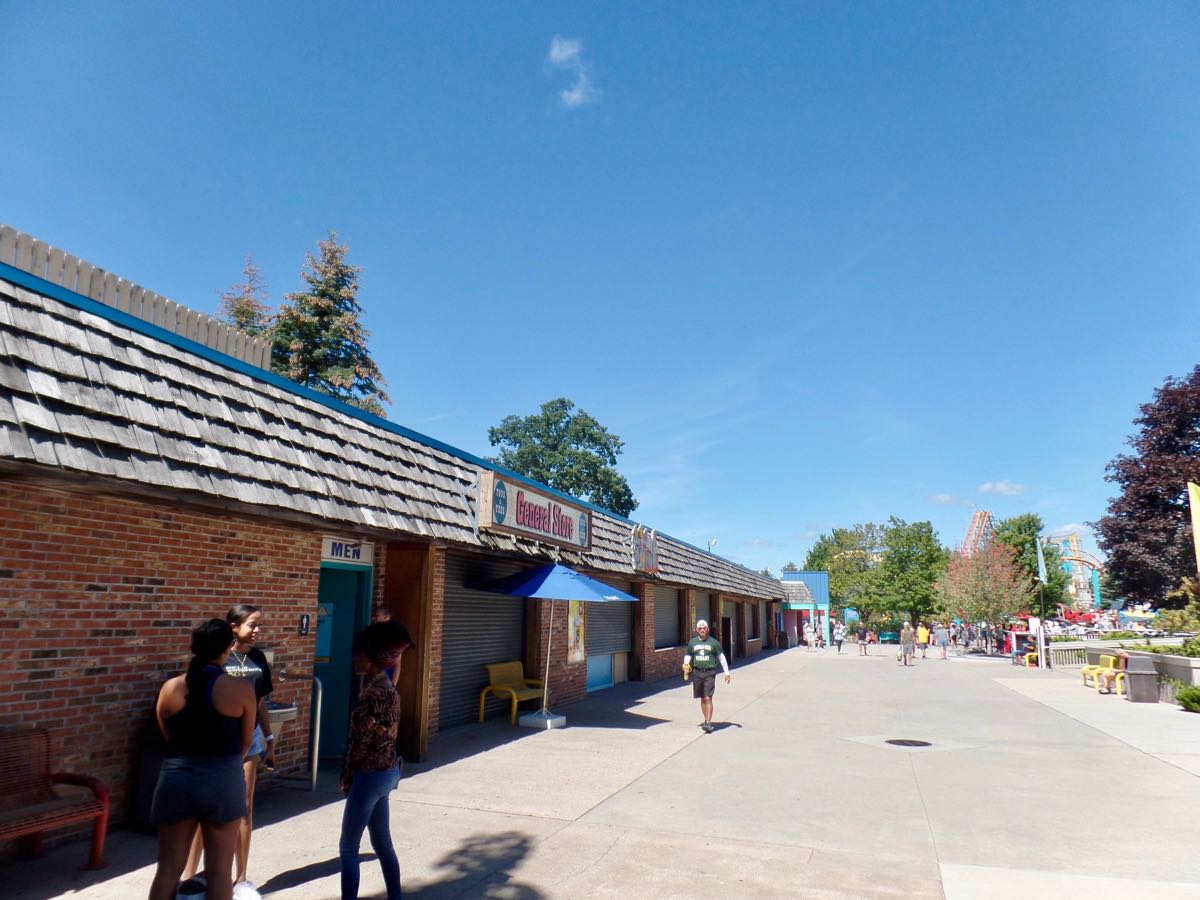 Off the ride and on to the midway. Before the Mad Mouse was put in, in 1998, this was the entrance to the park. The General Store was closed both times we visited and from the bench in front looks like it was out of business all year, which is a shame as they'd have the discontinued and usually more interesting park merchandise. 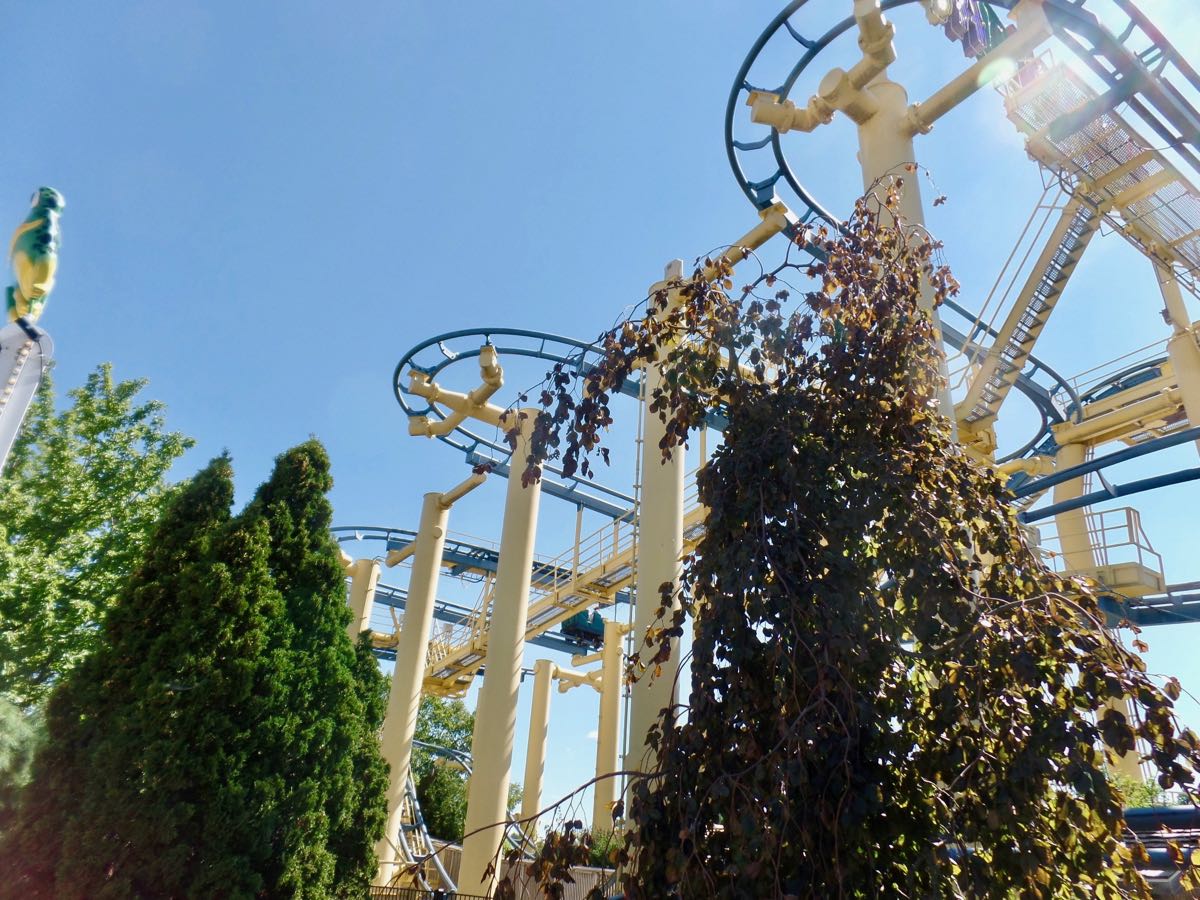 A look back at the Mad Mouse and some of the trees around it. And hey, there's even one train running on it!

Currently Reading: Little Nemo After Winsor McCay, Frank Pé. Oh, heavens, this is just gorgeous. And the stories are ... well, dreamlike, being weird and elusive but not feeling like nonsense. Some have easy metaphorical interpretation, some don't have that I've worked out but I really, really like how it's going.