So how was the Cedar Point experience, on my birthday? Remember that Halloweekends days are usually busy for the park; Halloween is a money factory for amusement parks. And it was a bright, sunny day, this after a dismal rainy Saturday. I was expecting the place to be packed. And it ... might have been? But we didn't see it. Part of that was good ride-choosing on our part. We figured that the biggest rides like Steel Vengeance, Maverick, and Millennium Force would have impossibly long lines. We went to rides that usually have shorter lines, from either lesser popularity (Iron Dragon, Mine Ride) or greater capacity (GateKeeper, Blue Streak). Top Thrill Dragster was down, closed for the rest of the season after a nasty accident in mid-August.

There was a small disappointment as we entered. The Midway Carousel's restored band organ was down again. They were back to playing the exact same single CD of carousel music they'd been playing nonstop since 1998 or so. I hope it's a transient issue and they get back to the actual band organ, the one with hundreds of songs to play. I imagine the ride operators do too because, without exaggeration, I have more carousel music on my computer right now than they do on their CD. Heck, the Merry-Go-Round Museum is just downtown, they could buy five more discs. I've joked that someday I'm going to sneak in a disc, get

bunny_hugger to distract them, and swap it in and I'm sure history would vindicate me.

And a tiny disappointment: the Wild Turnip or whatever the name of their vegetarian/vegan/gluten-free restaurant in the Frontier Trail is was closed. We got cheese on a stick instead, which is what we'd probably have done even if it were open.

There was a large disappointment as we examined the maps and the ground and the event schedule. There was, as best we can tell, no Halloween Parade. There were plenty of the usual Halloween events but not the big spectacle of comically spooky floats and dancers and kids in costumes and occasionally a high school marching band. No marks on the ground suggesting the path, either. We can't explain this. Did the summer celebration parade exhaust their parade budget for the year? It's a hard thing to explain.

That, though, was it for disappointments. What we had instead was a really good day at the park. The weather was great. It felt a little odd to get lunch without the ominous tones of the severe-storm-approaching warning. It seems like there should have been crowds, but they just weren't wherever we were. Maybe they were waiting for the parade. But we got in a lot of good ride time, getting to most of the roller coasters we hadn't been to in June or August. GateKeeper, already a short line, we got to watch them transfer a third train onto the tracks. A delay, yes, but it's neat watching operations stuff happen. We did have to wonder what they figured for the evening crowd, that they were adding a third train onto a coaster that already had a modest, 15-minute wait, but that's all right. Better than a 15-minute wait for a major coaster is a 10-minute wait for the same ride.

And even the major roller coasters held some possibilities. We noticed Millennium Force's sign claimed there was a 30-minute wait, which would be good any time of year. We looked at the queue and that seemed to be about right, so we figured this was our best bet to ride it in 2021. Even if we go back in October, that's always got a line. And things were going very well ... until we were maybe five or six trains from riding. Then the ride went down. People started drifting away from the launch station, passing the word along. They were down for something or other, they didn't know how long it would be (they never do), but when this same problem happened earlier in the day it was an hour until it was fixed. We were welcome to wait, but ...

Well, we gave it a few minutes and then decided we'd rather try our luck on other things. And this was a great choice. We went around to the back of the park where Magnum XL200, their first 200-foot-tall roller coaster, was a walk-on ride. Over to Gemini, where both trains were running. This was again a walk-on ride, and we got onto the red train that had been running empty last time we visited. And then back around to blue because why not get both sides in? We didn't figure we could possibly ride Maverick or Steel Vengeance, but the Mine Ride? Sure, another walk on. And this one they were assigning seats on, for some reason, and gave us the front seat. We rarely ride in the front seat and did not realize just how close the feel of the ride, from the front, is to the feeling of a wild mouse coaster. And after that ... we still had moments left before the park officially closed at 8 pm. We could run back around to another ride on the Mine Ride, or we could hop onto SkyHawk, the giant swing ride. We went for that, a ride where they normally assign seats (to keep both sides of the giant pendulum swing balanced) but did not, this time. And so we ended the night on a run of five walk-on rides, on this gorgeous, sunny, happy day.

After the day was over

bunny_hugger noticed she had lost one of her Cedar Point pins, the one commemorating the long-gone Earthquake ride. She regretted wearing it, given that, but the point of these pins is to wear them, so what can she do? She's found someone online happy to send her a replacement, and she's got a heavier lanyard that should make it harder to lose pins in future.

But the day was good, even if the detour made it take too long to fall into bed.

And now the final photographs from Michigan's Adventure for this season, with what we saw after our last ride on Mad Mouse for the year. 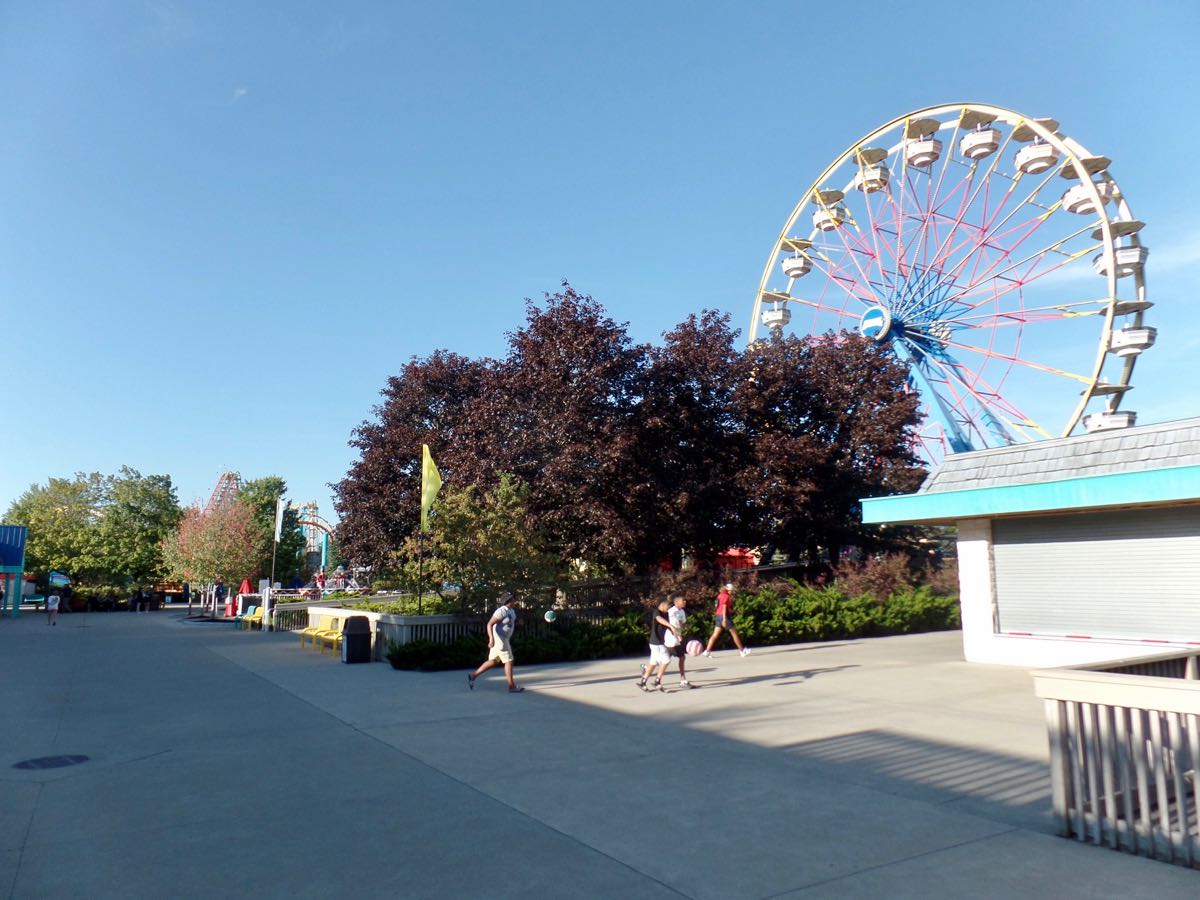 A look from outside Made Mouse's gate, up the old main midway of the park. Someday I'm going to take the Ferris wheel myself to get aerial photos of the park. 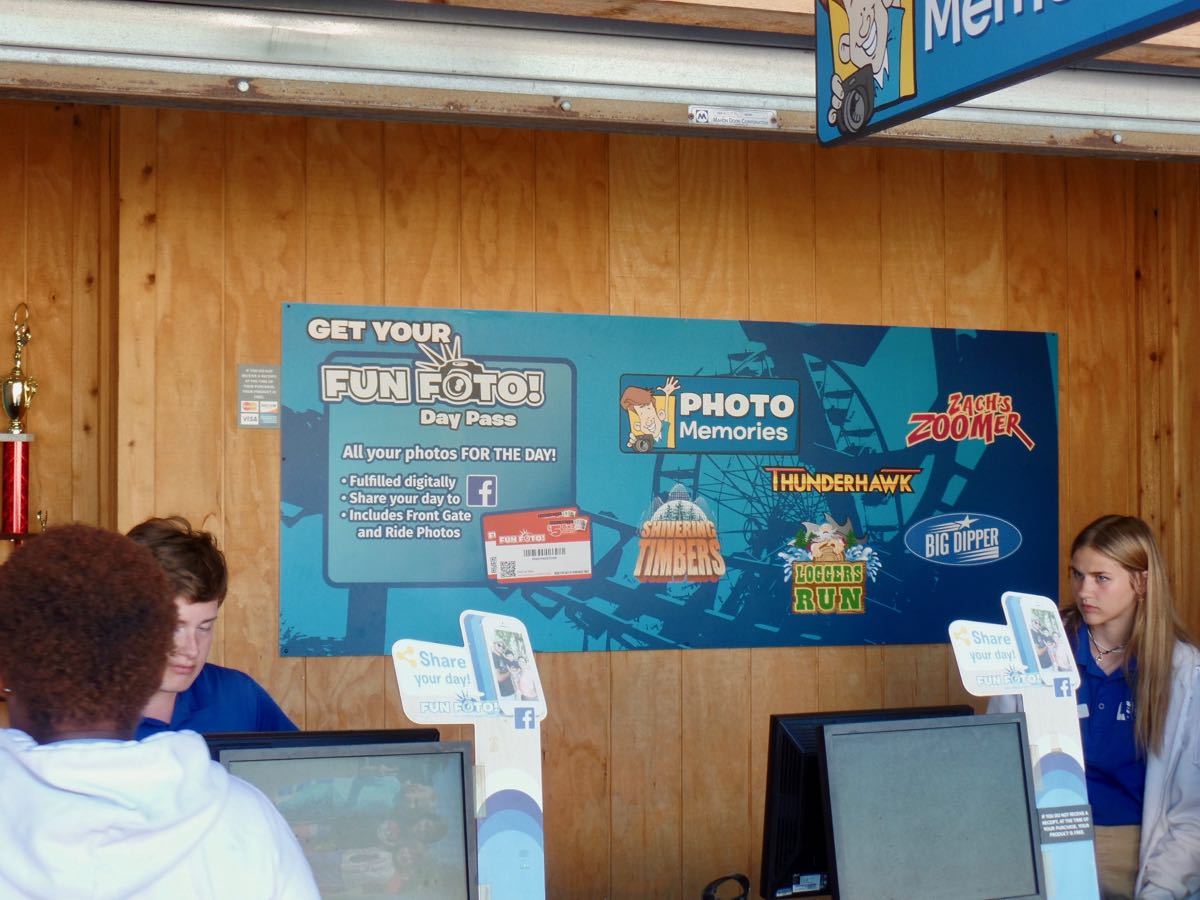 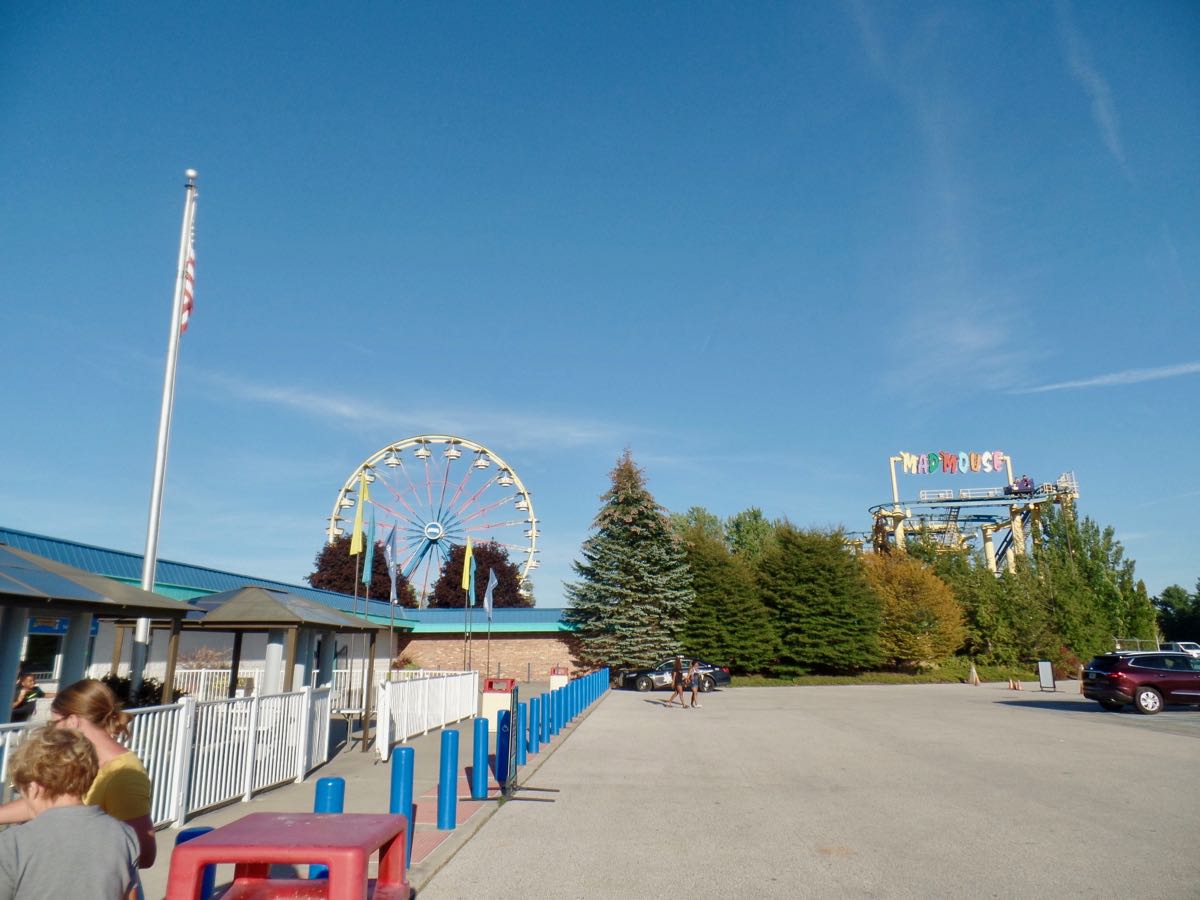 Just outside the main entrance, and looking east, toward the Ferris Wheel and the Mad Mouse. 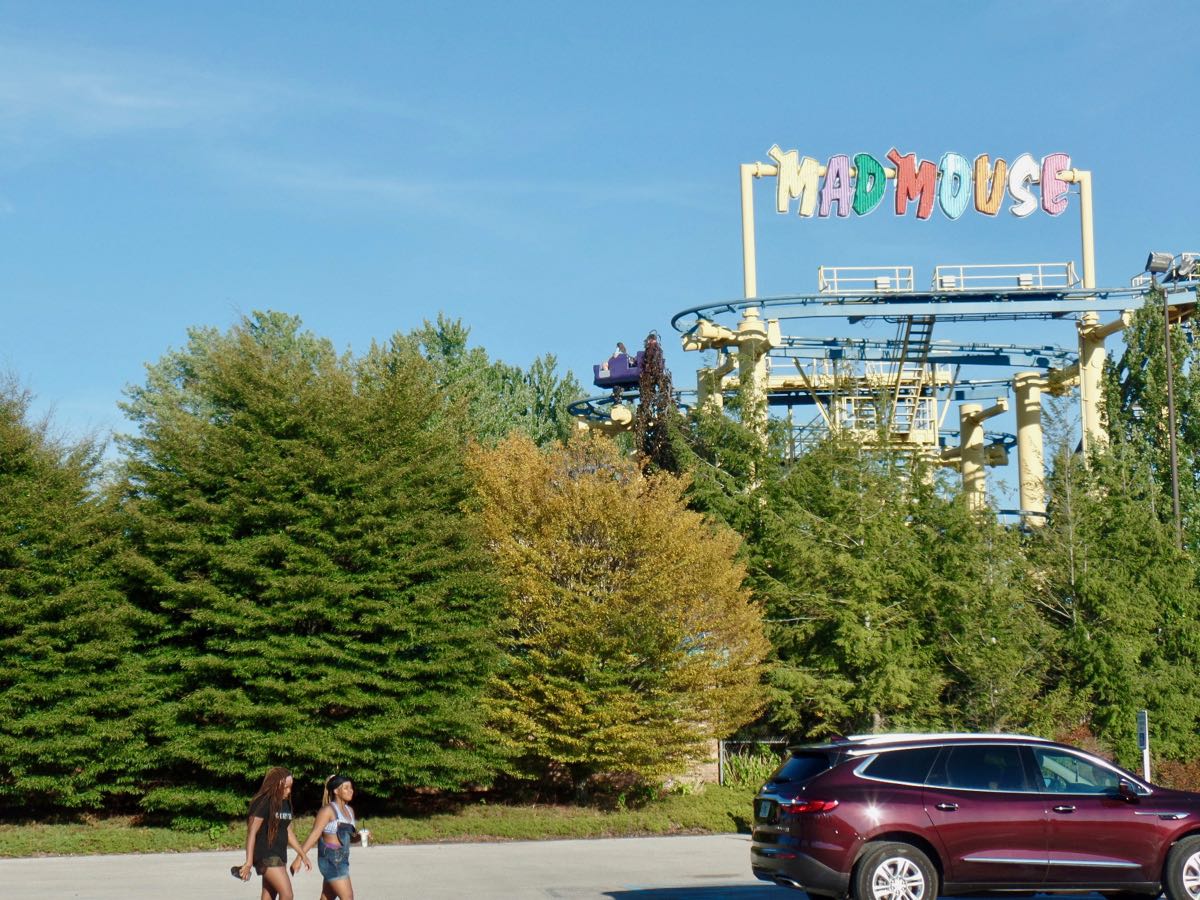 Better look at Mad Mouse from an angle I don't think I've photographed too excessively many times before. 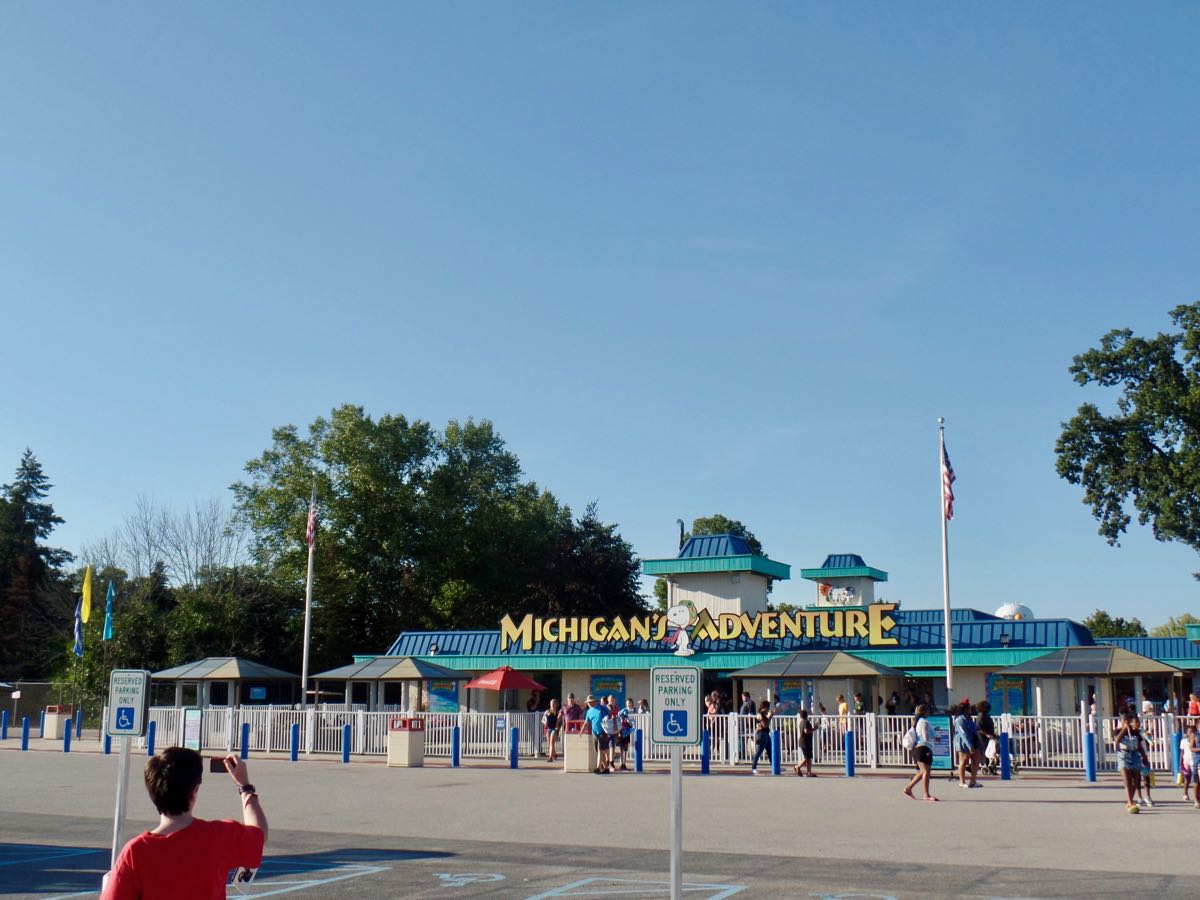 And a last look at the entrance of the park, just in case they renovate it while we're not expecting. 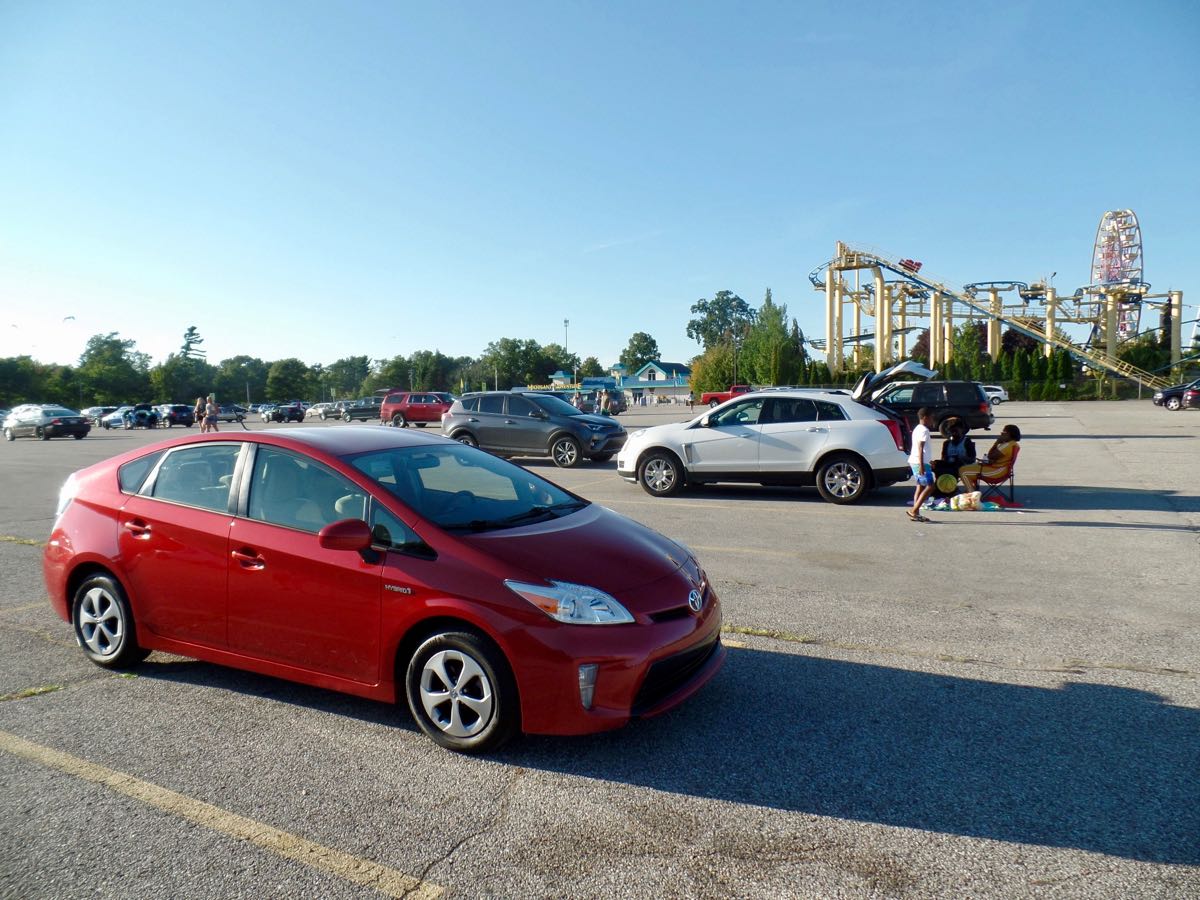 And there we are, one last look at my new car in its first visit to an amusement park, and our first trip to somewhere.

Trivia: By February 1861 the Charleston and Savannah Railroad had purchased 6,713 acres of timberland, hoping to make themselves independent of wood sellers when war came. Source: The Railroads of the Confederacy, Robert C Black III. (I don't see mention whether they succeeded.)

PS: My Little 2021 Mathematics A-to-Z: Addition, second of the topics in this abbreviated run.