We had a spate of home repairs Monday, just the sort of thing to fill up the day with the feeling that you can't do anything else.

One was plumbing. When I was using the shower to clean the shower last week I caused a leak through the kitchen ceiling, in a new spot from where we last had a leak. So we called the plumber and between when I called and when the appointment was we got a new issue in. That would be a steady and rather loud gurgling from the drain in the basement.

They spent a good while examining the leak. The verdict there was that we had little problems in the caulking around the bathtub. This is fair as the caulking had been consumed by mildew years ago. But a little spot was channeling water right to a gap between the bathtub and the floor, right where it could come down into the kitchen. The plumber offered to let me just re-caulk it myself, and save on the labor charge, but I'm also aware how long it would take me to do a twenty-minute job myself. So he scraped the caulking away from the front half of the tub and laid new beads down, that we're to leave to dry until ... about when this posts, actually, so I hope I remembered to take a bath rather than a shower this morning. (Remind me about this, please.) Also maybe put a towel on the edge of the bathtub to catch stray water. And maybe use a magnetic shower curtain to keep a steady barrier between water and the floor over there. Good steps, all. This will all become academic when we do the big kitchen remodel ... someday.

The gurgling, though? Well, that had stopped by the time the plumbers arrived, of course. It's almost certainly inadequate gas venting in our pipe. This is caused by our house being built in 1928[1], and so not up to any known code. They can drill out the old drain and put in a modern one, with proper venting and backsplash thingies so that we can't get sewer gas seeping back in the house and all. That'll be, depending on how hard our house is to work with, something like $800 to $1600. The plumber recommended that as long as water is still draining all right we let it slide. He thinks the problem was aggravated by how we were getting a steady lot of rain last week, with water divided between our sump pump and our drain. As it's not raining now that's why the gurgling stopped before he could get in.

[1] Lasnerian 1928. We've held that as our house's construction date, but we've seen old real estate listings giving its build date as years from 1925 through 1930 so someone's approximating things somewhere.

The electrician, now, he was in because the outdoor electric sockets had stopped working. I know what you're thinking: just pop the GFCIs and they run again. Well, I did that. I also checked the circuit breaker and I even shone a flashlight on the outlets, which didn't help. So that's why I called in the electrician. While I waited inside he did ... something .. to both the outlets, with a power drill and I'm not sure. But it didn't take long and everything was good after that. So we now enjoy, we hope, a house that's more intact than it had been two days ago.

And now more Cedar Point photos from my birthday trip. 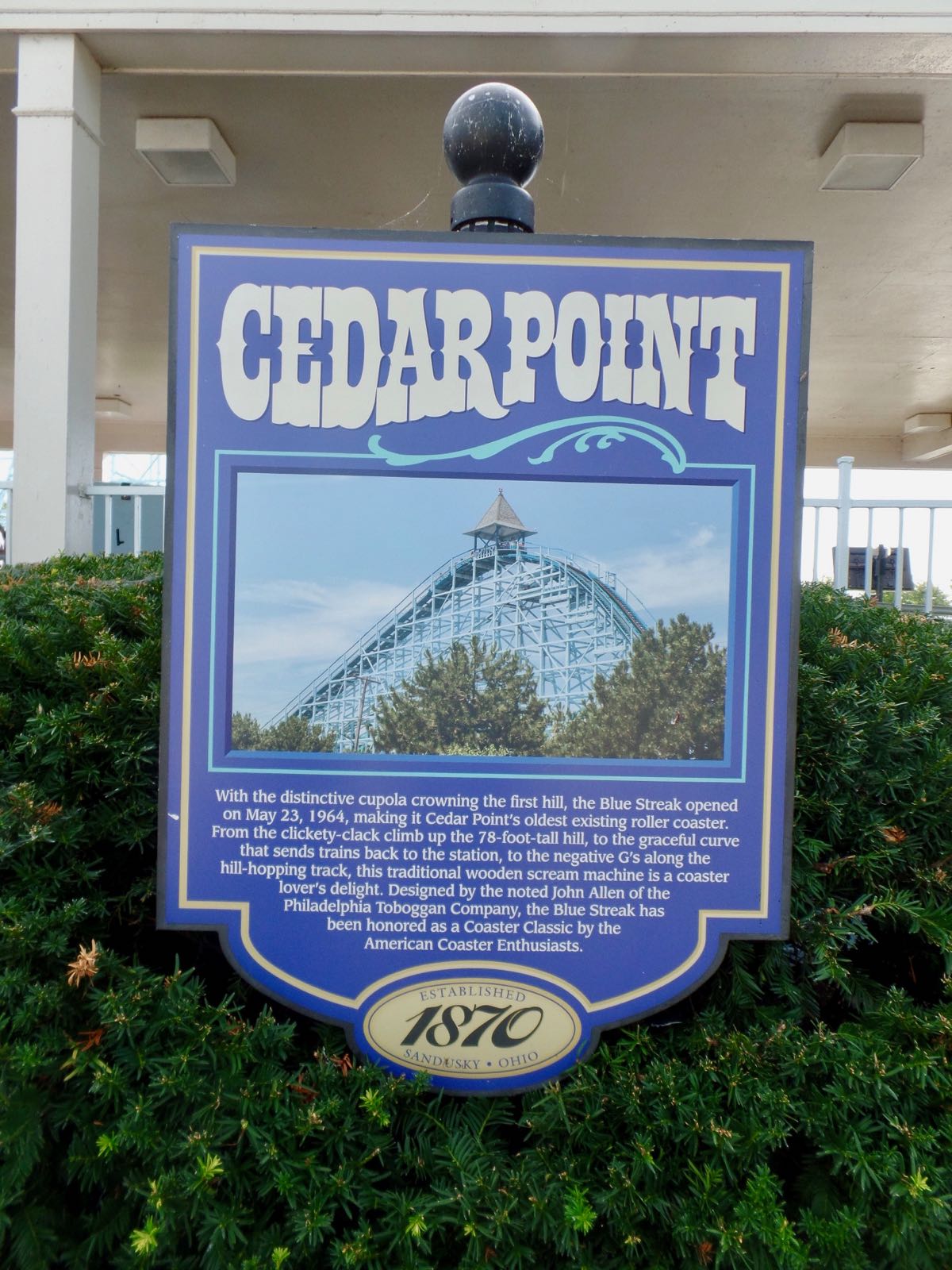 Historical marker for Blue Streak, including some description of what makes it a great ride, including that it's a wooden roller coaster. There's some fine work being done in that last sentence about how the Blue Streak ``has been honored as a Coaster Classic by the American Coaster Enthusiasts''. It's literally true, as ACE honors as a Coaster Classic roller coasters operated in the old-fashioned ways, particularly, with a single lap bar across both seats and without seat belts or dividers. Blue Streak put those in several years ago and so ACE withdrew the Coaster Classic designation. 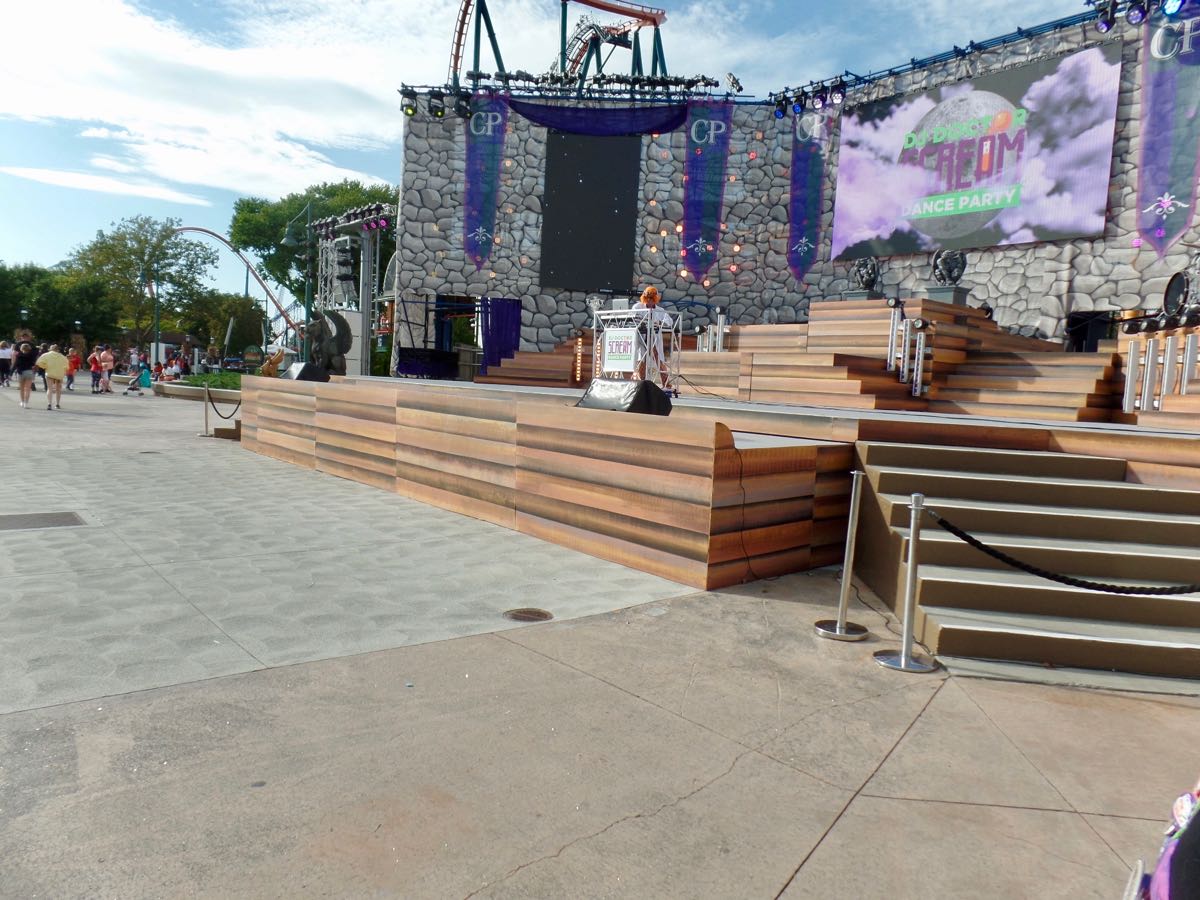 DJ Doctor Scream, running his dance party, before an audience of ... nobody who'd stopped to listen to the music. I feel so bad for the guy. 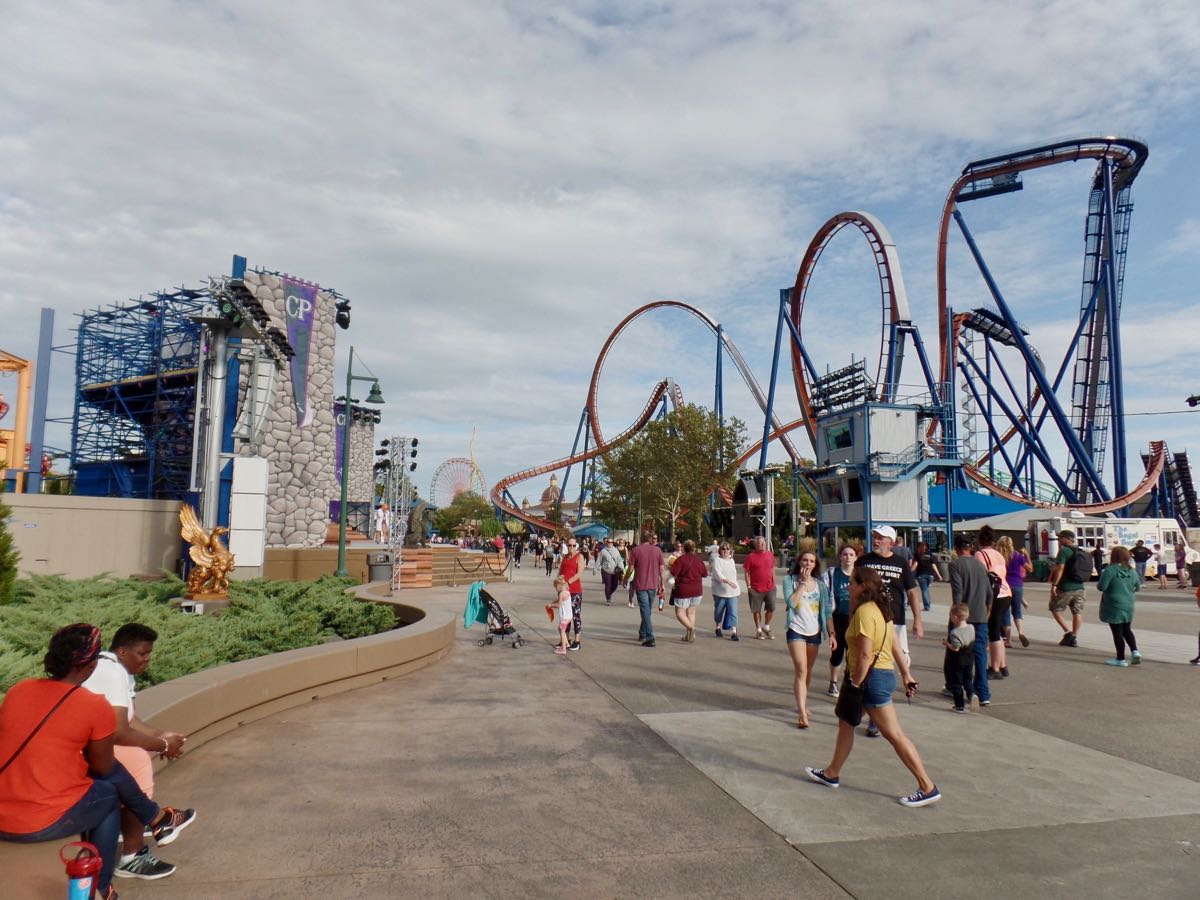 A look back at DJ Doctor Scream's stage, on the left, and the great pile that is the ValRavn drop coaster on the right. 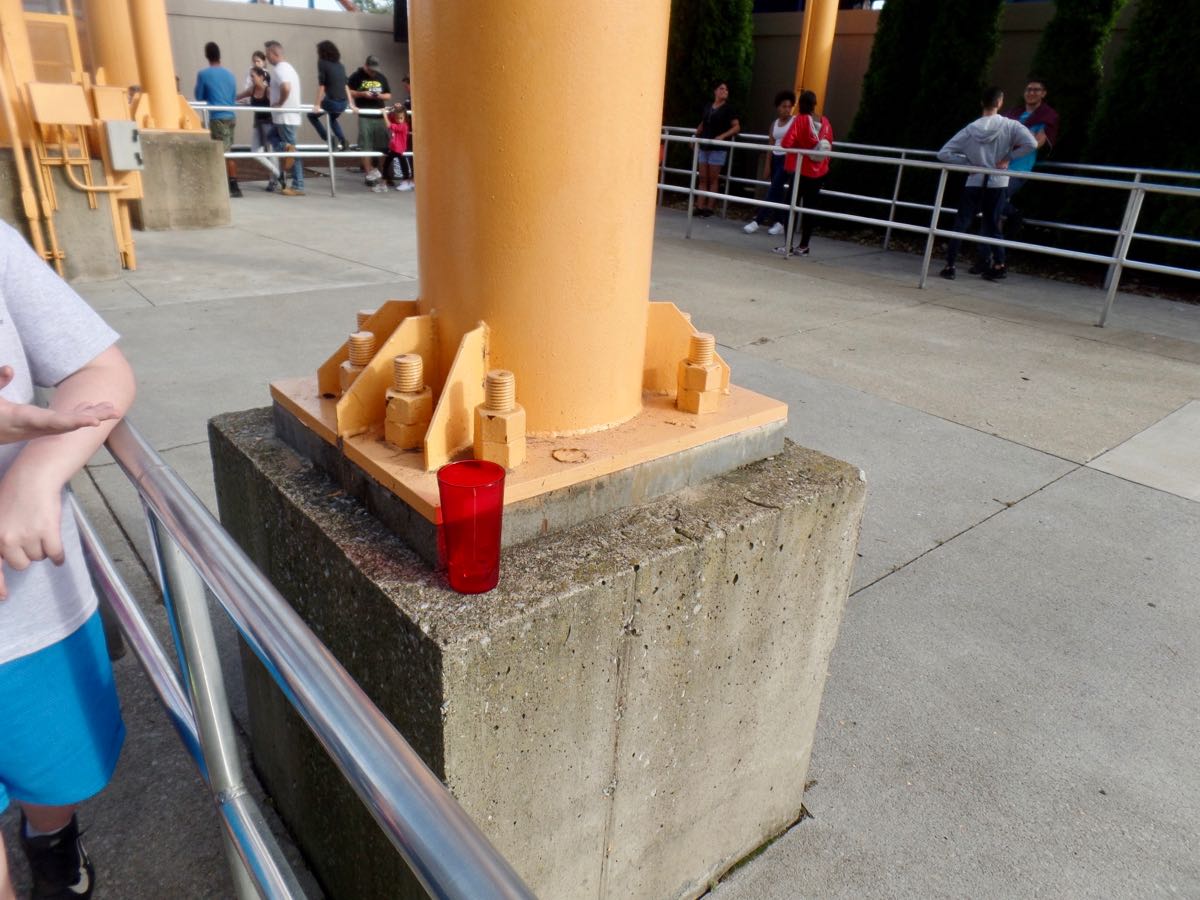 Plastic drink cup that was abandoned in the queue for Iron Dragon somehow. It looks like the ones from the indoor restaurants so we have to suppose someone just made off with their not-yet-finished Coke Zero and figured this was as good a place as any to leave it for cleanup. 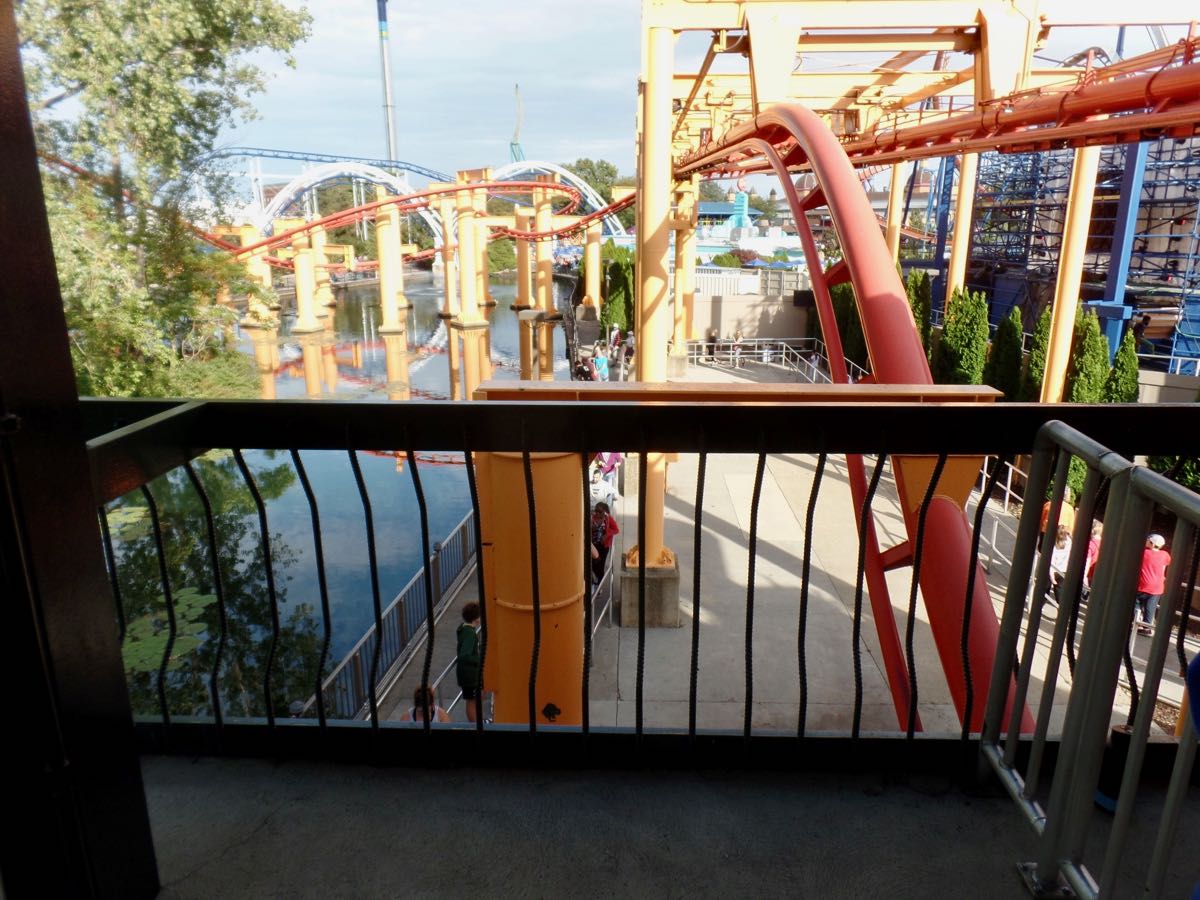 Looking out at the return path for Iron Dragon. The great dip down there is for the transfer track used to bring a train out of service. The storage bay is underneath the platform here. I'm not sure how they put a train back into service. 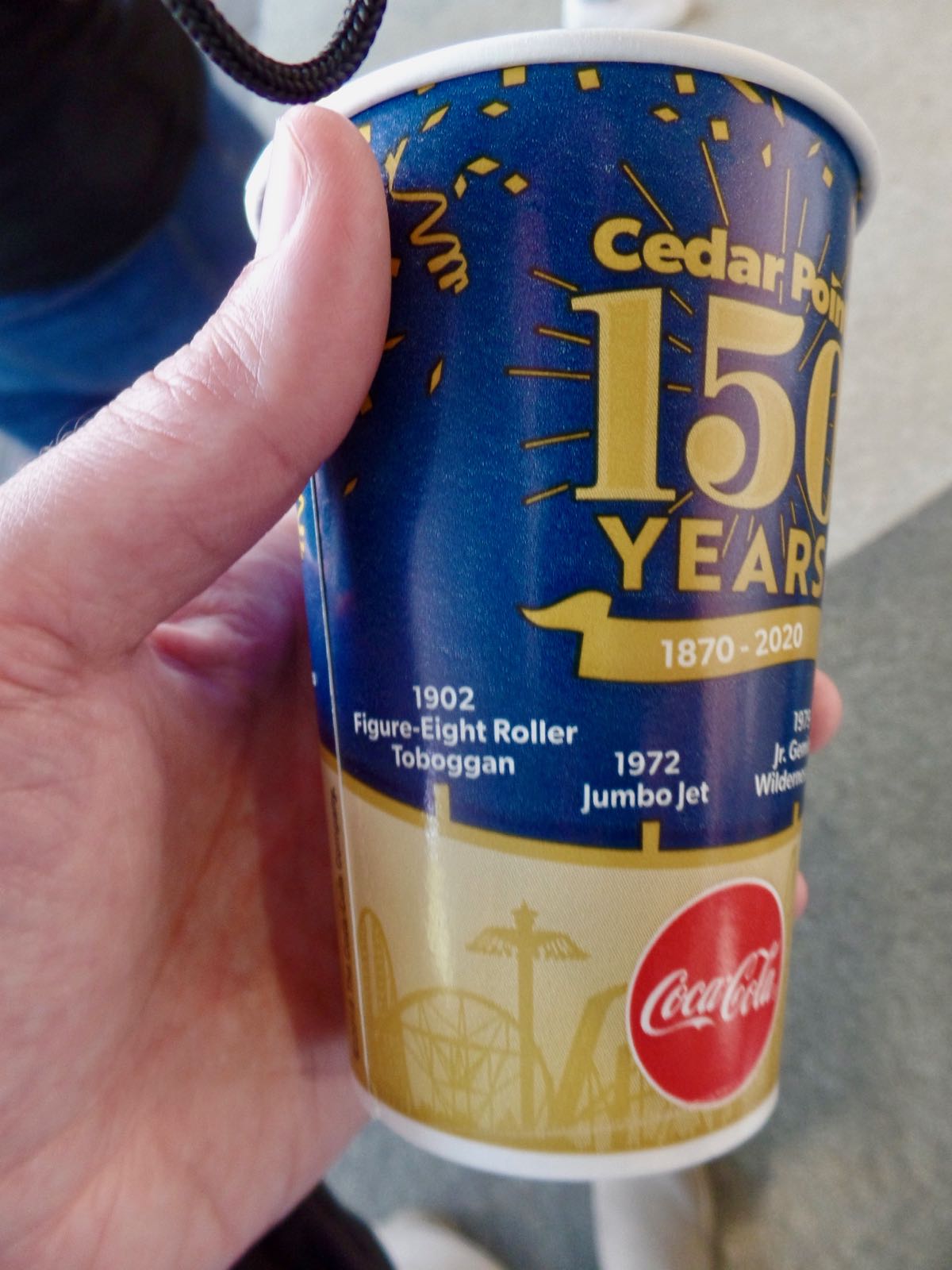 1902-1972 was a slow seventy years for roller coasters at Cedar Point. (The sesquicentennial drink cups don't try to list every roller coaster, and they have different runs with different sets.) 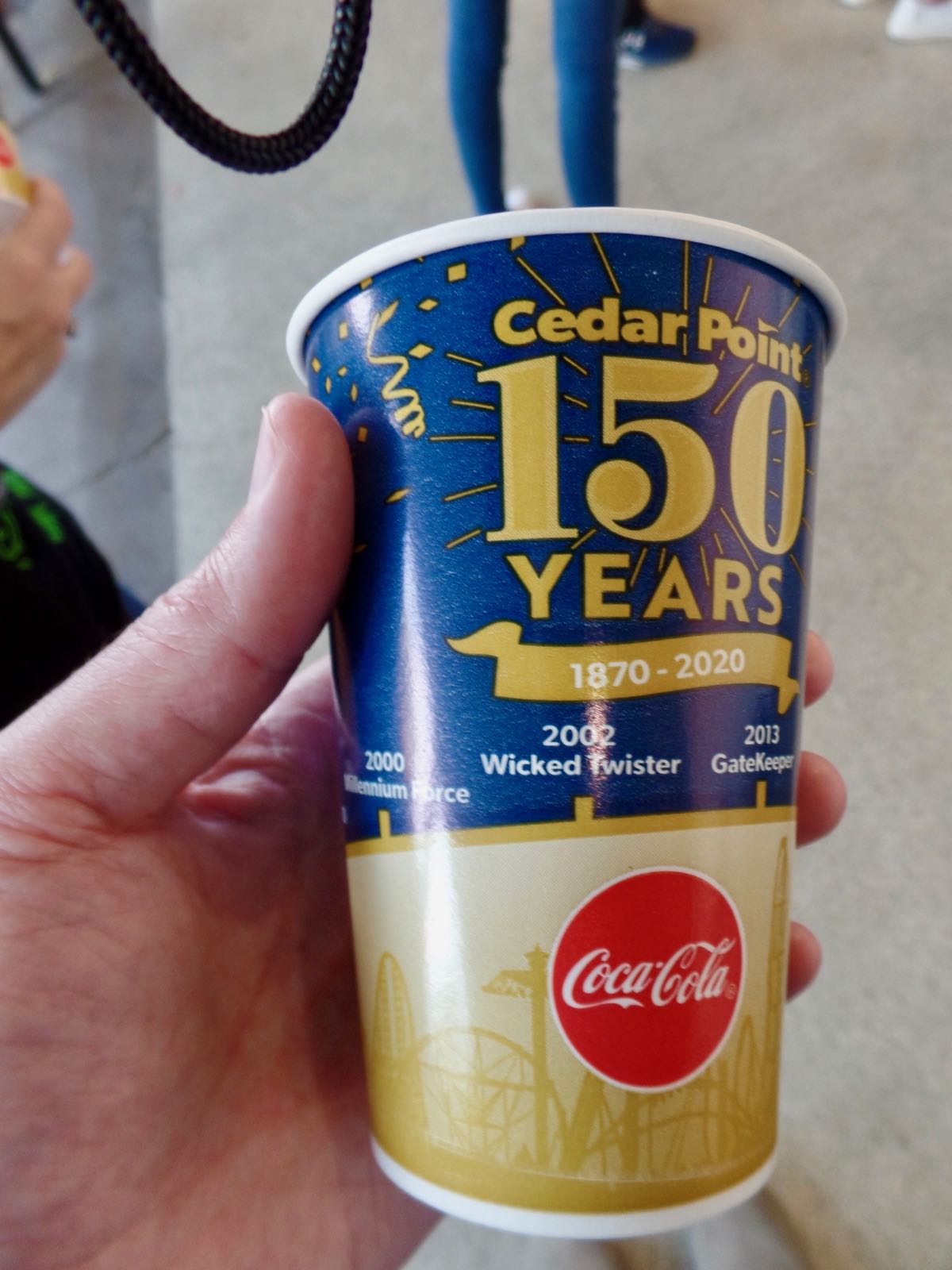 Hey, some love for Wicked Twister on my cup here. And you can see Millennium Force getting in right on time there with its 2000 debut.

Trivia: For a formal dinner party, the oyster or shellfish fork is the tiniest fork, and set on the far right, the tines resting atop the soup spoon. Source: The New York Public Library Desk Reference, Editors Paul Fargis, Sheree Bykofsky.

Currently Reading: Tom and Jerry: The Definitive Guide to Their Animated Adventures, Patrick Brion. Brion also talks a good bit about Fred Quimby's leadership and management of the M-G-M animation department although without ever saying anything he did, and quoting that line about how the only thing Quimby brought to the cartoon-making is that his name looked great on a title card. I'm genuinely interested in learning how someone who's been completely ignored in animation history might have been more important than that, but I don't see Brion saying what Quimby did besides not get in the way of Hanna and Barbera and Tex Avery and all.