I got up ... well, late, today, but figuring to get to the credit union, get my thing for the car thing notarized, and sent off. No joy, though. While Google Maps was of the opinion the downtown East Lansing branch was open to 3 pm, the branch was of the opinion they closed at 1 pm. So was a man sitting around outside who explained the situation to me after I tried the door (I figured it was a long shot, but, what the heck, I was already there). And then explained it again. And then explained how there'd been a sign for a month saying their hours were changing and I offered that I hadn't been there in a month.

Longer than a month, of course; I don't think I've been to East Lansing since the start of summer. Some stuff has changed. The Jersey Mike's that used to be there is gone, replaced with something called PokeFusion which I assume where all the Lucarios in town eat. The Pita Pit is gone, too, replaced with a cheesesteak place. That really hurts, since they had a variety of vegetarian options and made a filling lunch. Jersey Mike's, nice as it is, has basically one vegetarian hoagie. For want of any other reason to be downtown I went to Flat, Black, and Circular, the used record store. Came out with a DVD of Chip and Dale cartoons at least. And that took long enough that I just tripped past the 15-minute free parking downtown; if I'd been two minutes faster, I'd have got out of the parking lot without paying.

After that I called my parents. My mother had called yesterday to say she was going to take care of the notarized letter thingy. My father has called 42 times in the past three days, leaving messages of ``Hello hello ... Hello? ... Hello? ... HEL-loo? Helooooooo? ... ... ... Good-bye'' at inconvenient times for me to talk. Besides giving them the usual updates and expressing me despair that this insurance stuff will ever be finished --- earning me a pep talk that I neither wanted nor needed; I'm not a good one for receiving pep talks --- my mother wanted to interrogate my statement that I haven't thought of what I want to do next. So while I tried to find a way to chew my own leg off and escaped she narrowed down that what I want in a new job is ... I dunno, something like I had in my old job except maybe I sometimes do some actual mathematics. She warned that a permanent teaching post at a university was probably not likely and, yeah, thanks, knew that going in.

It did get me to articulate something I've realized I liked about my old job. Despite being a tech job, it had no serious ethical problems. It was government-support work, yes, but it was all about making it easier to research, and update, property assessments. I won't deny there are problems with the use of property taxes and that there's racism in how they're applied. But the taxes are needed, and are a reasonable thing to assess, and the records of that should be as accurate and convenient as possible. And absolutely none of it was about encouraging bad-brain habits. Nothing to drive ``engagement'', nothing to make people fear missing out, nothing to gamify anything. Just building web sites where people can find stuff they needed to know, or can correct stuff that's mistaken. And it wasn't a workplace that expected crunch or marathon sessions or anything. Just, work at a reasonable load, report if a deadline is un-reachable. It's hard to figure where I can get a job that's as moral, much less one that's paying a hundred thousand more than my last one.

And now we close off the photos of the Cedar Point trip, back in September. What could come next? Is it the return to abundant photographs of a ten-block area around my house? You'll see ... 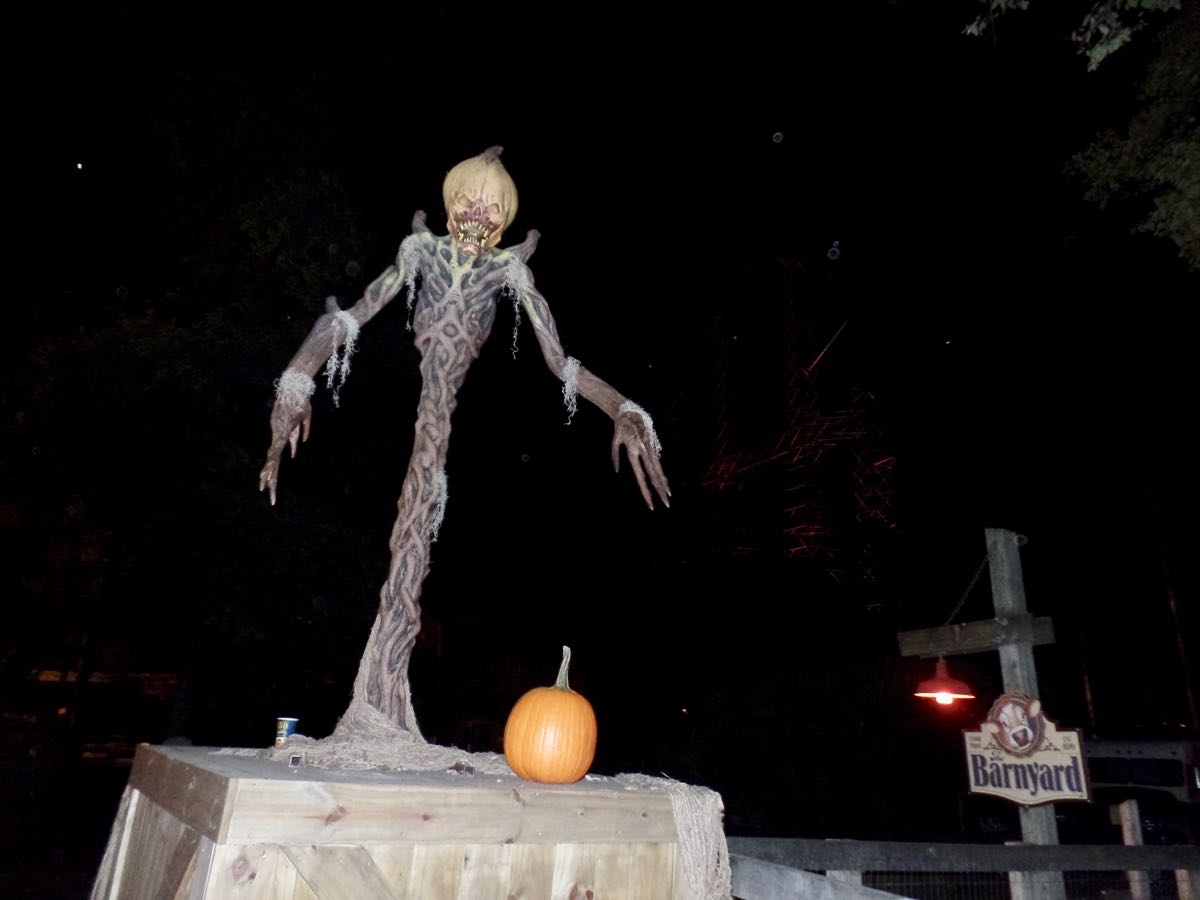 There's the figure our performer warned about! With a bit of flash the scary figure is obvious, as is the abandoned drink cup, but the roller coaster in the background is completely gone. 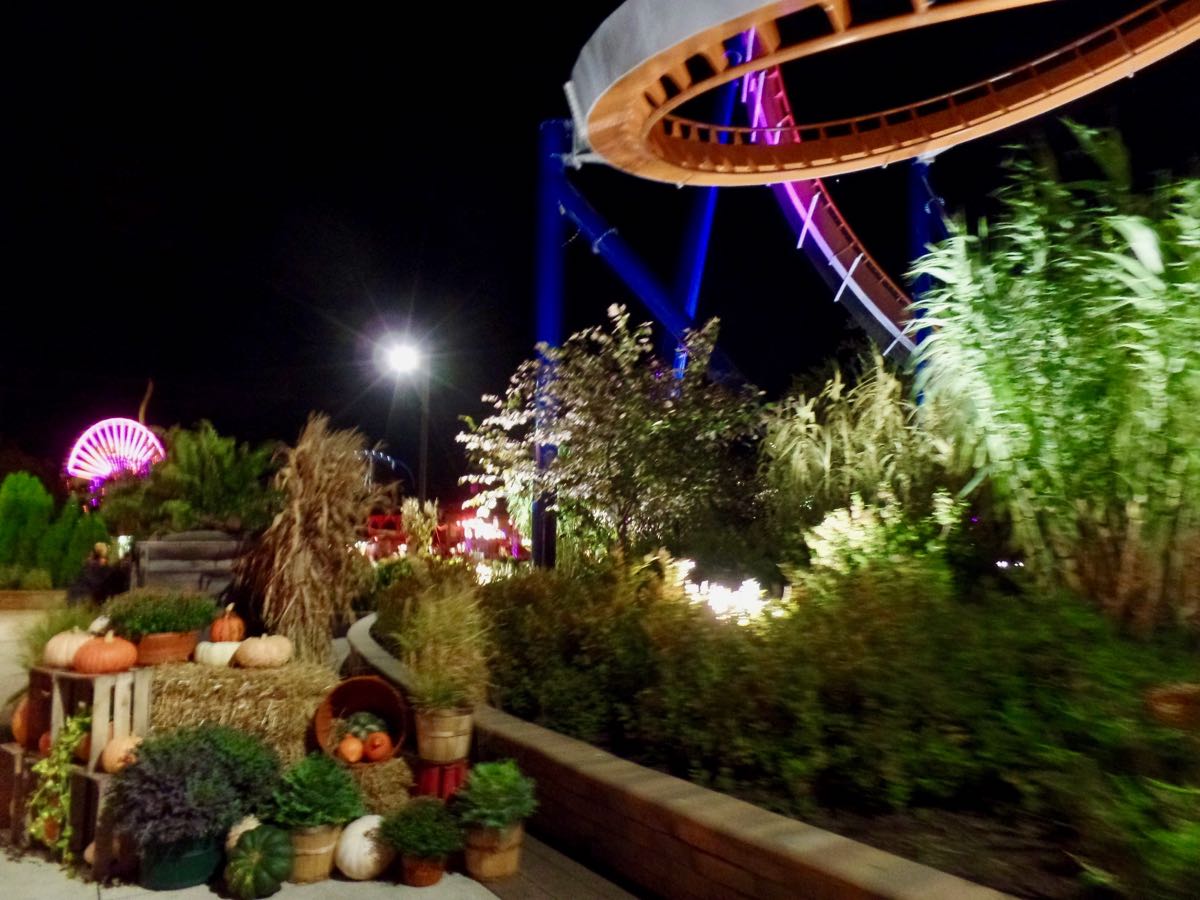 Little harvest display set up near one of ValRavn's sideways loops. 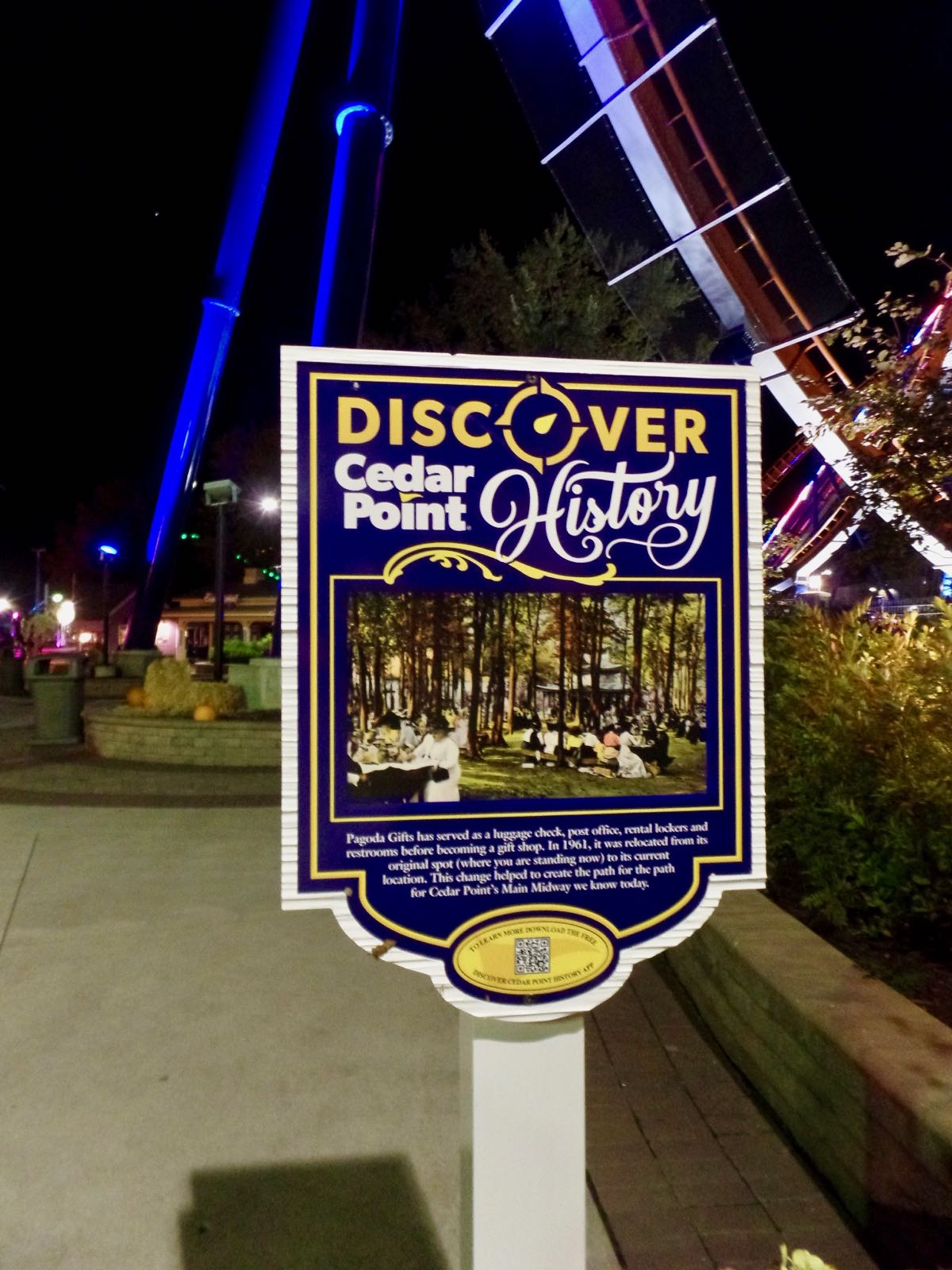 Historical marker about the Pagoda Gift Shop, which used to be in a different location near what's now ValRavn's territory. Apparently before being a gift shop it had been a baggage check (?? ?????? ??? ?????), a post office, rental lockers, and bathrooms. The baggage check is odd because, yes, we've seen you used to drive through the park to get to the Breakers or the Cedars, the two hotels on the point. But then why not check your luggage at the hotel where you were staying? What problem did this luggage check solve? 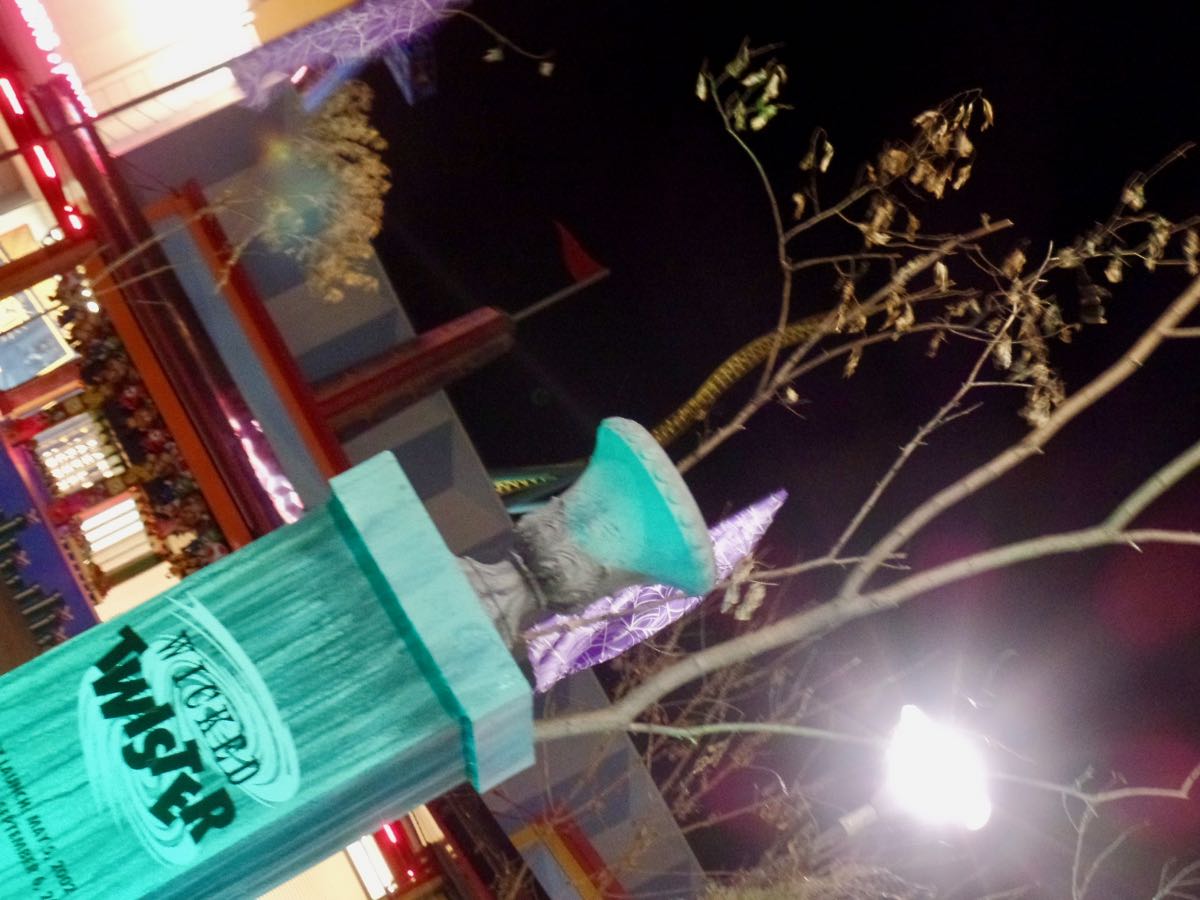 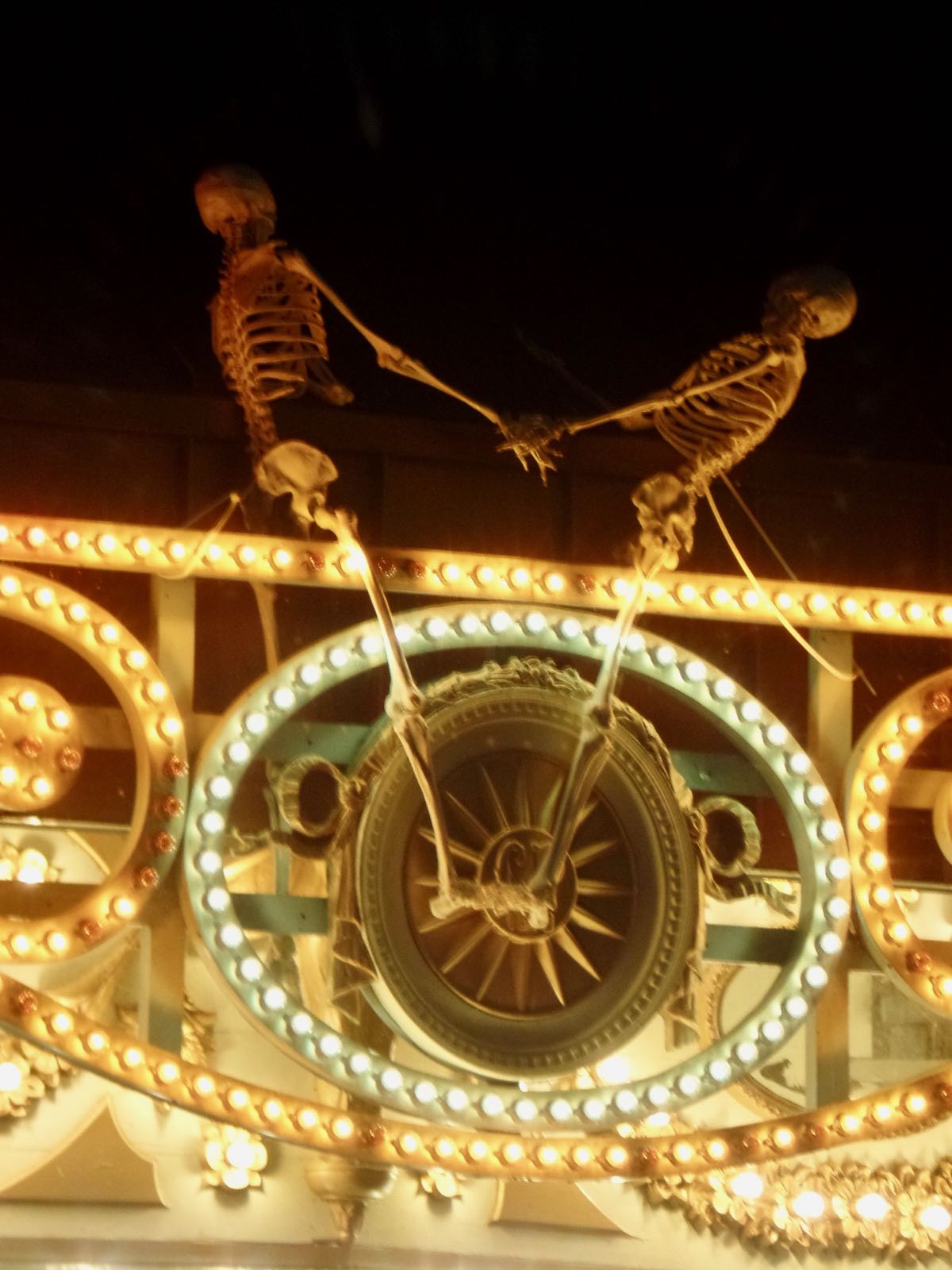 Skeletons enjoying one another's company while riding atop the Midway Carousel. 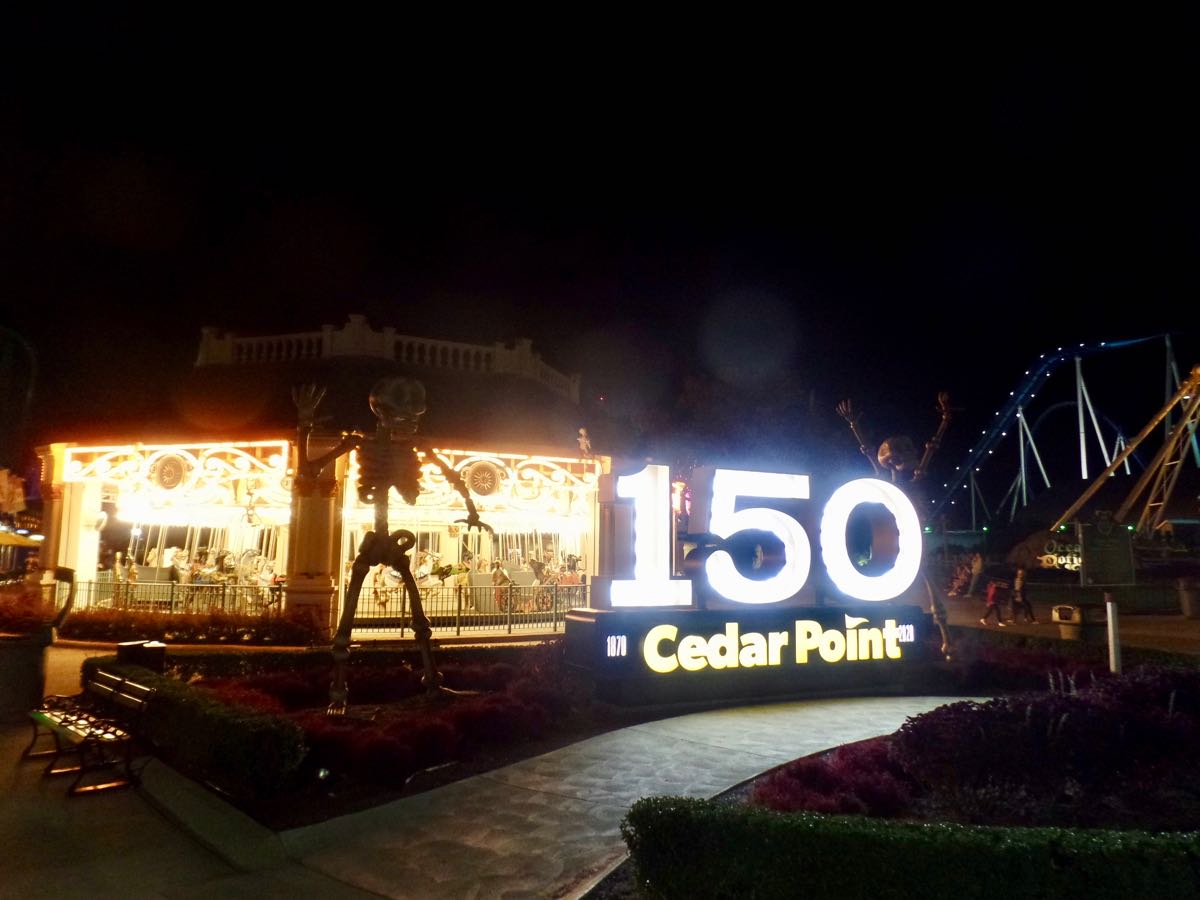 The 150 Years sign, with skeletons flanking it, by night.

Trivia: During a test one window blew out of LM-5, the lunar module that would become Eagle. Source: Chariots for Apollo: The NASA History of Manned Lunar Spacecraft to 1969, Courtney G Brooks, James M Grimwood, Loyd S Swenson Jr. If I'm reading the notes right this would be the small docking window, above Neil Armstrong's station and used when the ascent stage returned to the Command Module. The Commander had to look up to see how close he was getting to docking. (The Lunar Module Pilot had no such window.)

Currently Reading: Tom and Jerry: The Definitive Guide to Their Animated Adventures, Patrick Brion. Brion has a weird set of errors in describing the Chuck Jones-produced Haunted Mouse, apparently having missed that the plot is Jerry's identical cousin Merlin, the magician, is visiting and has magic powers of hypnosis and telekineses and all. And even weirder at one point identifies Jerry as Jerry's girlfriend.