bunny_hugger and I would go our separate ways a bit. The thing is she's been taking an online course, part of making use of her work benefits before they take work away from her. But it was time for the first exam in this course. She hoped to do some review problems and take the practice test on Friday, and then use a two-hour open block of time on Saturday to take the exam, due at the end of day Sunday.

What she just assumed was that the review pages and the practice test would be available. And they were not, with the site not connecting at all. She suspected something transient and no, it lasted. She suspected the hotel Wi-Fi didn't like it, and we hadn't brought our Mi-Fi device for a second connection option. She did try connecting it to her phone. That Internet option let her get to Google, Facebonk, and Flickr, and that's about it. The phone's strangely small Internet was a transient issue, but the class materials was not. She would eventually discover the status page for evil textbook company Pearson, who provides all these course materials. It was having a major service interruption, with everything needed for the class unavailable most of Friday. This would eat up so much time: first, in trying to access the site. Second, in trying to get the instructor to declare what was really necessary, that the due date for the exam would be pushed back. The site would be inaccessible most of Friday and Saturday, although

bunny_hugger found some class materials on a simplified, but worse, web site intended for ADA compliance. And, after many e-mails the class instructor would finally ... make a declaration that sure sounded like the exam deadline would be postponed, although without being clear about just how long it would be open. (

bunny_hugger said she'd have extended it a whole week, given how much of the weekend was knocked out. I probably would have too.) Still, getting to that point kept her tethered to the hotel room for quite some time, Friday and Saturday.

While she struggled to study, I poked around the convention. The programming was lighter than usual. Some of this is certainly pandemic-related. For example, the board game room didn't have the usual stock of seven billion games, because the people who brought those are from Ontario and you can't just drive in from Canada these days. You have to fly in, instead, because ??? ??????? ?? ???? ??? ? ?????? ?. And there were far fewer people at the convention, with many fewer people holding panels or such. There was almost never a time when two panels were up against one another, although one of my panels on Sunday would be one of the exceptions.

So I wandered into the arcade room, figuring to put in some time on Earthshaker. And Vix was glad to see me, asking if I were comfortable taking the glass off a pinball machine. Well, sure. He asked me to watch over the game and if a ball got stuck, un-stick it. I was glad to take on that sort of responsibility and a little vague if he meant, like, watch for a half-hour while he got dinner or just come over watching all weekend if I could. As it happens I'd only ever open the glass once, on Sunday, when a ball got stuck in a weird place for

bunny_hugger and I'd try setting it on the flipper, only for closing the glass up again to temporarily kill power to the flippers, draining the ball.

When other people weren't playing, though, I stepped in. The game was in slightly rough shape; the plunger, for example, wouldn't send the ball all the way into play unless you gave the plunger a little extra push. And the most important shot in the game is to hit a side ramp. There's a scoop that's easy to hit, that's supposed to kick the ball out onto the side flipper to set up that shot. It was a little mis-aligned, kicking the ball out so there's no hitting the side ramp. But after a couple tries? I started finding the feel of the game. What to aim for besides the scoop so the ball came down the flipper the right way. When to hit that flipper to get the side ramp going. How to hit the less-valuable but much-easier and extremely safe center ramp. And between those, I put together a couple of solid games and then one outstanding game. By the end of the first night at Motor City Furry Con, I was the Grand Champion on Earthshaker. Also thinking how annoyed

bunny_hugger would be when she saw this.

She wouldn't see for a couple hours. Instead, one of the few events on Friday was one she wanted to get to: Quiplash. She's played this in Jackbox streams a good bit and was interested to see the furry version. She even played in a couple rounds, including a killer first round in which both of the questions she got rated a Quiplash. This means that her joke was so good that all the other players agreed it was the better of the two jokes. A lot of the audience did too. After that absolute killer of a first round she dropped back to merely good, though. The weakness there is that furries, being basically nerds, will tend to vote for the raunchiest answer whether or not it's the funniest. (And, must admit, much of the time they were voting for the funniest answer too. But there were a fair number of cases where it was the dirtier joke, or the one that was the running-joke answer, that got the vote instead.) I did try to join, myself, but for whatever reason my iPod wouldn't connect to the web site and so I stayed out. It's usually

bunny_hugger who has the inexplicable computer problems that keep stuff from working.

bunny_hugger to curse me out, it was getting near midnight. She had to leave for a half-hour or so, to take her daily walk, a habit she's kept up despite everything gone on since last March. My own walking has fallen off due to soreness in my right foot. Yes, I'm worried about it too. So while she walked around the hotel grounds --- finding the golf course path particularly haunted in part by tinny music on distant speakers --- I got into my Stitch's Girlfriend Angel kigurumi and joined the dance floor. Maybe not wisely: my foot did not like most dance-type motions. One of the rare ones that was okay was following this chain of people slithering through the dance floor now and then, at the instigation of someone who gave us congratulatory elbow-taps as he was leaving. That's something odd enough that

bunny_hugger asked me what that was all about and I couldn't think how to explain that there was this ... like ... fake conga line thing, and I was a good participant in it.

She finally joined the dance, though, in her Stitch kigurumi, and danced her tail off, which we found on the floor and picked up. She had an emergency sewing kit with her luggage, of course, but she decided it's something better dealt with at home, at our leisure, and who's had time to fix something like that yet? Well, we can hope.

We stuck with the dance to its end, when they played Toto's ``Africa'', and went back to our room, to sleep.

Early this month, despite my bum foot, I took a walk down to where they tore the bridge out to see what progress it's making. And I found an abundance of surprises. 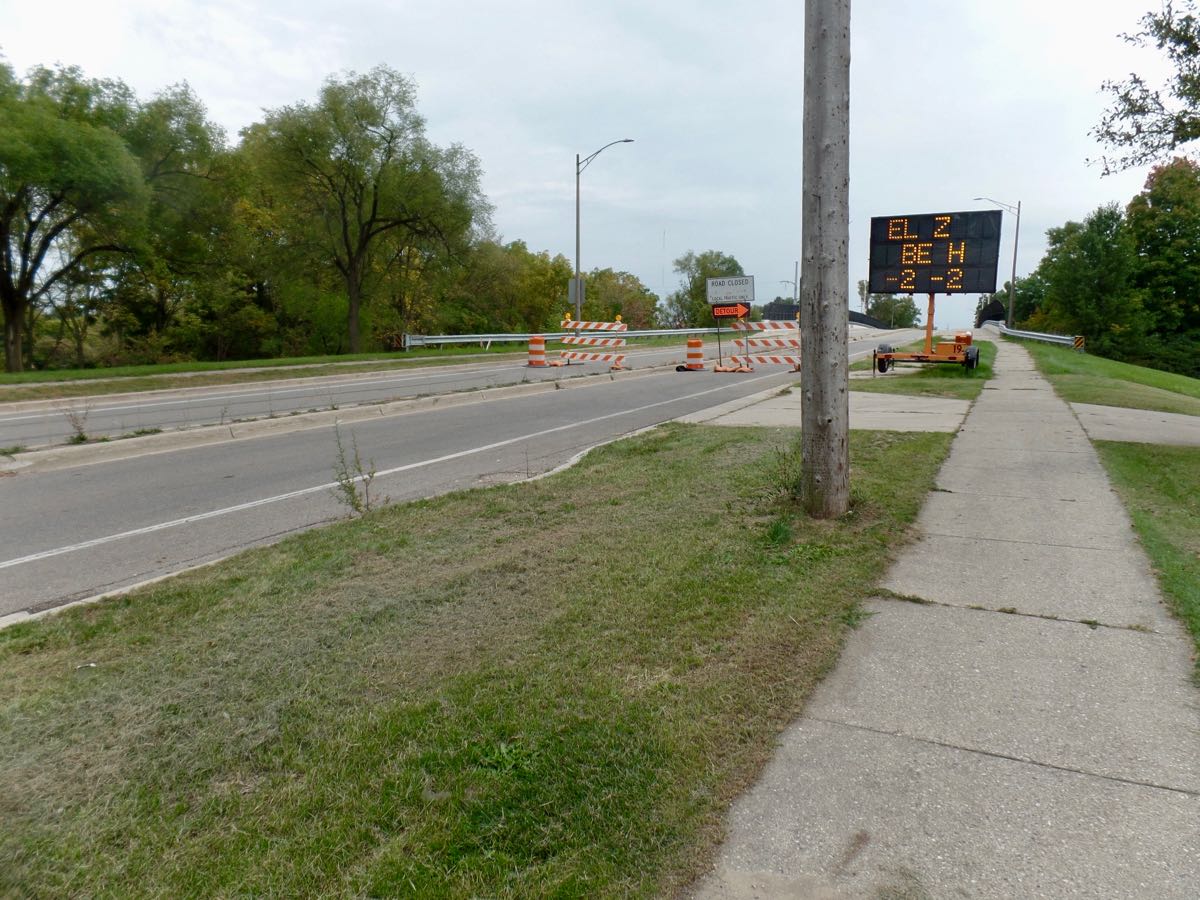 Surprise! I hope you weren't figuring to El Z anytime near -2 -2. They'd shut down the road rather a bit earlier than ever before, because ... 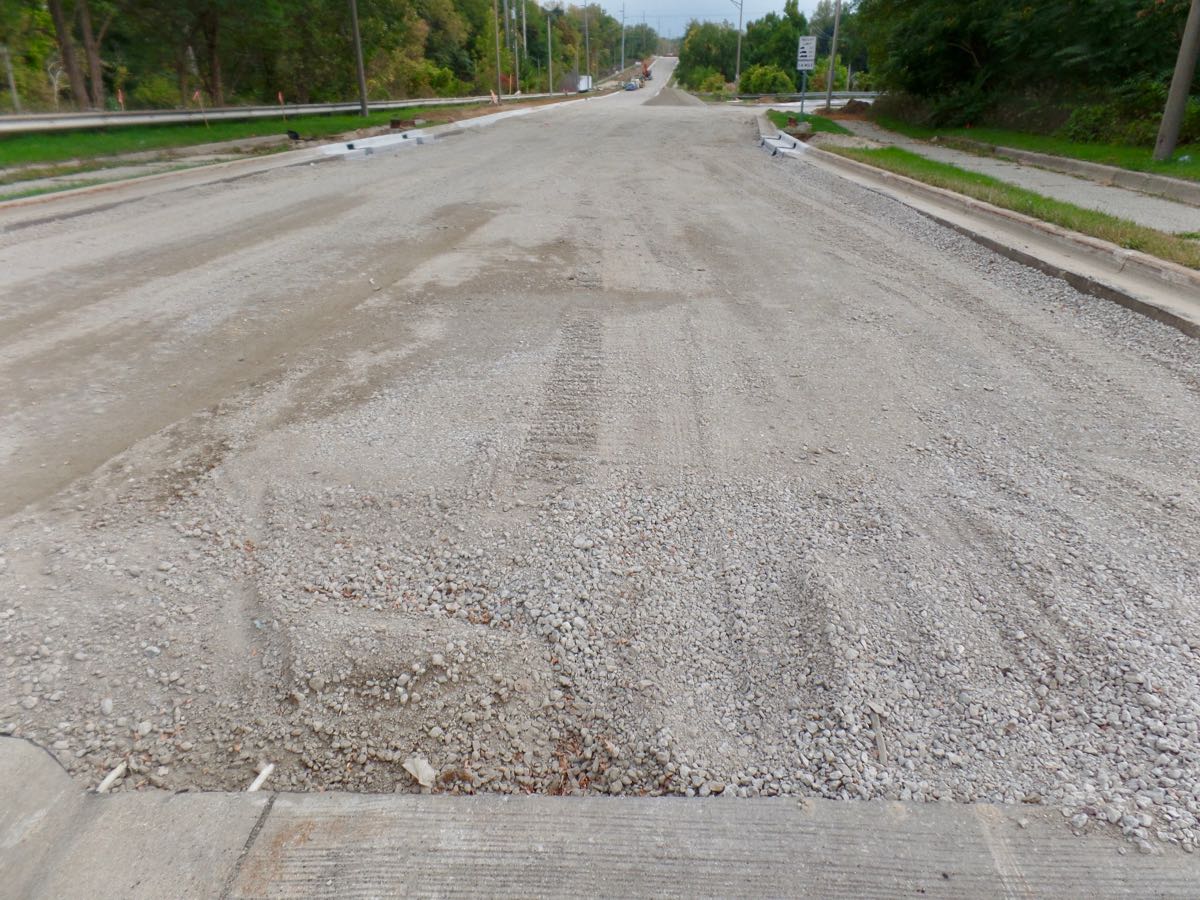 Turns out they tore up the road where it branches off onto Malcolm X Street! Didn't know they were repaving this far out although, really, the road needed it. 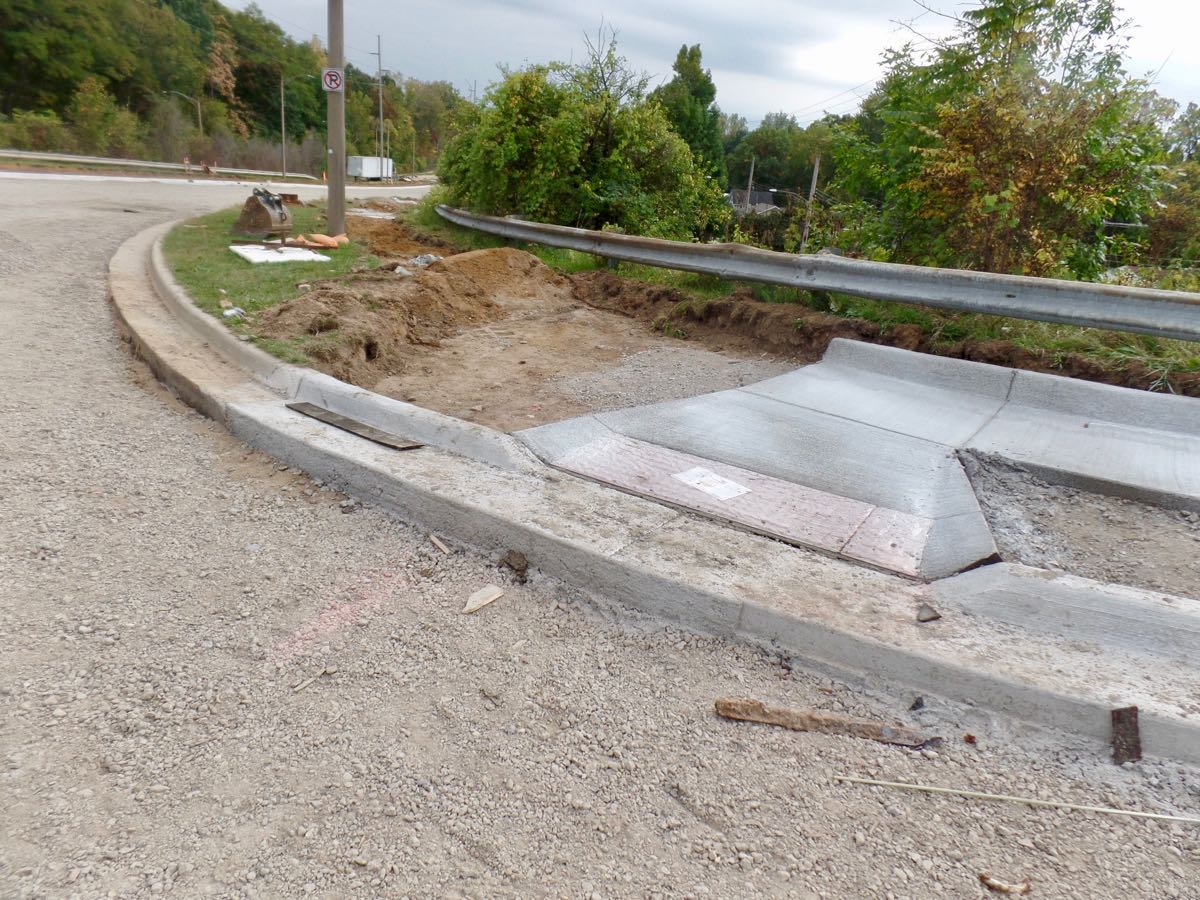 So here's a curb-cut sidewalk put in before the roadbed is. They haven't even taken the plastic off the little bumpy sidewalk thing! Also they took out a lot of sidewalk, too. 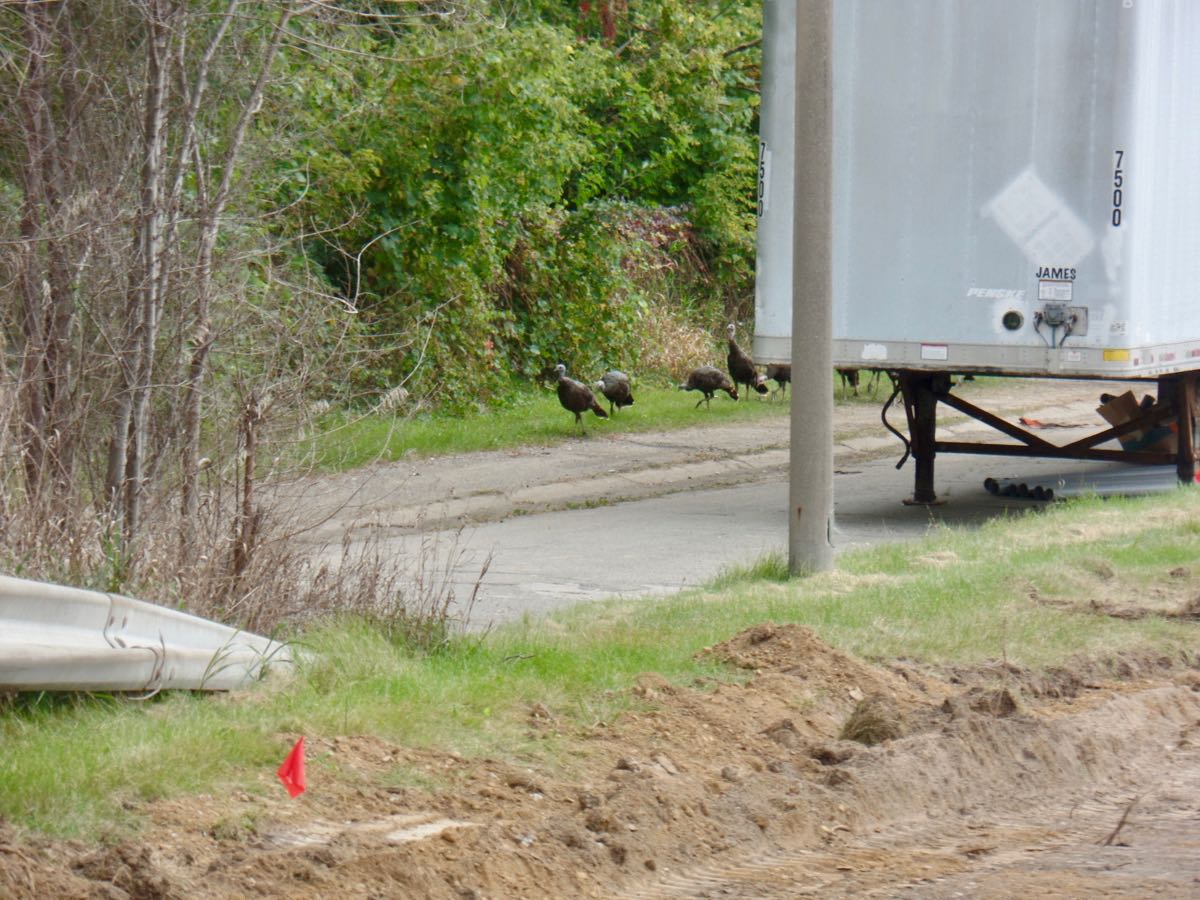 And ... what's this? My journey to the edge of the road got stopped by a flock of turkeys who were more interesting. 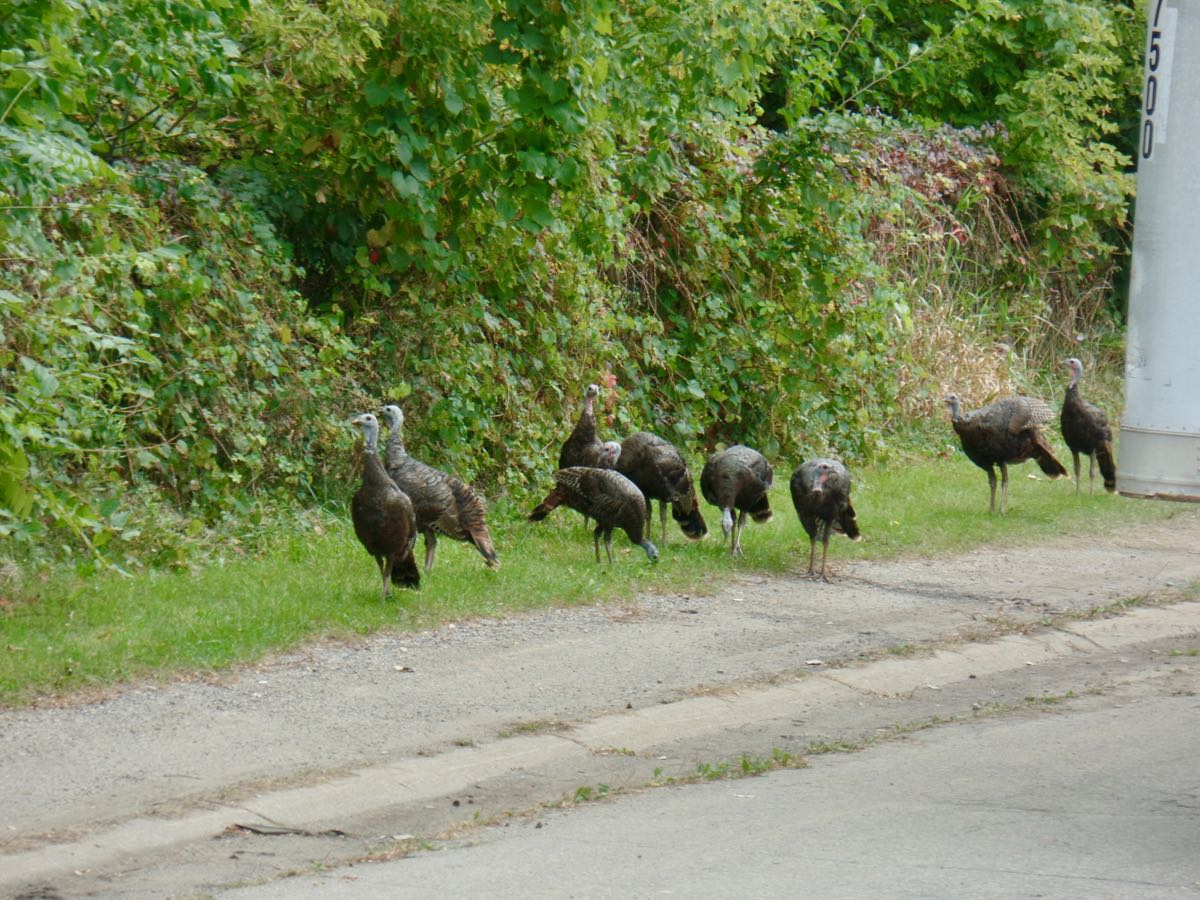 I made out nine turkey hens strolling up the side of the road, the part that feeds from Aurelius heading north onto Malcolm X Street. 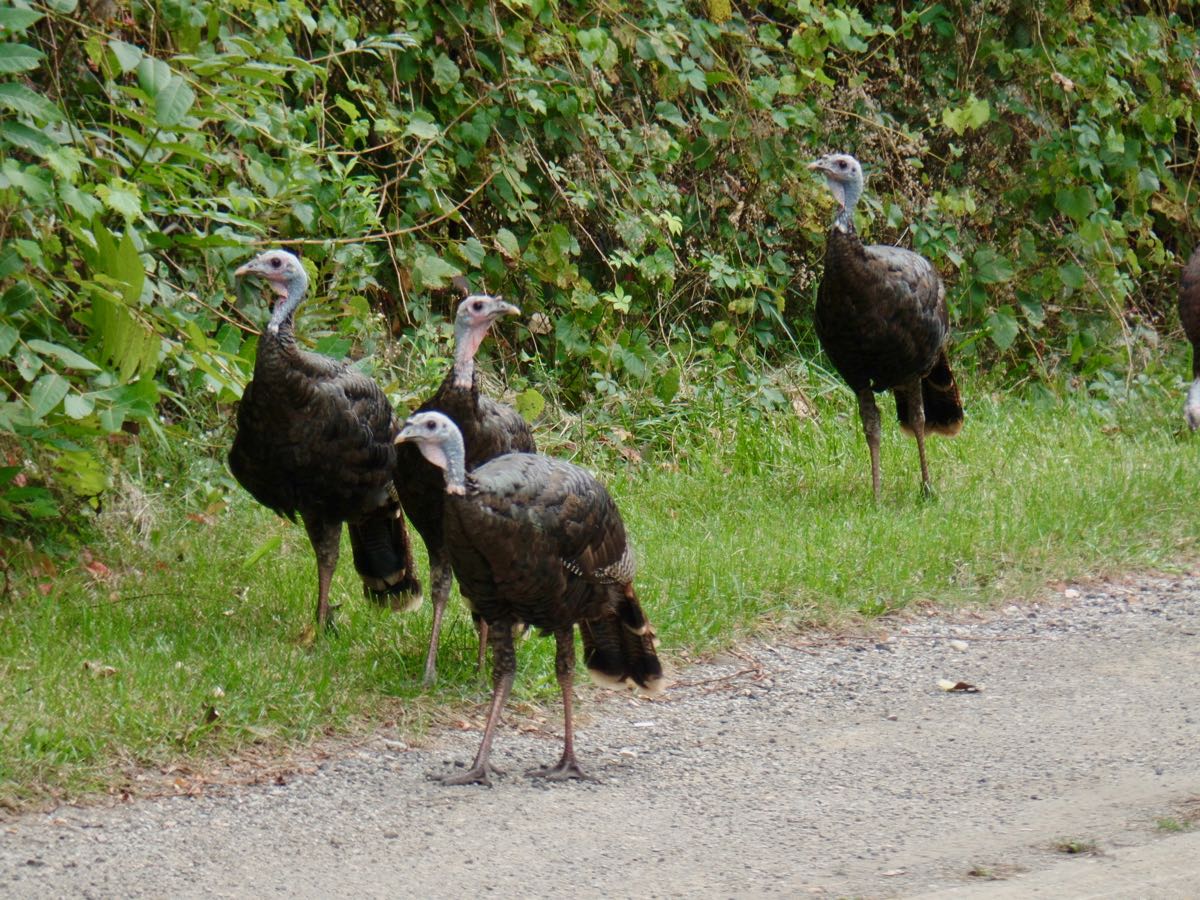 It's times like this I'm glad I got a 21x optical zoom: none of these turkeys were anywhere near enough to peck me to death.

Trivia: The author John Fenimore Cooper married Susan Delancey in the Delancey home, named Heathcoate Hill, on the Boston Post Road. in Mamaroneck, New York The building would (after being moved) go on to become a tavern, then a restaurant, and then a gas station. Source: The Old Post Road: The Story of the Boston Post Road, Stewart H Holbrook. I can't figure out of the building still exists, which I suppose is evidence it does not, but here's a slightly hand-wringy article from The New York Times in 1972 about its history and dim prospects for historical preservation.

PS: My Little 2021 Mathematics A-to-Z: Hyperbola and I'm over one-quarter through this year's glossary project already! I can't believe it either.