Saturday at Motor City Fur[ry] Con promised to be the big day, the most important one. The one we might have done as a day trip if we decided not to brave the full weekend. Its start, of course, was the fursuit parade. Where it would start was obvious, the main events ballroom. Where it would go was a mystery not at all clarified by staff announcements as the marching house began. And there was no map; even years when there's a con booklet, they often don't have the parade route listed. I suspect they were still figuring out the parade route until the march started. I figured to wait outside the main ballroom, so I could get pictures with the light behind my shoulder, and then they went and declared the parade would go out the other door, down the other way. And then the other, other way (or ``original way'') again. That last was correct and I found a little corner where the hallway turned a 45 degree angle where the light was pretty uniform. And someone next to me was talking with every single marcher.

The parade was not the smoothest they'd have. The path had a good number of turns in it and, most lethally, went down a long stairwell --- with a landing and turnaround --- go to outside. The line kept coming to a stop, aided by the number of people who have to do some schtick with everyone among the watchers, and by the turns through the new hotel's layout. They needed more minders waving people at every turn. Also some substitute for the stairs.

bunny_hugger was not happy with the stairs especially. It led outside, to what looks like the room where they hold wedding receptions and all. It was a bright, sunny day, warm in the ways the springtime conventions never are, and it got me wondering if the convention was going to move permanently to October. Also whether Michigan will ever have a normal October again: we're facing our first frost warning this weekend, a month later than average. Yes, sometimes you just have a warm season, but you don't want them all to be warm for five years straight.

bunny_hugger wanted to do a bit of walking around in suit --- it would be her one significant suiting time all con --- although she was caught in doubts about her work. Thing is she keeps to the old-fashioned convention where she doesn't talk while in suit, and relies on my barely competent abilities to convey what she needs to discuss. And that's fallen by the wayside as more extroverts get fursuits, and get suits with movable jaws or don't care about the mouths not moving. I don't think it's as strange as she thinks, but she does run into people who talk to her and expect spoken answers.

One of them was in the arcade. She couldn't resist the chance to play Earthshaker in suit --- I couldn't either, if I had a suit --- and she put up a fairly good game considering she could see a coin-size spot on the playfield, blurrily. And she got a little conversation with someone else who was a pinball player and was delighted to hear about stuff like there being pinball leagues. I tried to keep the focus on

bunny_hugger but he ended up talking with me, instead. So it goes.

So, lunch. Motor City Furry Con traditionally offered sponsors a basic set of meals in con suite, sometimes even having things that vegetarians could eat. This year they apologized that they weren't able to provide meals for all sponsors. Except that they would be able to give every sponsor one meal, and part of the registration packet was a coupon for one of several possible meals, only one of them vegetarian. We saved the coupons for now, ultimately using them for dinner of two 'slices' --- two quarters --- of a small pizza that we kind of liked for its industrial food vibe. It wasn't quite the pizza I got Fridays in elementary school, but it had that same feel. But instead we figured to go out and get fast food somewhere, which was the Subway in the very large strip mall opposite the road from the hotel. That was fine, although they didn't have my preferred sandwich (egg and cheese), and we weren't even sure they had veggie hoagies as those were listed on the 'local favorites' menu hidden to the side. Also they had the door set to play the Westminster Chimes every time it opened, which has to have driven them mad, right?

Back to our hotel room to eat. And for

bunny_hugger to curse out the course web site not working, and to curse herself out for not having got all this done sooner, and the instructor for not being clearer about what to do. She would stay behind, trying her best to study and using a little window of the course web site working to take a practice exam. On that practice exam she did ... not great ... but she had to leave before reviewing it. After that she learned she couldn't go back to see her finished exam. We have no idea whether that's because of the course site's issues, or if the system's designed so you can't look back at practice exams. But of the many things this course did to destroy her ability to feel happiness that weekend, this was one of them.

Meanwhile, I had stuff to do. 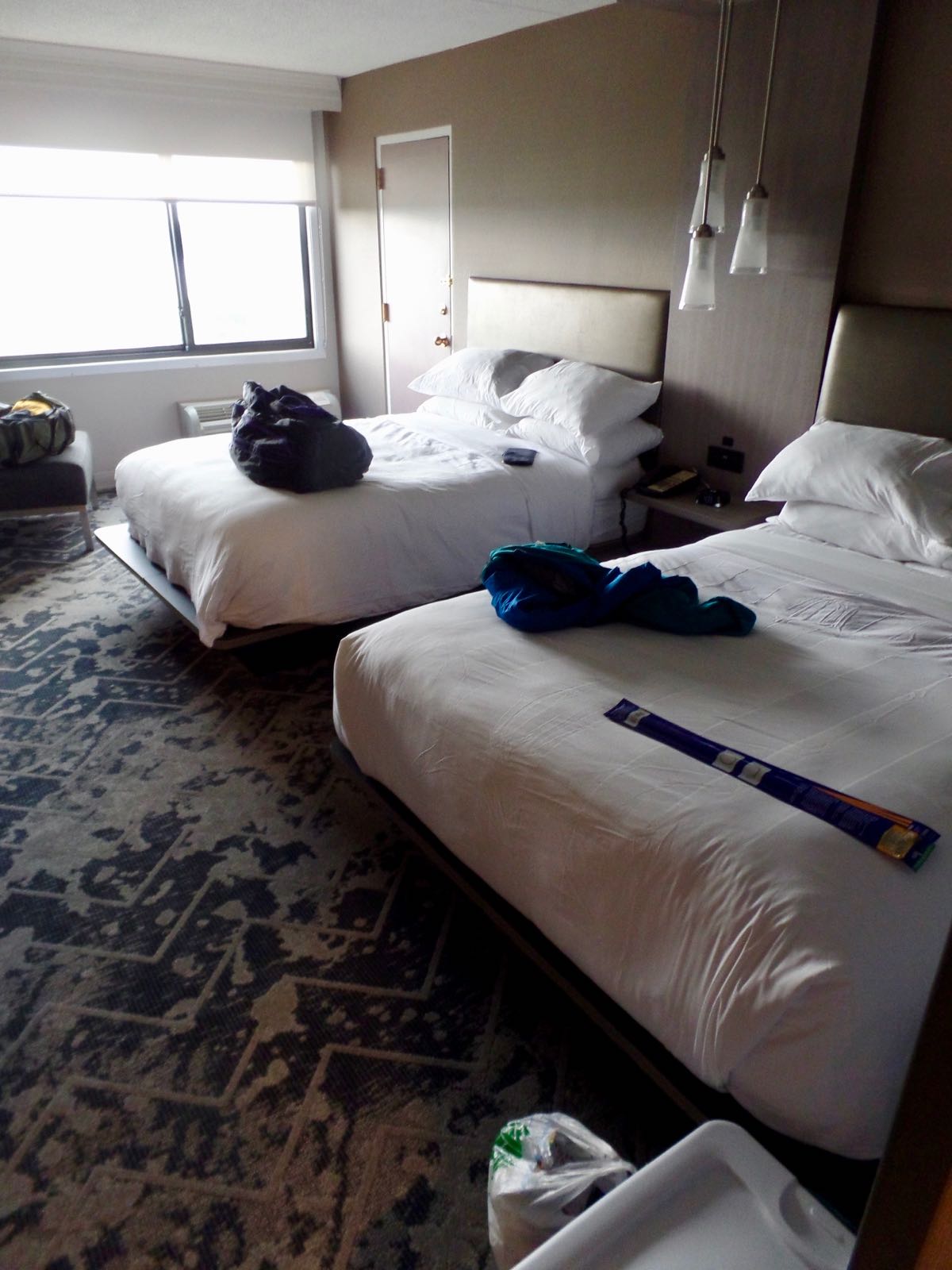 Our first hotel room since January 2020. Looks all normal, doesn't it? Note the door to the next room, where everybody was very loud for no obvious reason. 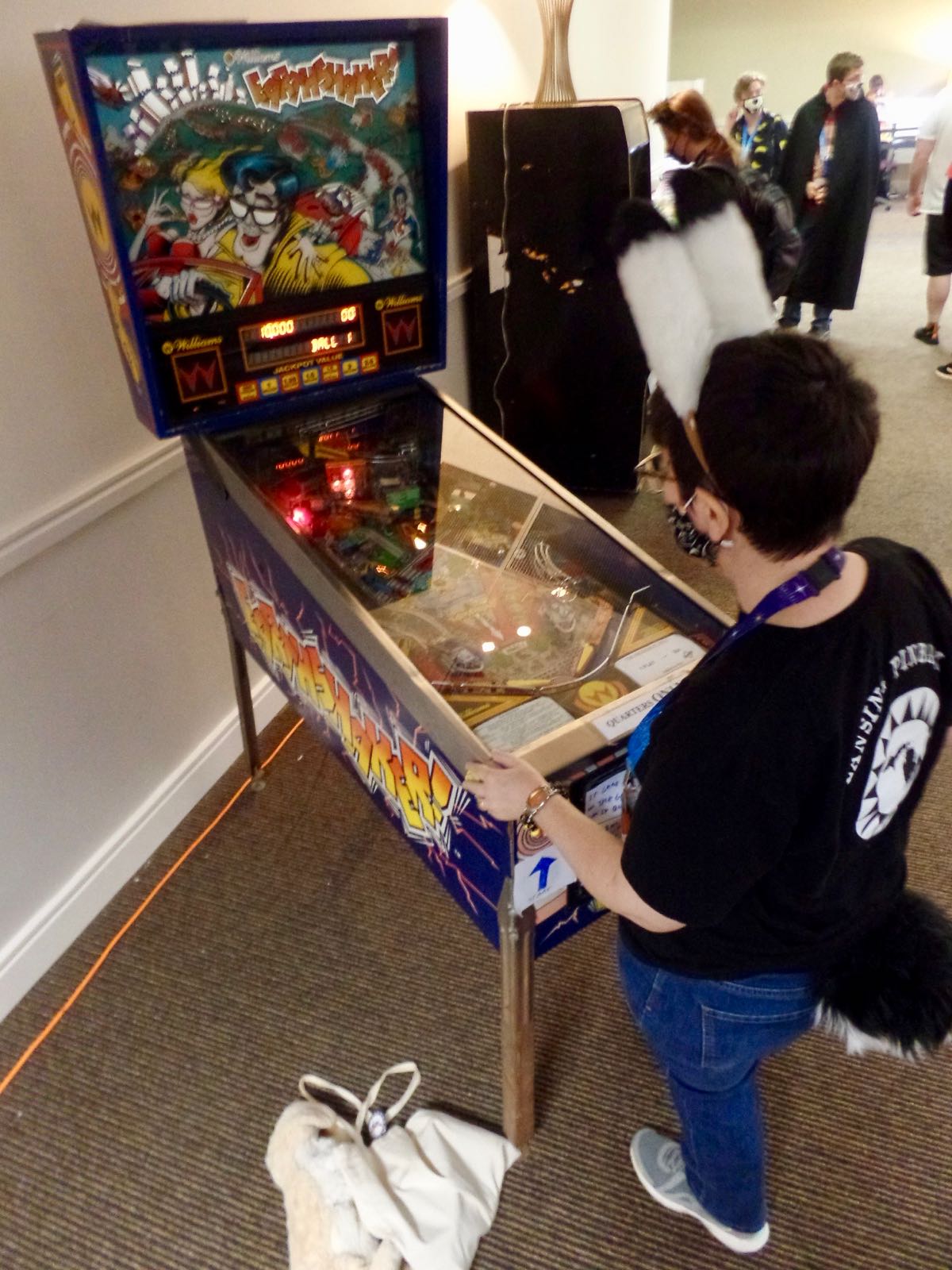 bunny_hugger starts her quest to get on the high score table of Earthshaker. 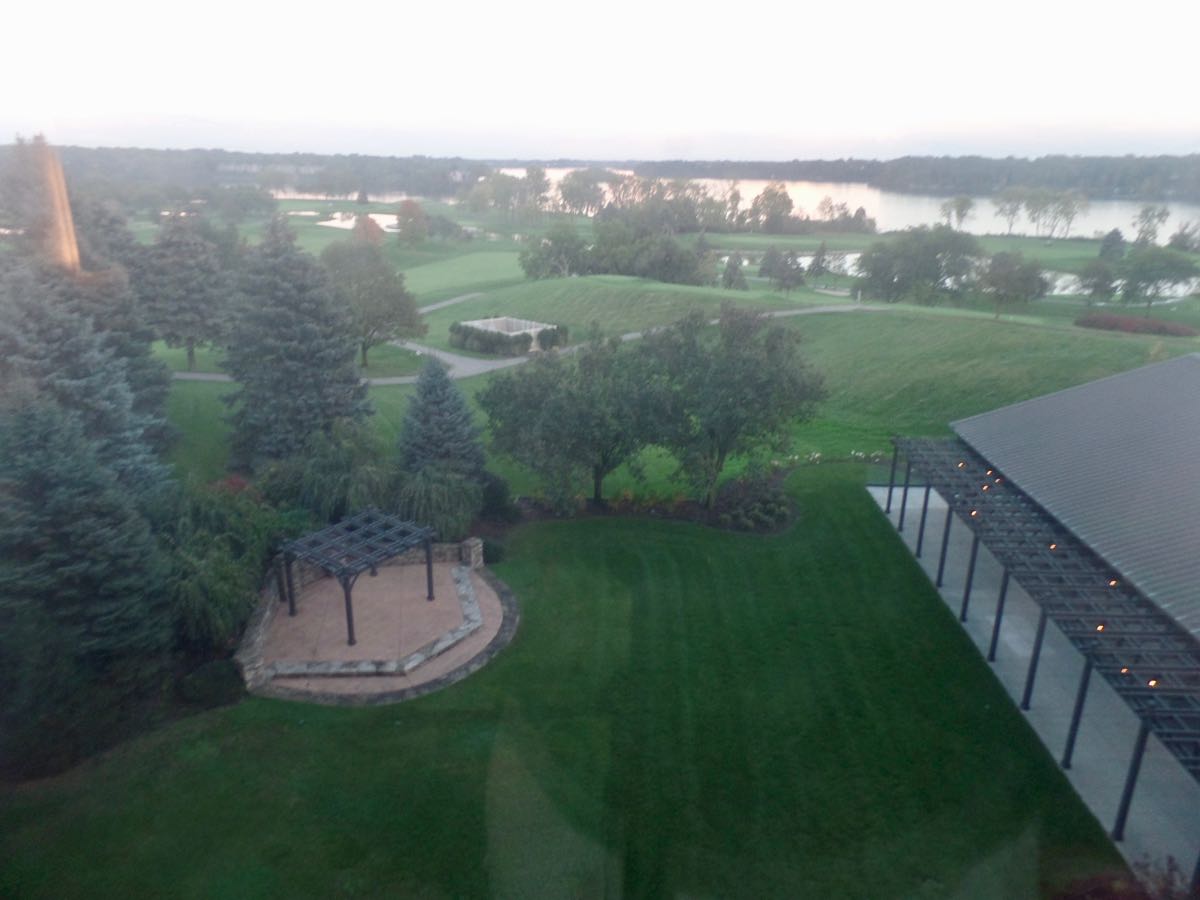 The view outside our room. In the distance is Ford Lake, a body of water named for getting across a body of water. The building at lower right is where they held the group photo after the fursuit parade. 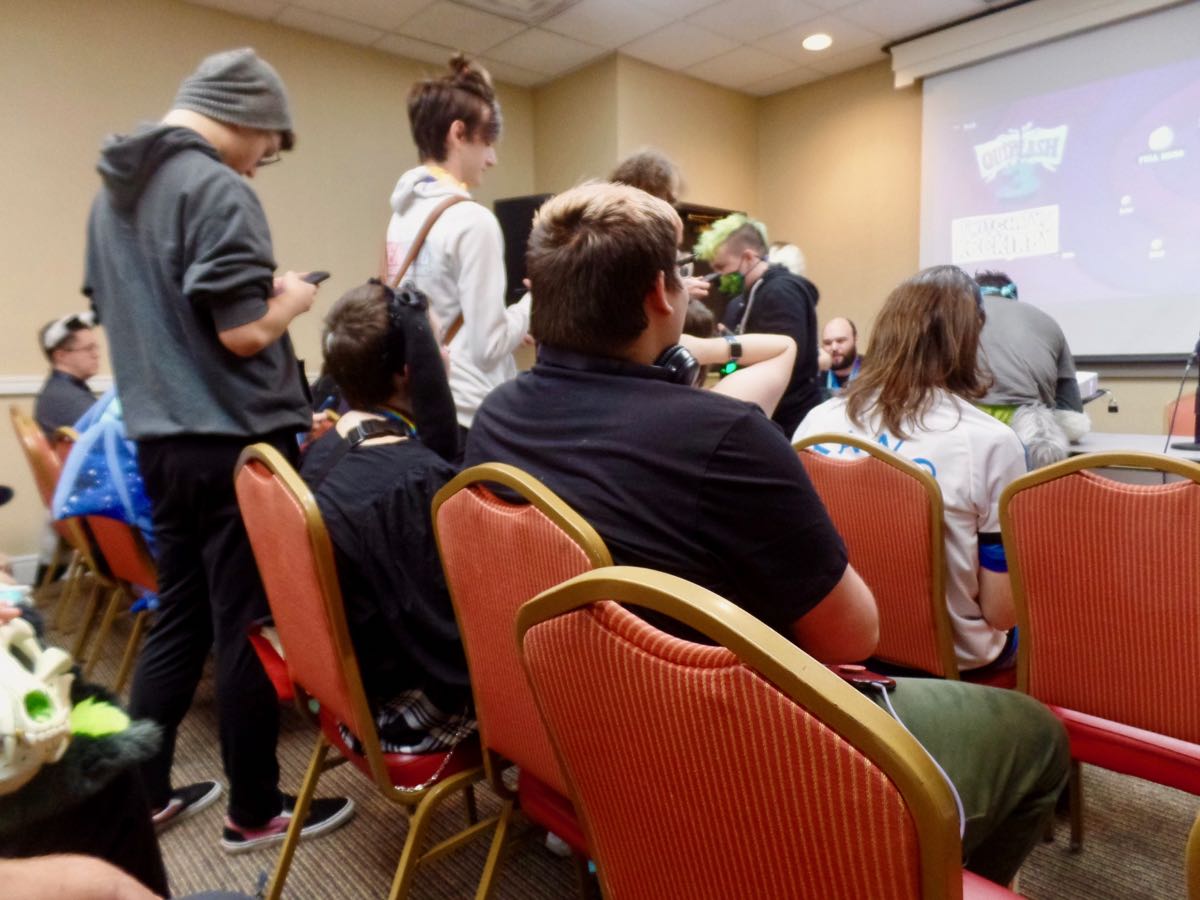 The Quiplash room, which was more crowded than I thought we were doing these days and where I had to keep reminding myself, everyone here's shown proof of vaccination. 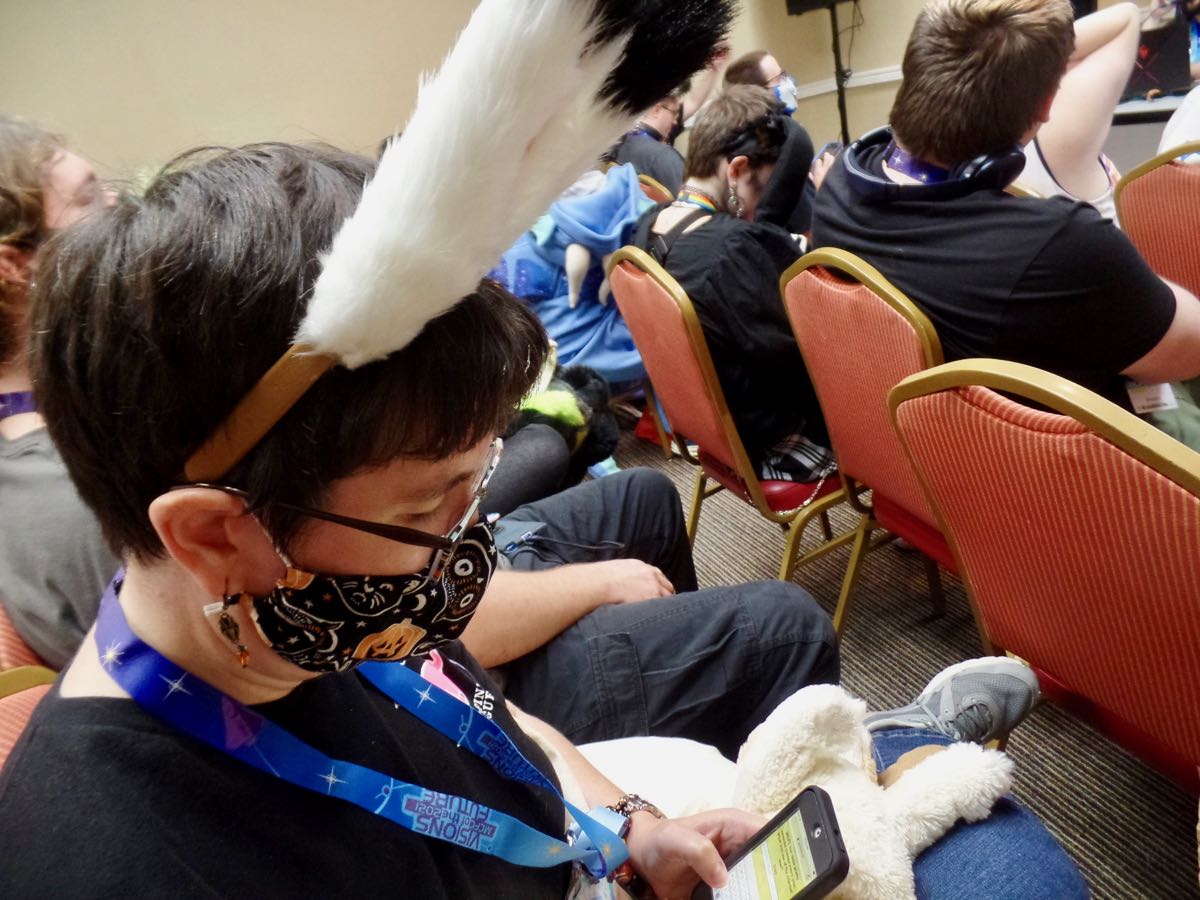 bunny_hugger playing a round of Quiplash. She and I stayed masked when outside our room. 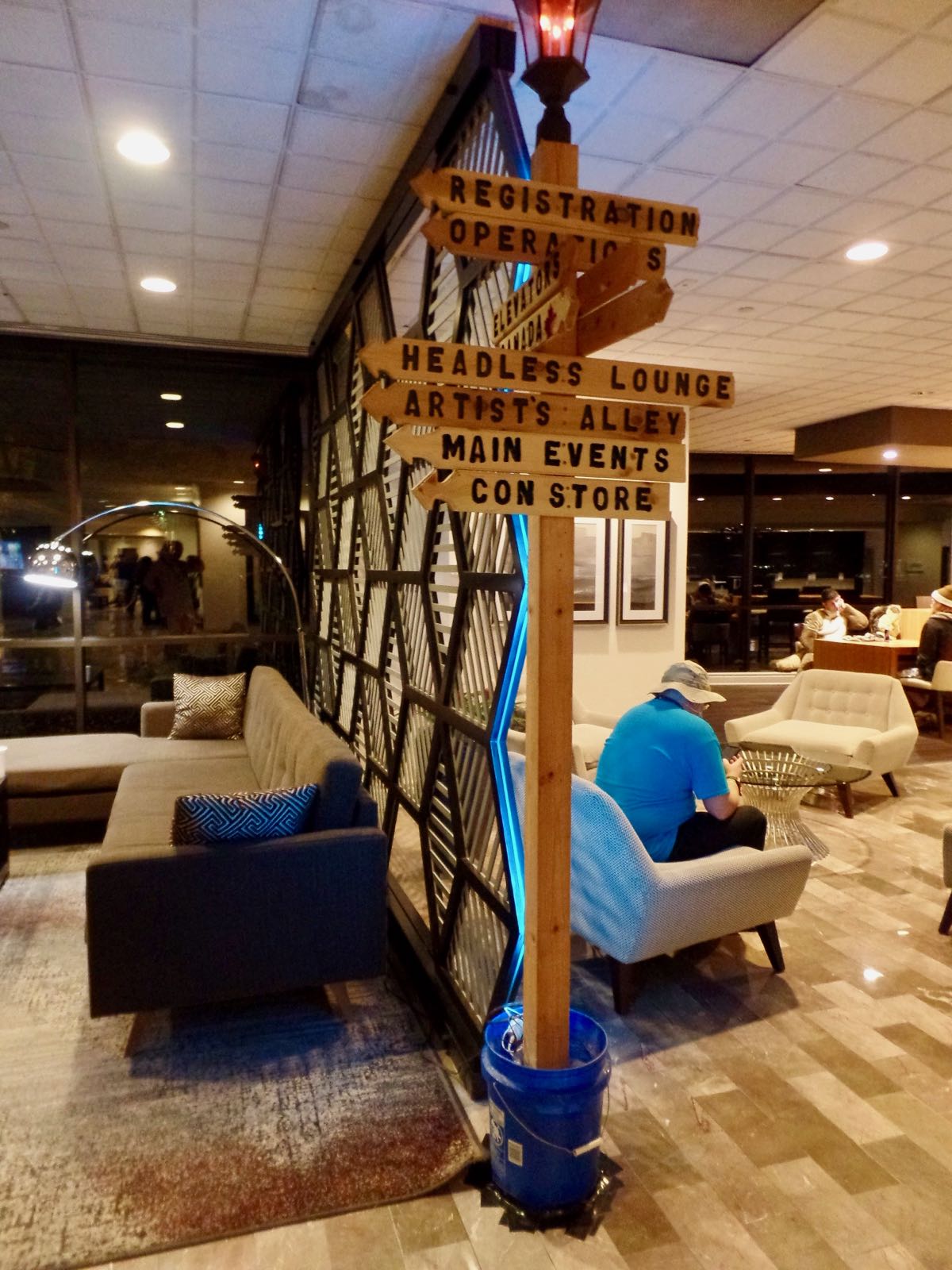 Wandering around the convention. They had the old direction signs, as used from the old hotel and possibly as far back as Furry Connection North days.

Trivia: The Igorotte village, a display of Philippine persons at Coney Island in 1905, cost 24 cents to see, the highest fee charged for any Luna Park attractions that summer. Source: The Lost Tribe of Coney Island: Headhunters, Luna Park, and the Man Who Pulled Off the Spectacle of the Century, Claire Prentice.