bunny_hugger saw in the dealers den was a kigurumi. A real one, a spectacular one. A Cerberus. With three heads, two of them snapping to the side of her head so you can go around as a very cute three-headed guardian of the underworld. She bought it, pausing almost long enough to get the money out of her wallet.

She could barely wait to put it on, but she did, partly for another round at Earthshaker where she couldn't break past 3,000,000 points. The high score was no longer my 8.2 million, to my irritation, but it was a barely higher 8.5 million. If either of us could get a good game in, we could take that, but the game was playing even rougher than before. The ball couldn't be plunged into play; you had to hit the plunger, and good luck getting the skill shot. The kickout from the scoop was even rougher than before. The game was playing like my knees feel.

She also waited through Closing Ceremonies, the only big general event we got to if you don't count the dances. It offered the sad confirmation that there would not be a Dead Dog Dance, as they had to get the space disassembled too quickly for that. It also revealed that the convention had 1,172 attendees, down about a quarter from 2019 but still pretty packed, considering. It's a about than the attendance the convention had in 2016. The amount raised for the charity, a Detroit bee support agency, was over $12,500. That's down about a fifth from 2019, but it's about what they raised in 2018 at least.

It also brought the discoveries that the convention was staying at this hotel, which I feel fairly good about. It's pretty easy to get to and it's easy to find the White Castle from there. And, if the pandemic recedes, it's easy to get to Pinball Pete's Ann Arbor as a side trip. Also a surprise: they figure to have the 2022 convention in March, the traditional time. It's daft to do the full turnaround for a convention in five months. I'm relieved not to be staff.

The close of the convention always comes before we know it, and and with our late arrival, and all the time sucked up by the course web site, and the lack of the Dead Dog Dance, it felt even shorter than ever. The sponsor suite would be open until 2 am, although the food would soon go away. The arcade room would be open until 8 pm, or, about two and a half more hours.

bunny_hugger now, finally, took the chance to get her Cerberus kigurumi on. She changed in the hotel bathroom; in the walk from there to my car to stash her clothes and back, she got three people talking about how awesome this suit was. It looks to be the chicken purse of kigurumis.

We went to the con suite, to eat bagged chips and have some beer. Also to pick up a Drunken Pumpkin. This was another charity event done over the weekend, with people buying small pumpkins and decorating them with markers. No carving.

bunny_hugger had done one, and she wanted to take it home with her. No idea how many people took pumpkins at all, but her drunken pumpkin is as I write this sitting in the front yard, helping stabilize one of the styrofoam 'gravestones' decorating the lawn.

And with the last hour of arcade time, we went back for one last attempt at

bunny_hugger getting her name on the Earthshaker high score table. She kept to her usual good-but-not-great games, including one that was starting to go all right and lost momentum when the ball came to a halt on the center ramp. (At one point during Sunday I had legitimate reason to open the table and place the ball on her flippers, although when I tried to close the machine up again the flippers died momentarily and she lost the ball anyway.) I had a fair game and finally a lousy game, and she regretted her declaration that she would get on the high score table.

With about twenty minutes left in the arcade room's opening, I suggested she try just playing herself, uninterrupted by me. Just spend her time playing. And she did, and ... it started coming together. The game was playing rough. It had started shaky, and been beaten down by hours of continuous play for several days. I mentioned the plunger's problems. The flippers were weakening too, going slower, going weaker. The critical side ramp was a shot barely possible.

But she found it. She started to have the game she had needed. The ball got stuck some, on the center ramp, and needed nudging to move again. But she got an extra ball, she got multiball started several times, she got side ramp shots. At one point the game, desperately confused, put two balls into play when only one should have been, and she managed to keep both in play --- there's no guessing what happens when a game of that vintage has a spurious ball drain --- until one of them got locked or put in a scoop or somewhere safe like that. I forget just what.

The important thing is she broke past the six-million point barrier to get on the high score table. And kept going, with her game getting more confident and more relaxed as she internalized that she had her goal. She got a quick multiball lit, and I could see that if she just shot that one scoop, to start the quick multiball, she was all but certain to get the grand championship. And what a perfect closing to the weekend that would be, getting the choicest place on the high score table in the final quarter-hour of the room.

It wouldn't happen, I regret reporting. She couldn't find the scoop to start the quick multiball, and she drained her last ball just a little bit below the grand championship. Still, she had her name on the high score table. And beat my highest score of the weekend too. She had the triumph she wanted. And just a bit of tease that she might have gotten more.

She suggested I try myself, see if I could take back the Grand Championship. I didn't want to; we'd had enough good play, we could leave on such a high note.

We walked around the hotel, trying to find what activity remained. A handful of fursuiters were still around. People were impressed by the Cerberus. Most of what was left was the con suite and we saw the last bags of pretzels get taken.

bunny_hugger decided to take her daily walk, about a mile around the hotel, before we left for home. I did a modest bit of walking, inside the hotel, before finally admitting I wasn't seeing anyone or much of anything to do. So we drove for home, figuring that we'd stop at White Castle and eat on the way home.

This was foiled by it being after 10 pm on a Sunday. In these diminished pandemic conditions, that means it was closed.

bunny_hugger checked around with her not-smart-phone and concluded any fast food place we'd be likely to go was also closed. While it did feel good, and feel a relief, to get home, it was an anticlimax that I had to look around and find something easy to make for dinner.

We'd wanted to pick up Sunshine the next day, but

bunny_hugger, needing to do her practice test and then actual test, couldn't find the time for that. We went on Tuesday instead, also a cramped day as we had to get to Lansing pinball league for the early evening.

Let's get out of the hotel and see the aftermath of the parade and maybe of the group photo-taking. 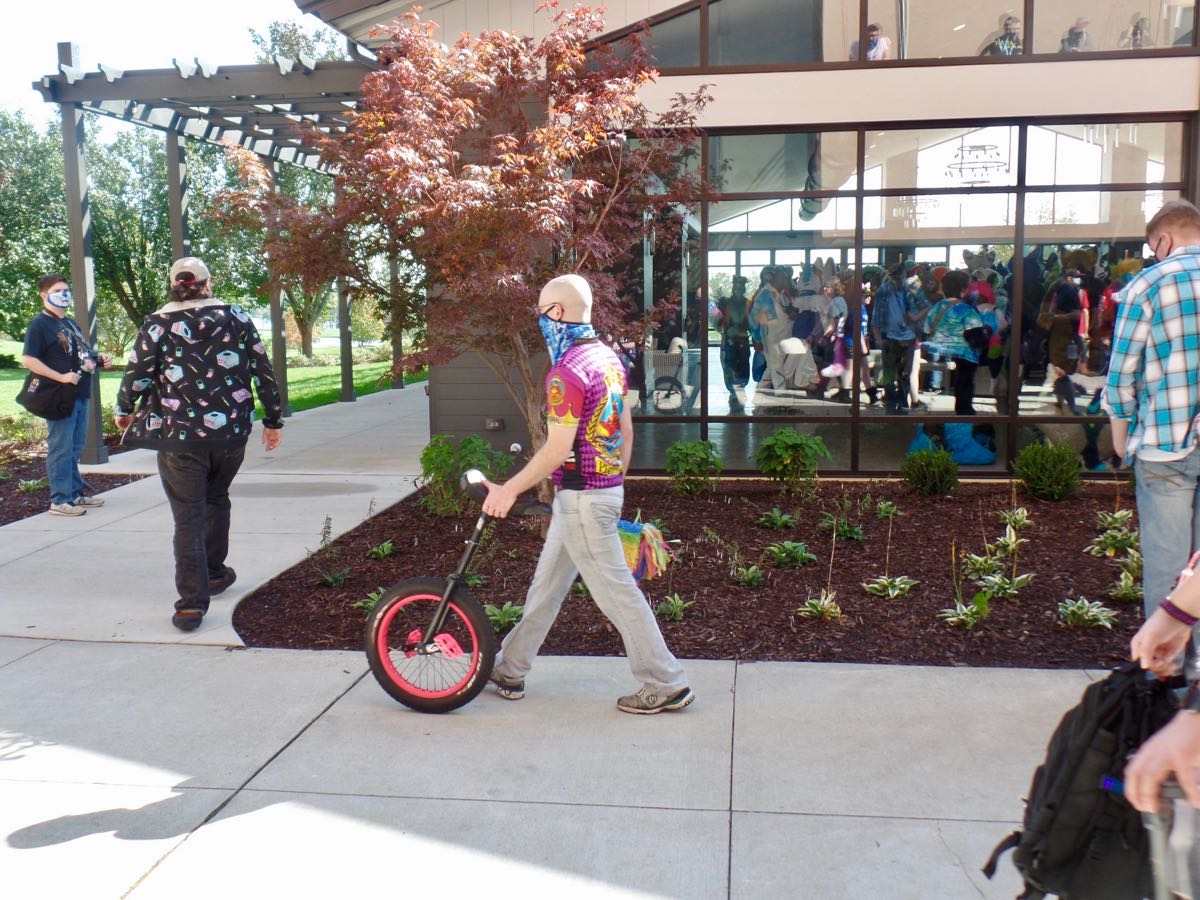 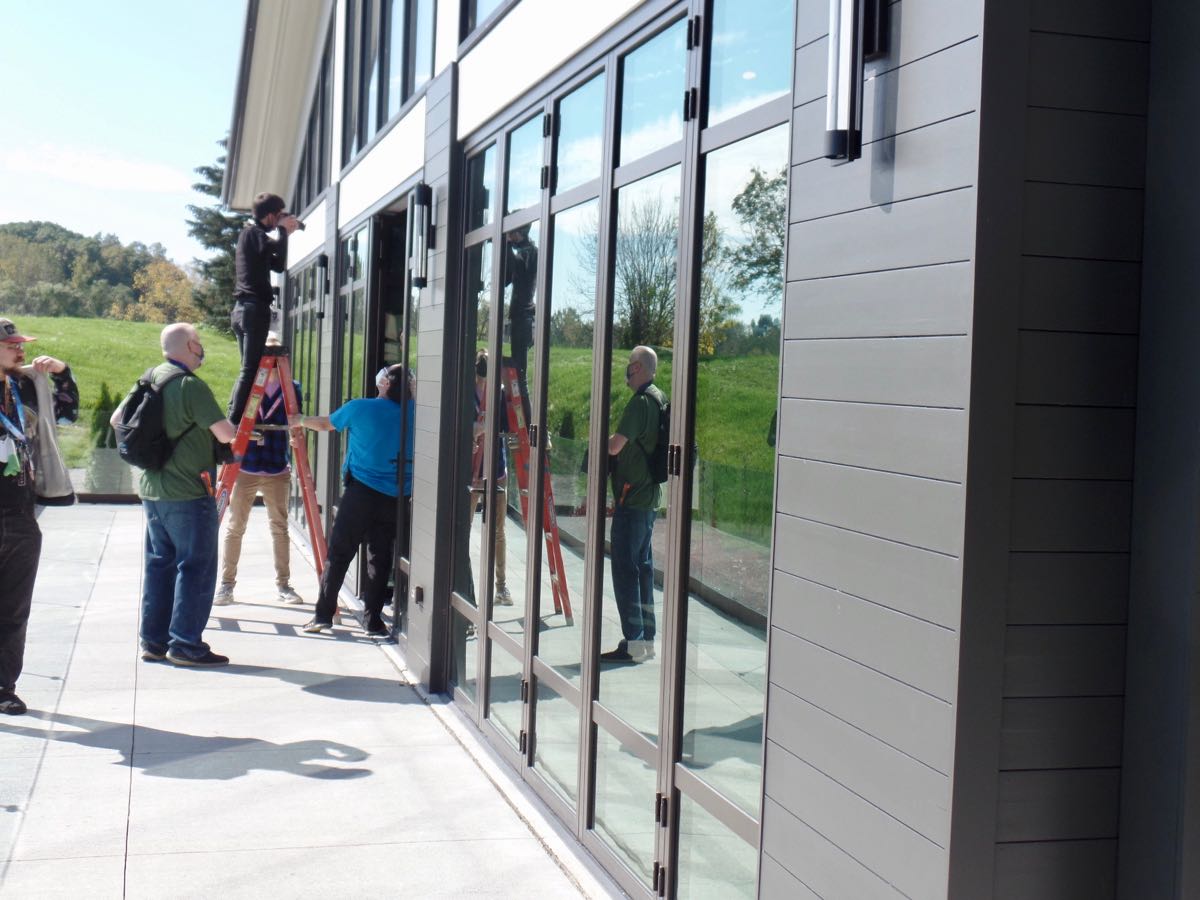 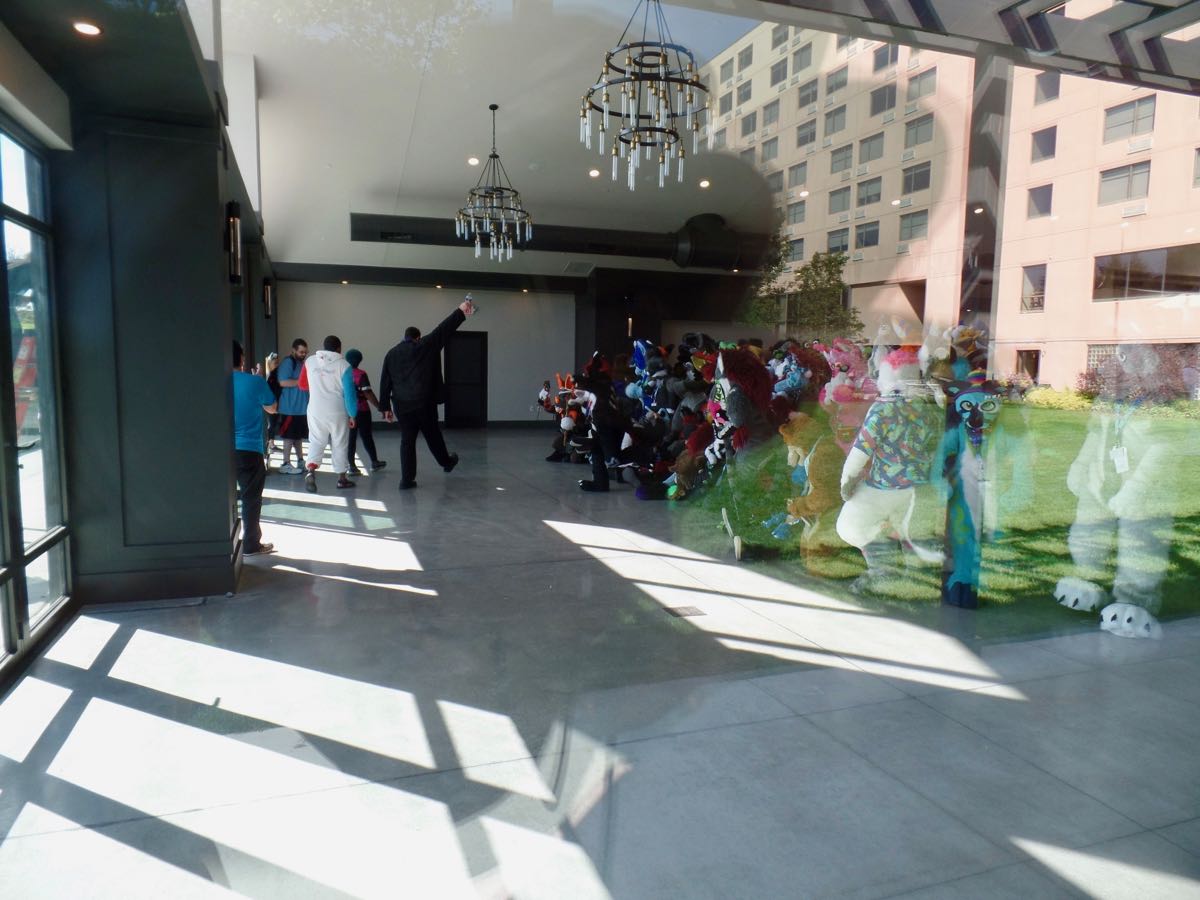 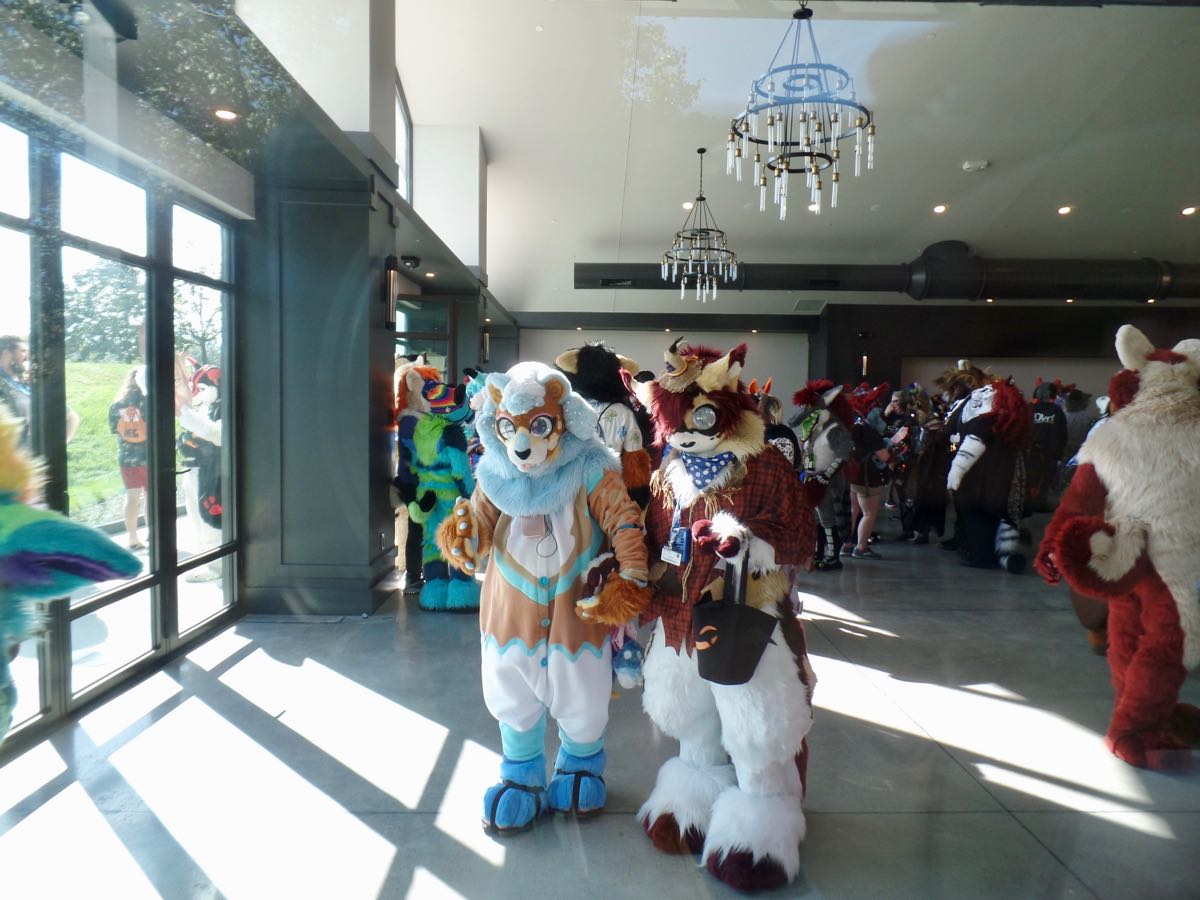 Group photo taken, things start to break up inside the wedding venue. People with almost no vision try to find which of the many panes of glass is a door. 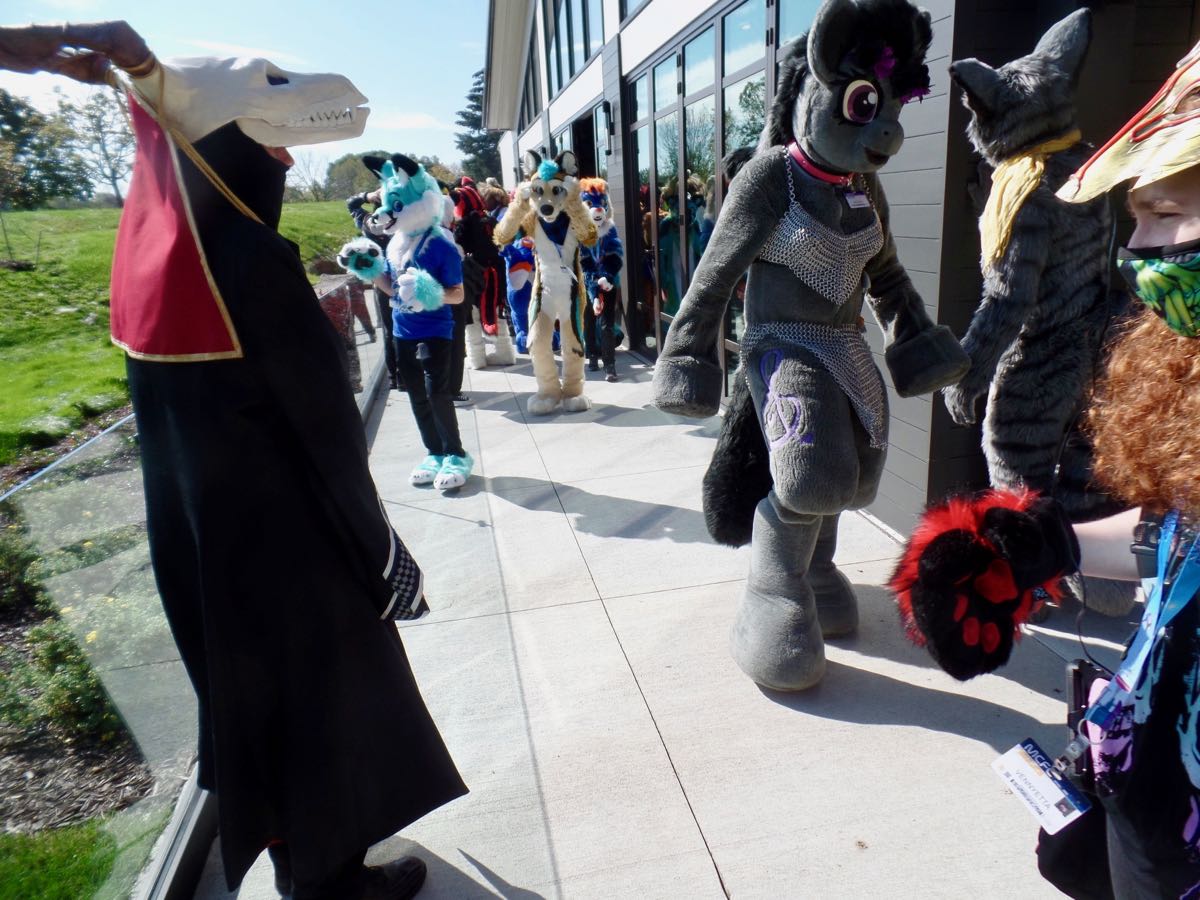 Fursuiters spilling out of the venue to go milling about. 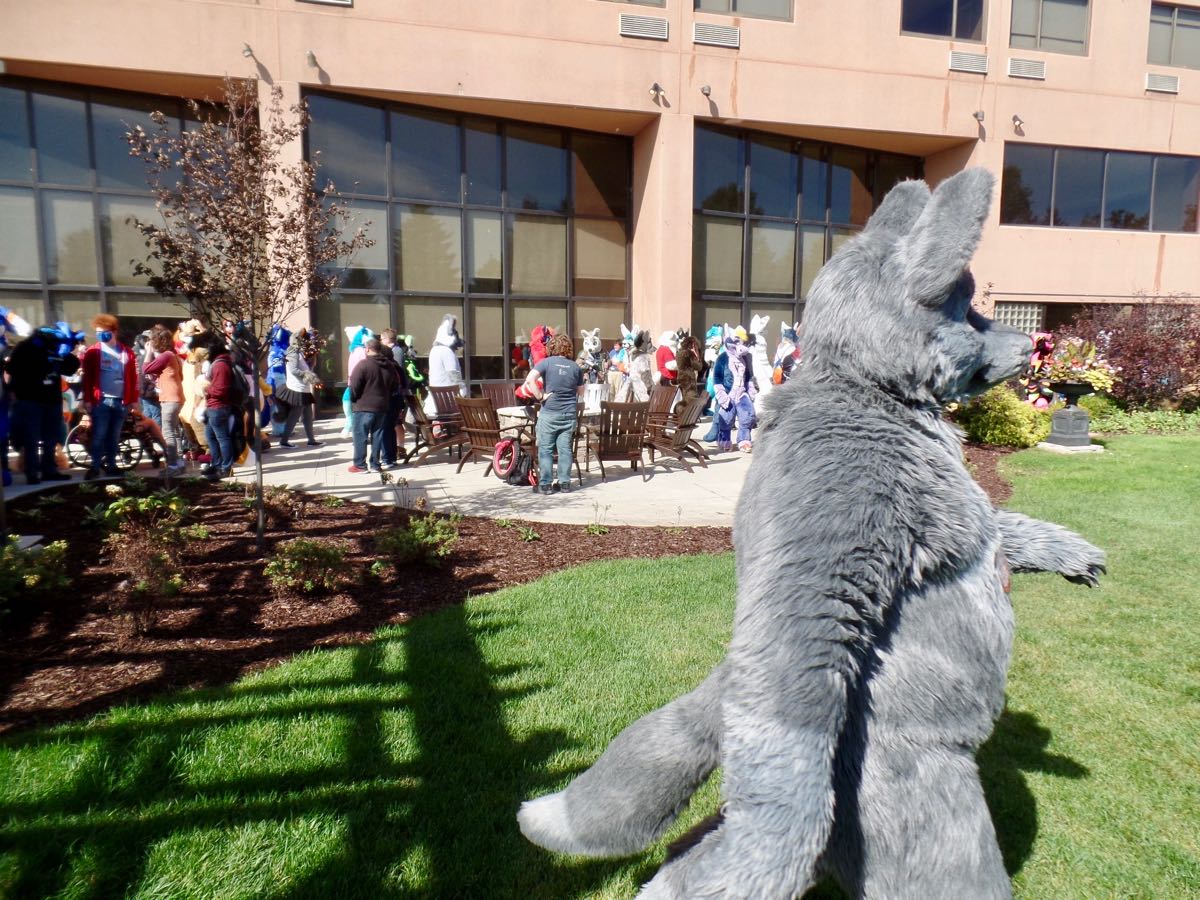 Most stayed on the sidewalk but a few brave souls marched across the grass.

Trivia: In May 1790 Auguste-Savinien Leblond was the first to propose the neologism ``metre'' for the new fundamental unit of length, describing it as ``a name so expressive that I would almost say it was French''. Source: The Measure of All Things: The Seven-Year Odyssey That Transformed The World, Ken Alder.