Last night was the first charity pinball tournament we've run since December 2019. Fear and Trembling is the autumn, pin-golf tournament. In pin-golf the the point is not playing for points, but rather to complete objectives. These are usually things you do while playing anyway, and suddenly it's impossible to do when you try. My longrunning joke has been that if the goal were ``drain your ball'' people couldn't. One objective that

bunny_hugger picked was almost literally that: collect an award that you light on the outlane, so you can only get it by draining a ball.

Few people tried for it. The --- unique, as far as we can tell --- thing in this tournament is that for each table you get two objectives, and have to choose one and only one. Accomplish the other objective and you get nothing. This draining one was brilliant, although I think we managed a pretty clever set of objectives for most of the games.

bunny_hugger used three pin-golf trophies that GRV had won at Michigan Pinball Expo, a now-ended series of tournaments, early in the decade. He'd donated them to reuse, and she had held off using them because they're flat things, not standing up on their own and not really mountable on anything. She did a bit of decorating, including attaching glitter-covered spiders on them, and scored her biggest hit in a long while; people loved looking at them, and the trophy-winners loved getting them. (Also a limitation: there were only three trophies while she likes to give to four finalists. The fourth, then, was a picture in a small frame, got from Michael's.)

bunny_hugger was greatly worried about how it would turn out. The long time since she's run a big tournament, for one. That she'd have to arrive late, although pin-golf is nearly indifferent to starting times. That we'd again require people to wear masks, something one person complained about on the league Facebook page several weeks ago and that's left her gunshy. And in the end ... well, there's one guy incapable of figuring out how to keep his mask over his nose. I spent a lot of the evening looking at him and tapping the bottom of my mask, to point out he should be wearing it higher than his chest, and he sometimes remembered and got it back up again. Irritatingly, he won the night, too, which feels like mockery.

Nevertheless, everything did go smoothly. No crises, no rulings needed. Not even any games breaking, although I did hear at one point the telltale noise of a game being opened up. I think RED was just dislodging a ball. Or possibly adding credits for himself and his group. Down side of a coin-drop tournament. And the big hit of the event was the tiebreaker game.

bunny_hugger brought her Flip Side miniature pinball game, and it was the designated tiebreaker game. Ties came up, too. There was a three-way tie for the last two positions in finals (MWS lost, on a house ball), and then a two-way tie for second-or-third. Everybody loved the game, which is surprisingly well-made and playable for a pinball machine not one foot tall. Several people asked if it was the grand prize for the tournament and, no; the thing is too expensive to be a prize for something like this. Anyone picking up the machine and discovering how well-made it is realized that.

There were a couple points where we were out of practice, and could have done more smoothly. For example, for a long while I sat at the directors' table waiting for people who had problems. I didn't have a copy of what the objectives were or how to accomplish them. These were put on signs taped to the pinball machines, so nobody at the machines should have a problem, but if I wanted to know I had to rely on my memory. Still, the first charity tournament at our hipster bar in 22 months all went right, apart from our not placing higher in it.

So Closing Ceremonies have finished, I can't have more than one, two pictures left of Motor City Furry Con 2021, right? ... Right? 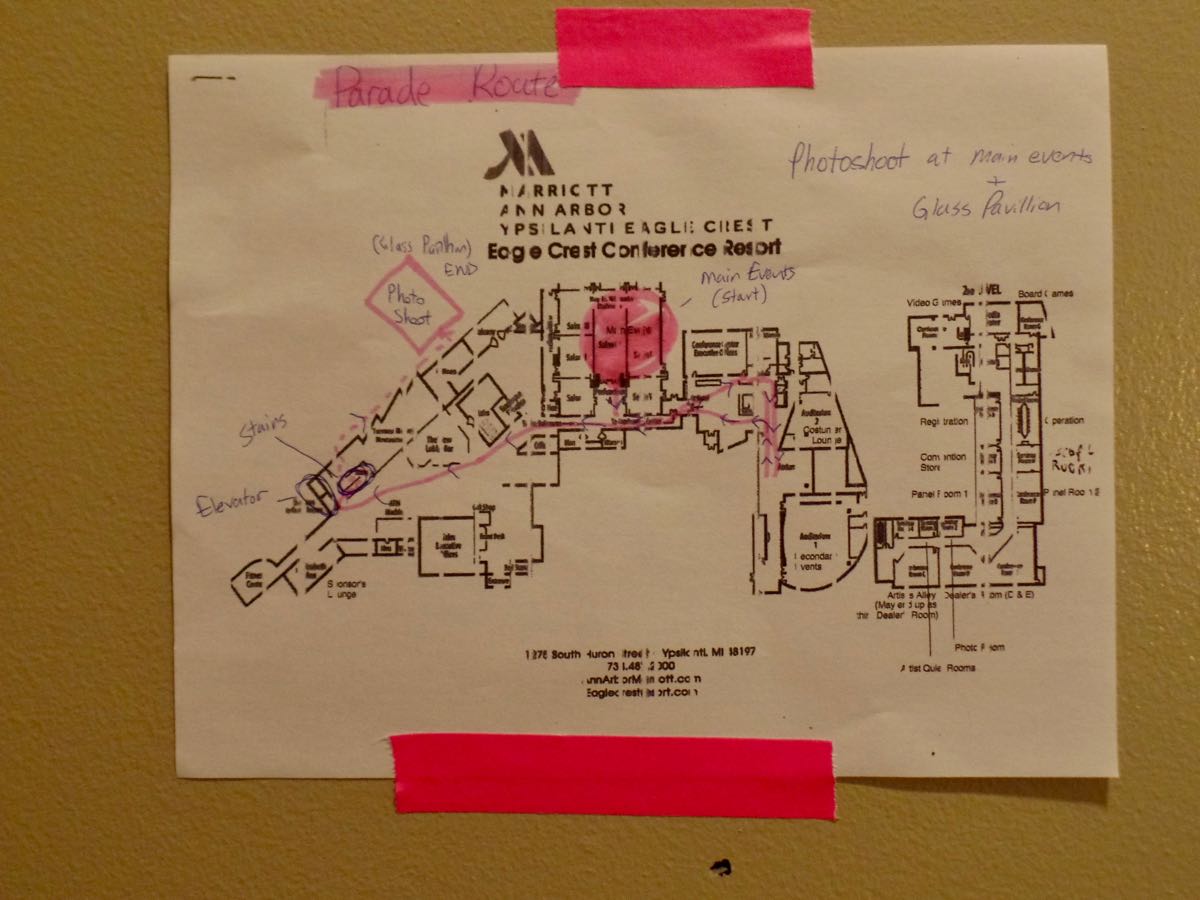 Oh, a map of the fursuit parade route! That would've been great to know before the parade started except that's not the path they followed anyway. (They didn't do the loop on the right, taking them down that little Tetris-S-block zig-zag and loop around the lobby to the right of Main Events, unless I missed a lot of activity.) 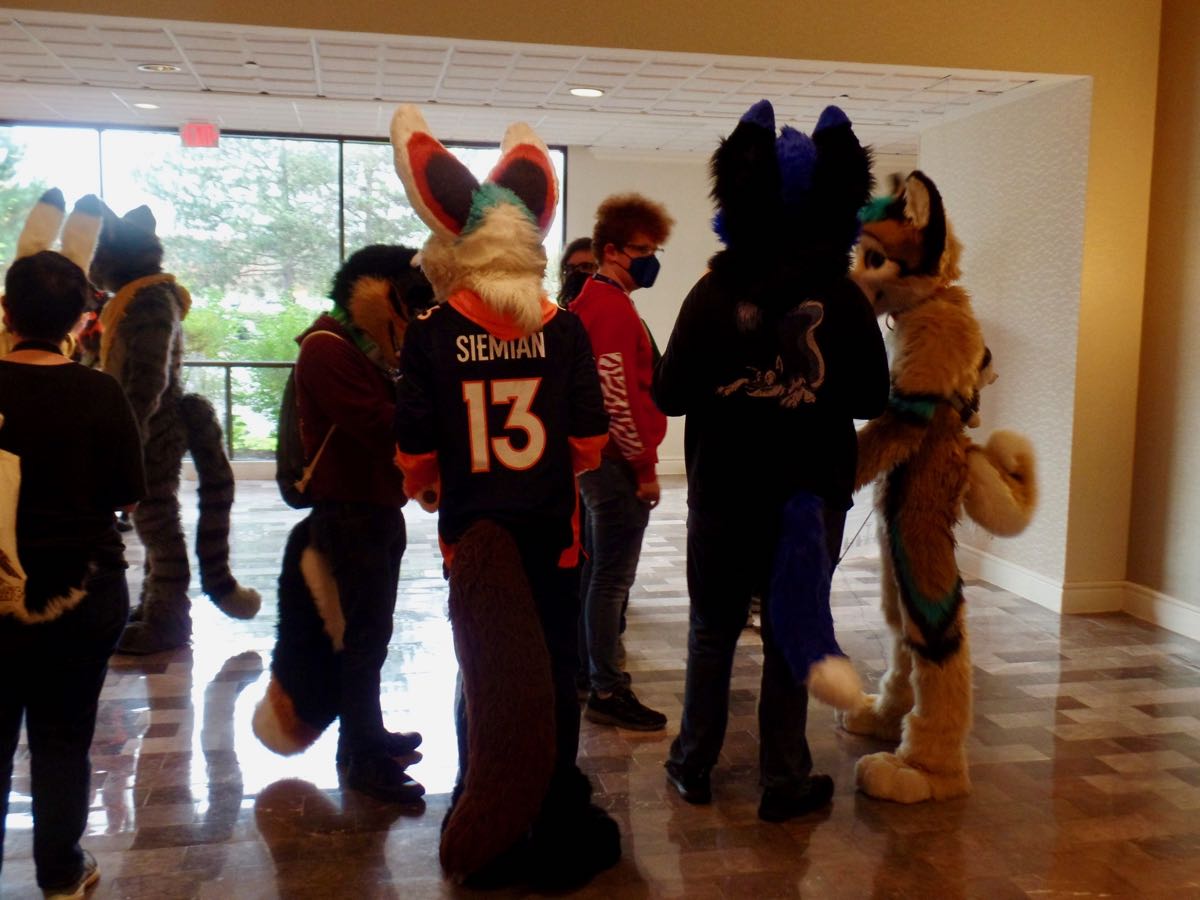 Fursuiters milling around after the convention's officially closed, mostly looking away from me, like I always photograph. I like the tails reflected in silhouette, though. 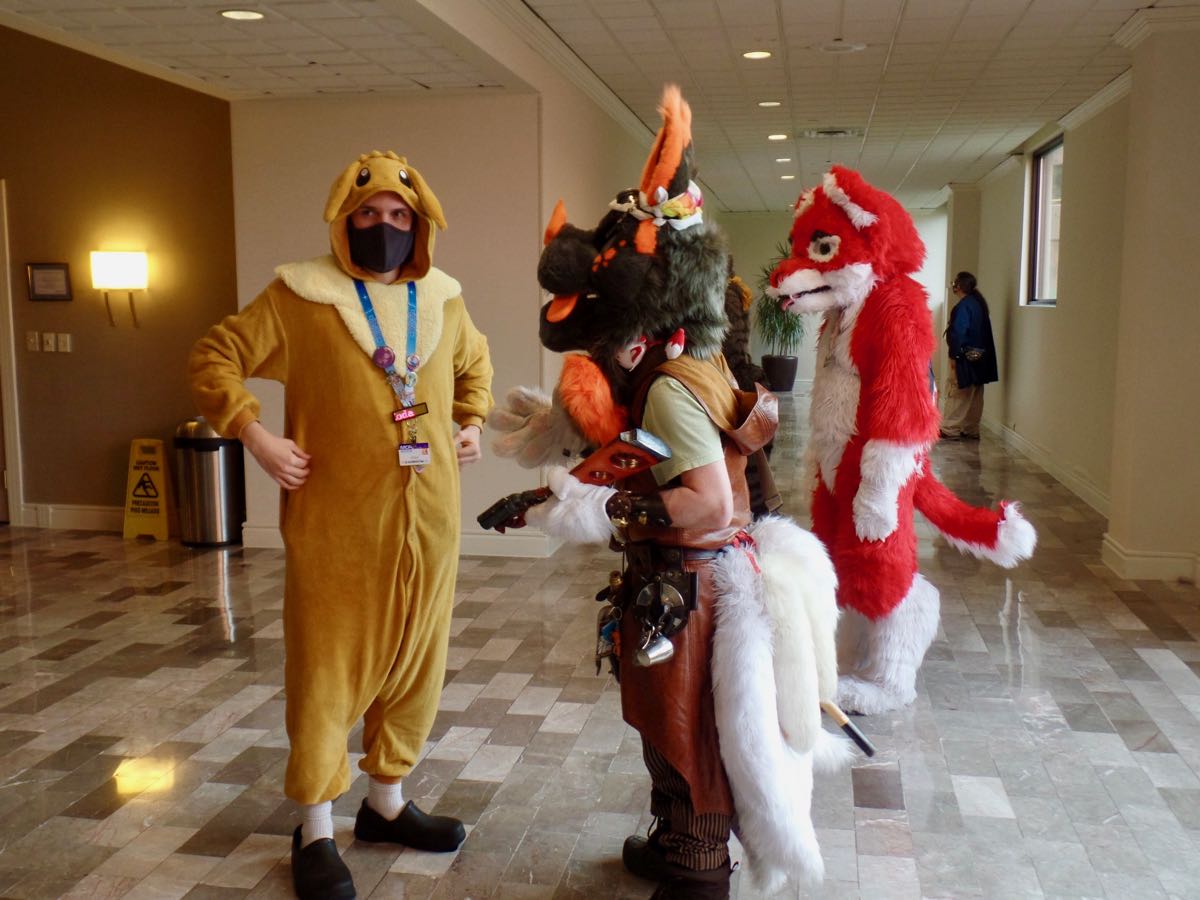 And here I caught someone in kigurumi looking at stuff that isn't me. 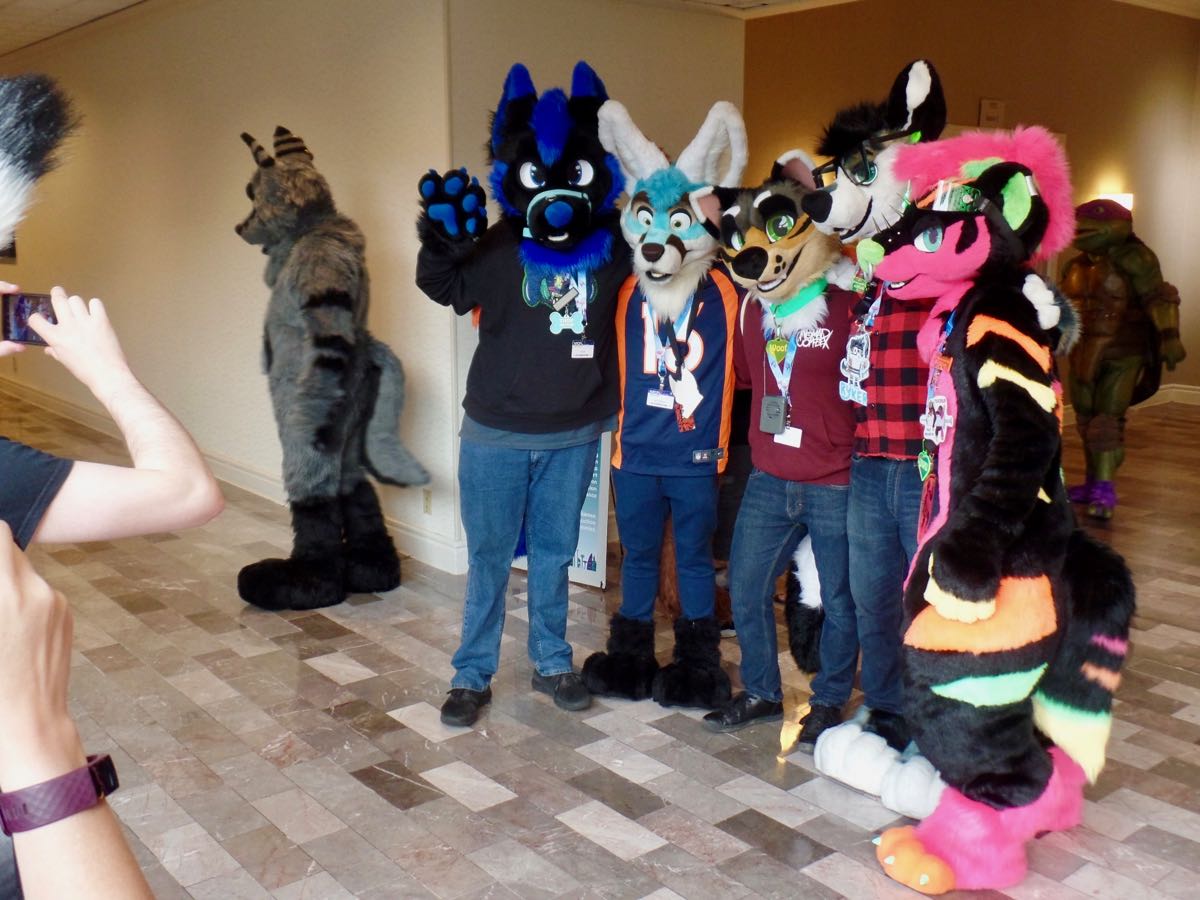 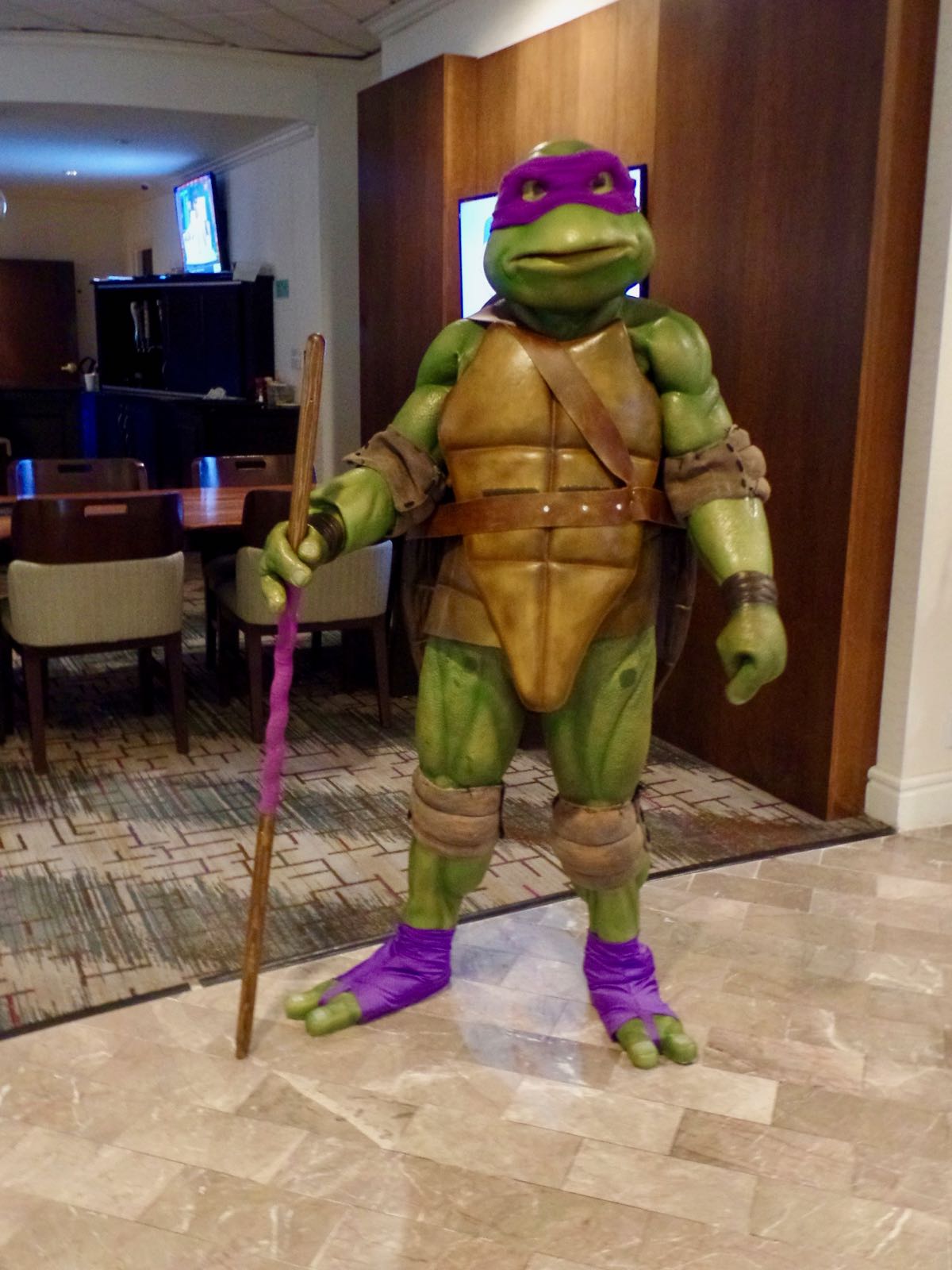 Hey, I know this guy from somewhere! 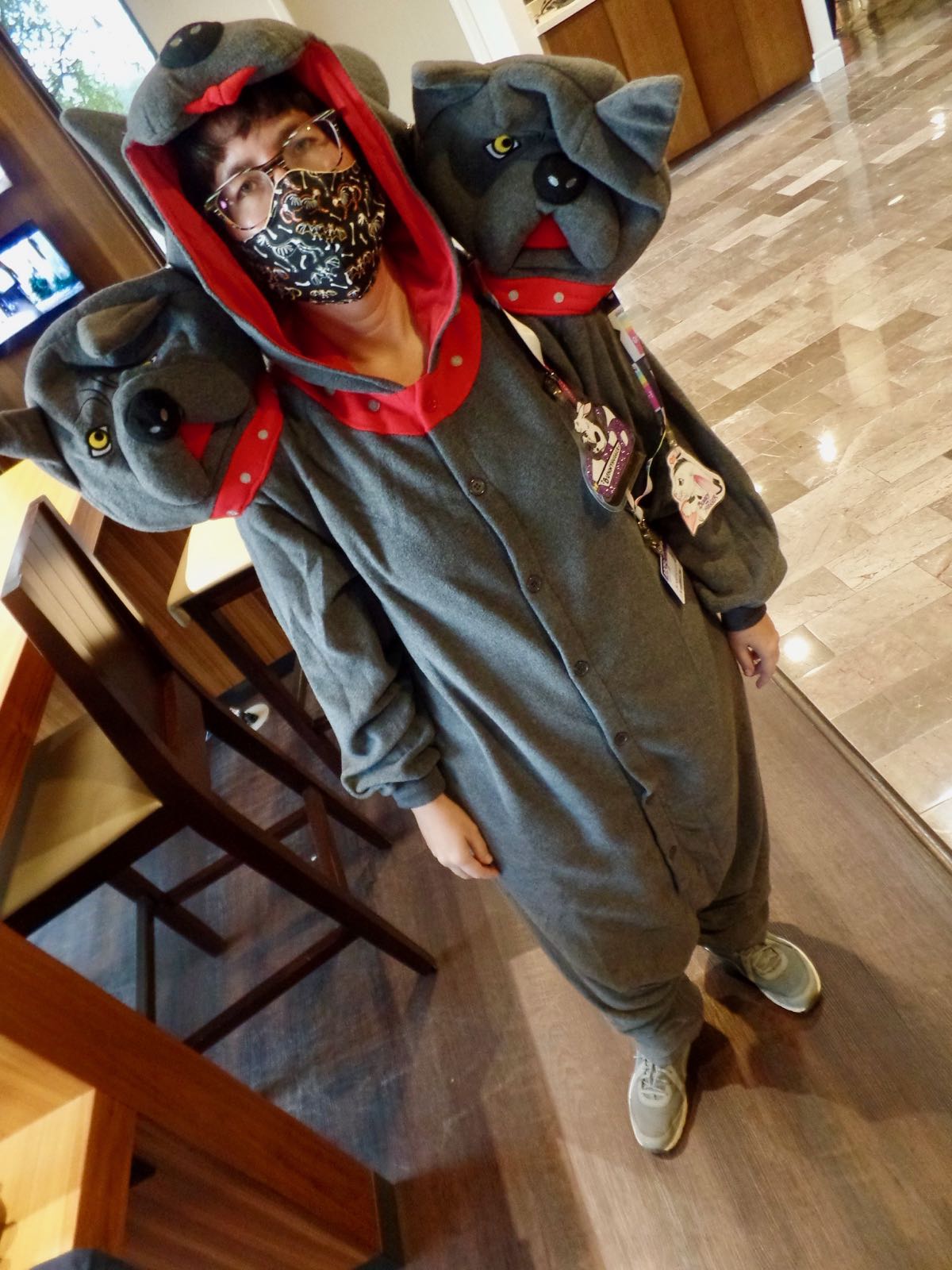 bunny_hugger puts on her new kigurumi for the first time.

Trivia: In the 1860s baseball clubs rarely had the team names printed on their uniforms. If they printed anything it would usually be only an initial letter. Clubs instead often wore monogrammed belts or armbands. Source: A Game of Inches: The Story Behind The Innovations That Shaped Baseball, Peter Morris.