This past Friday was Silver Bells in the City. It was back in person, live and restored to its pre-pandemic plans, more or less. This even though the pandemic, having no controls put on it, is again out of control. Well, but we would be outside, and would be able to keep our faces covered the whole while. And we're vaccinated. I haven't got my booster yet, unfortunately --- that's scheduled for Friday --- but it seemed at least fit to go.

We parked as ever at the Lansing Center's parking lot. The place is now in walking distance, by our standards, but we didn't know that we'd be up for the extra time it would take to walk there and back in the cold. As never happens, it was almost empty. We were a bit earlier than usual but not that much earlier, we thought. Also I had to get a parking ticket, which I paid on the way out, not knowing that the lot was free and they'd just left the gate open. Possibly I can get it refunded. The pay machine should have told us that wasn't necessary, though.

There were no vendors or hot chocolate or cookies at the City Market, of course. That building is still vacant, having somehow defied the mild gentrification of its area of downtown. There also wasn't anything in City Hall, the substitute they'd had in 2019. Possibly this was to keep crowds from lingering indoors. The sidewalk shopping center was set up in its usual place, but had only the one vendor selling hot chocolate, to a line intimidating in its length. We left without, so we could get back to the parade route, and a spot ... near our usual spot in front of the State Tree. Other people got to the front of the tape first. Spent too much time looking for hot chocolate, including poking into a Social Sloth Cafe and Bakery for the first time. The place you imagine from hearing the name ``Social Sloth Cafe and Bakery''? That's the Social Sloth Cafe and Bakery.

The parade started at 6:00, if the schedule's believed. The emcee started introducing things about fifteen minutes after that and then the Electric Lights Parade reached us. And this was ... very much what we remembered. Mostly vehicles, wrapped up in Christmas lights, proceeding slowly down Capitol Avenue. From most of the usual variety of businesses and organizations. And interrupted by about ten marching bands. We got through about five of the bands before anyone played ``Jingle Bell Rock'', and only two bands played it at all. (Plus the music speaker on one float.) The last band, the second to play ``Jingle Bell Rock'', did it as part of rickrolling the crowd. The joke's a good enough one although I didn't hear the laughing I expected from it.

And there were missing things too. Preuss didn't have their usual float. The Turner-Dodge House was missing too. The biggest, most shocking gap was the CATA-piller. The local transportation authority didn't have their bendy-bus decorated with antennas and eye signs winking at people. It's the most popular thing in the parade and I didn't hear anything of why it wasn't there.

After the lighting of the State Tree --- one from the western upper peninsula, almost as far as you can get from Lansing, after last year's tree almost taken from the capitol's backyard --- was a brief song. And then ... no fireworks. I forget the reason; construction, maybe? Their replacement for fireworks was a lighted drone show. And right after the song we all looked up to the sky and saw ... ... ...

And then some more nothing. And more nothing. Nothing in the sky and no announcements or anything about how long it might take. We couldn't say the show impressed us, considering.

I quipped that there was someone at the drone controls making an emergency phone call to the FCC about learning drones aren't allowed to fly over the capitol. And corrected that to the FAA. (Though I would not be surprised if the state grounds were restricted and a drone won't fly over it without special preparation.) We resolved to give it five more minutes, and four minutes in, saw a single drone flying out over City Hall. And then, back on the other side of things, the show finally started with a square grid of drones flying out and not quite being visible from where we were. As the crowd figured out where to view from it moved in this great wash over to the southern side of the state capitol. We stayed about where we were, accepting the obstructed view, and wondering what the expected sight lines were.

The drone show I'd say was more clever than impressive, really. There were some good bits, including one where they arranged into a sleigh and flew 'off' into the distance, vanishing by the lights dimming off. I hope the fireworks will be back, though I suspect they'll decide drones are cheaper.

Next on the photo roll? Not Silver Bells! They finally finished that bridge just south of us, the one whose demolition cut us off from the zoo and the River Trail and all. So I took a walk to enjoy the new access, on one of the many lovely days we had in early November. 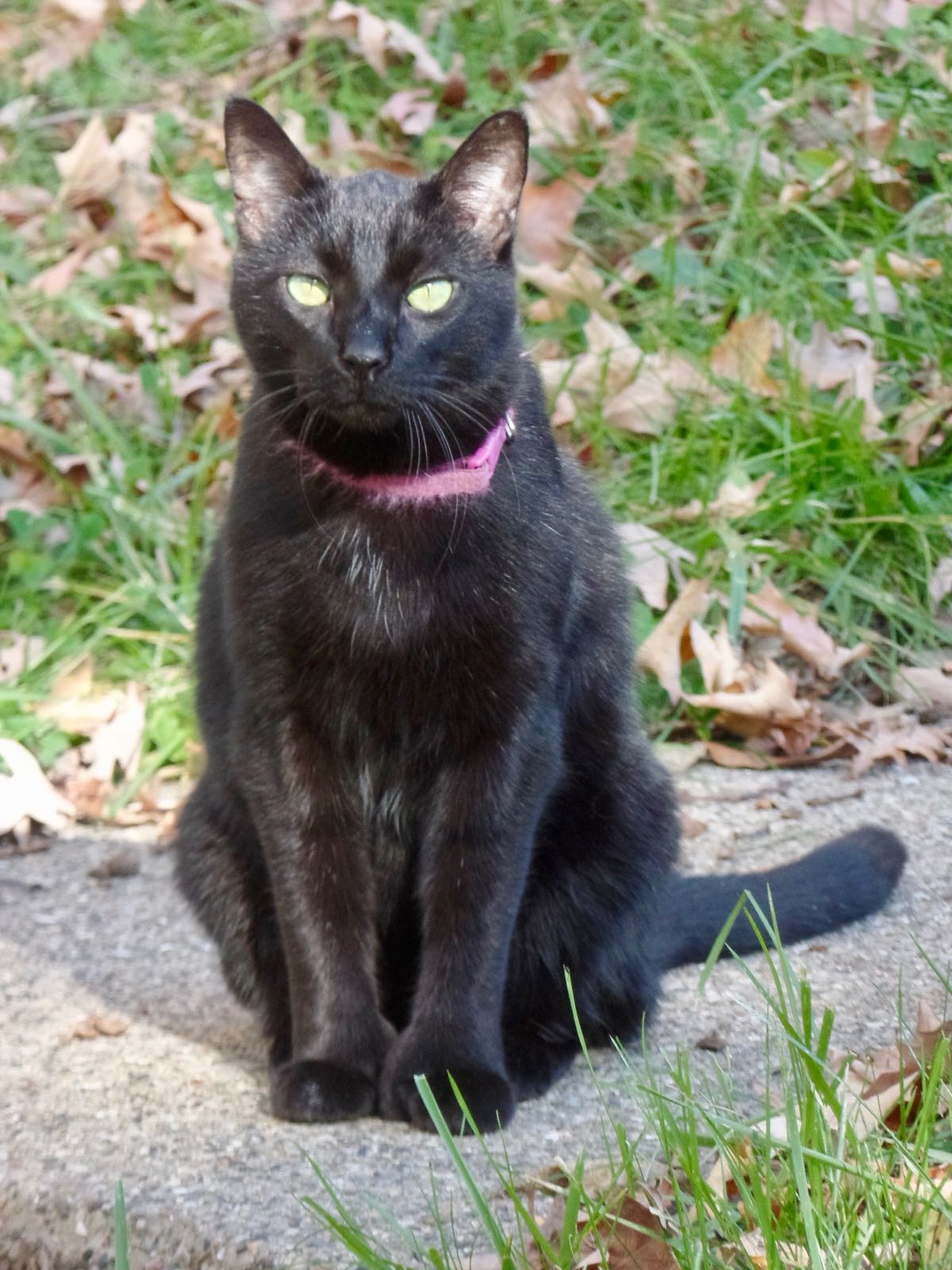 Neighborhood cat not impressed with me at all. 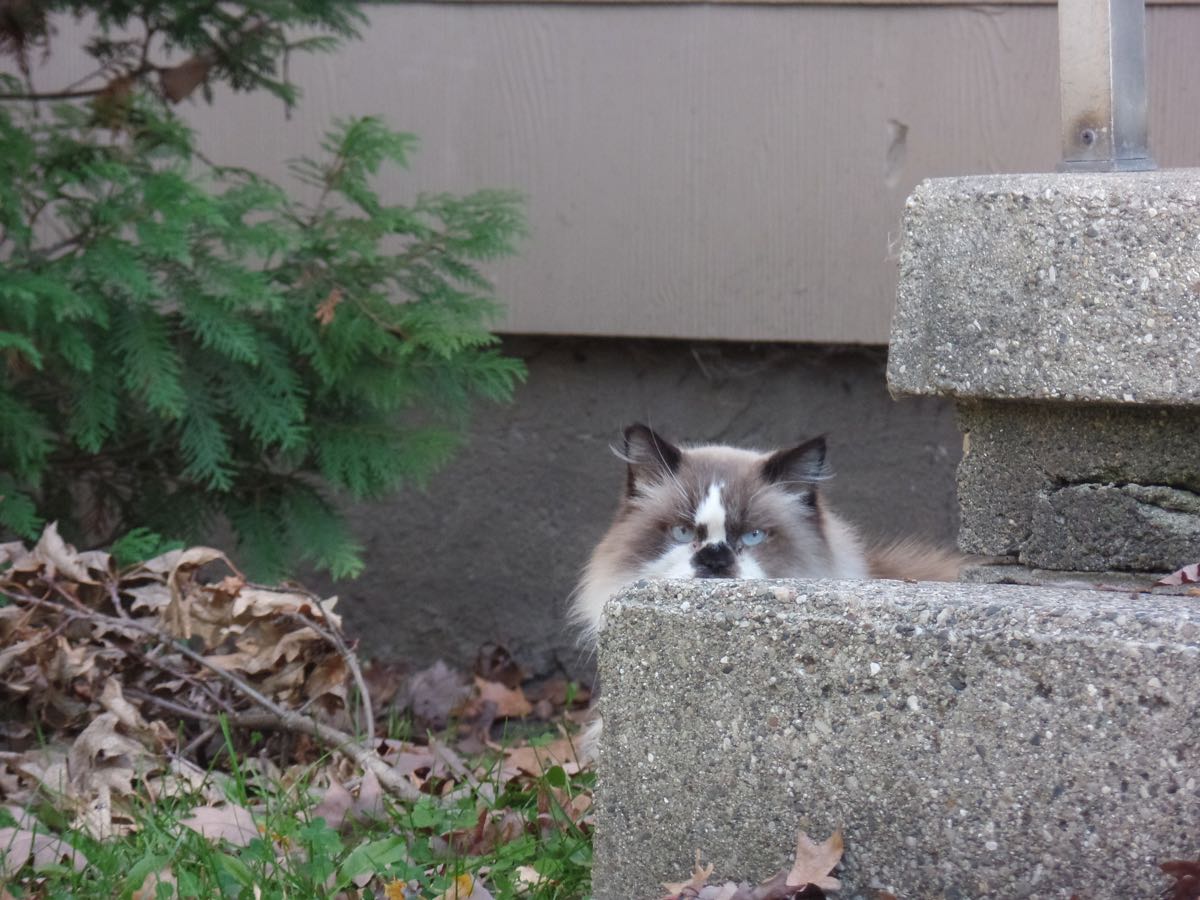 Housemate cat even less impressed with me. 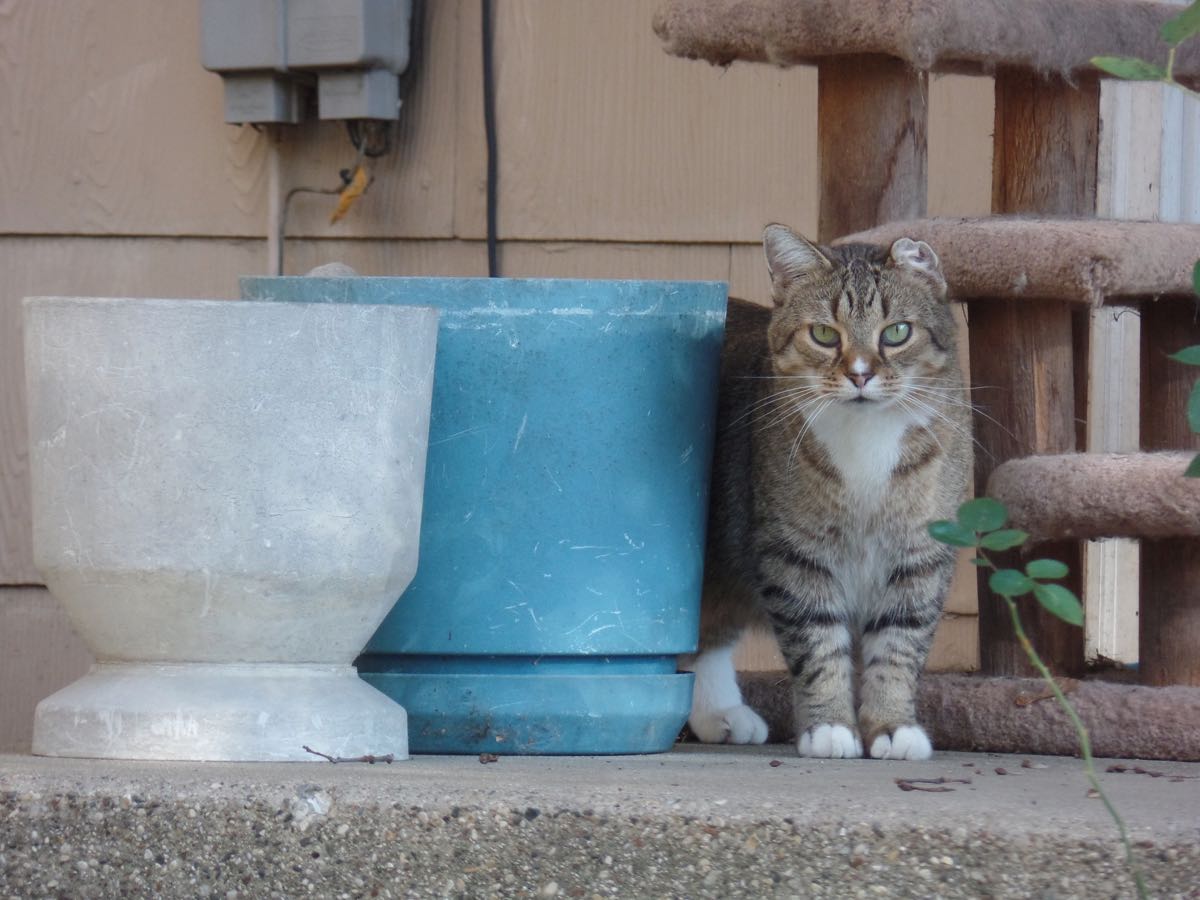 And another cat who wants me to come close enough to clobber me, except also doesn't want to touch me. 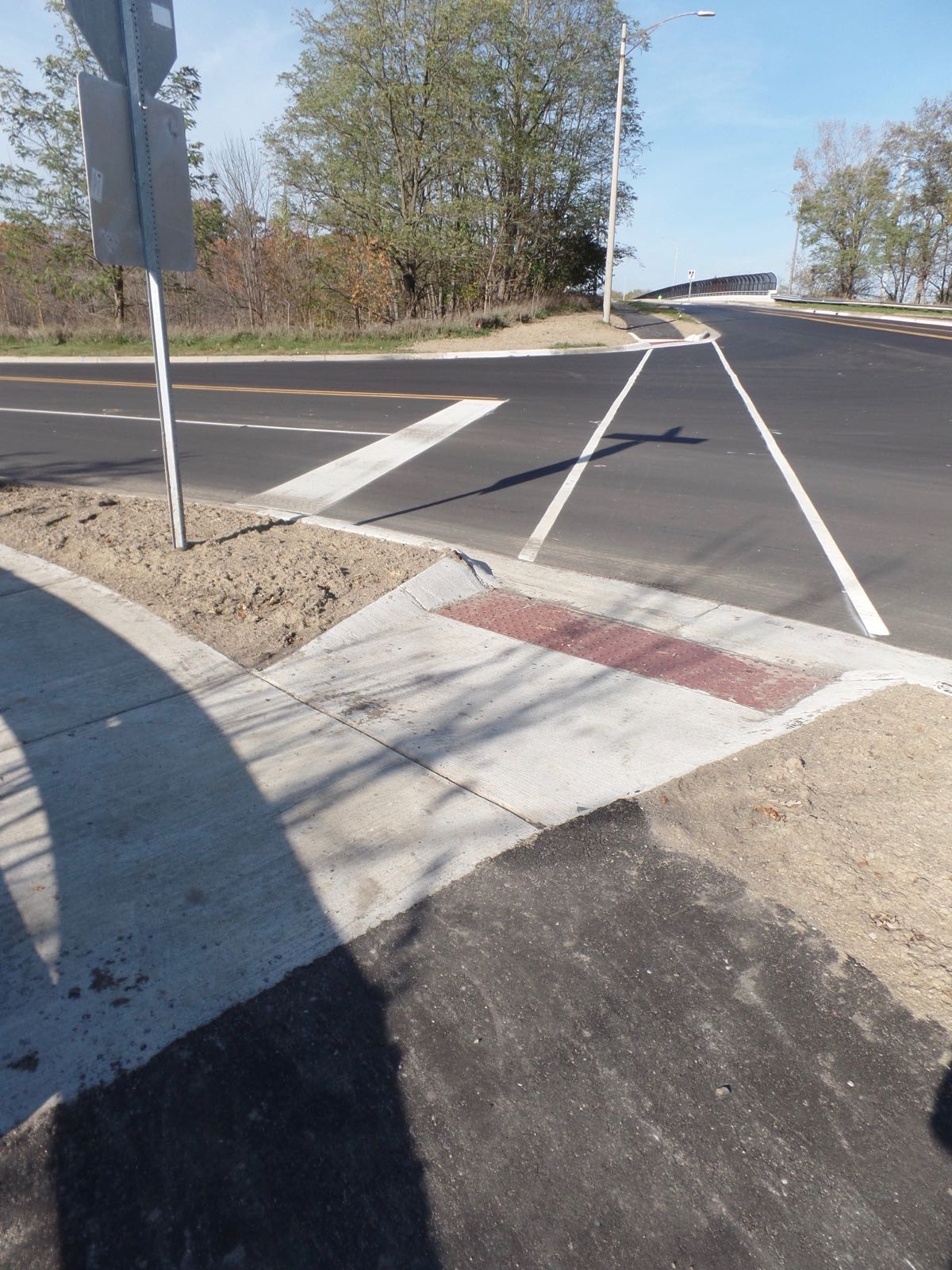 Well, here we are, the new intersection at the end of the construction zone, fresh-painted and with new sidewalk, unstamped, and a long strip of asphalt taking the place of sidewalk. 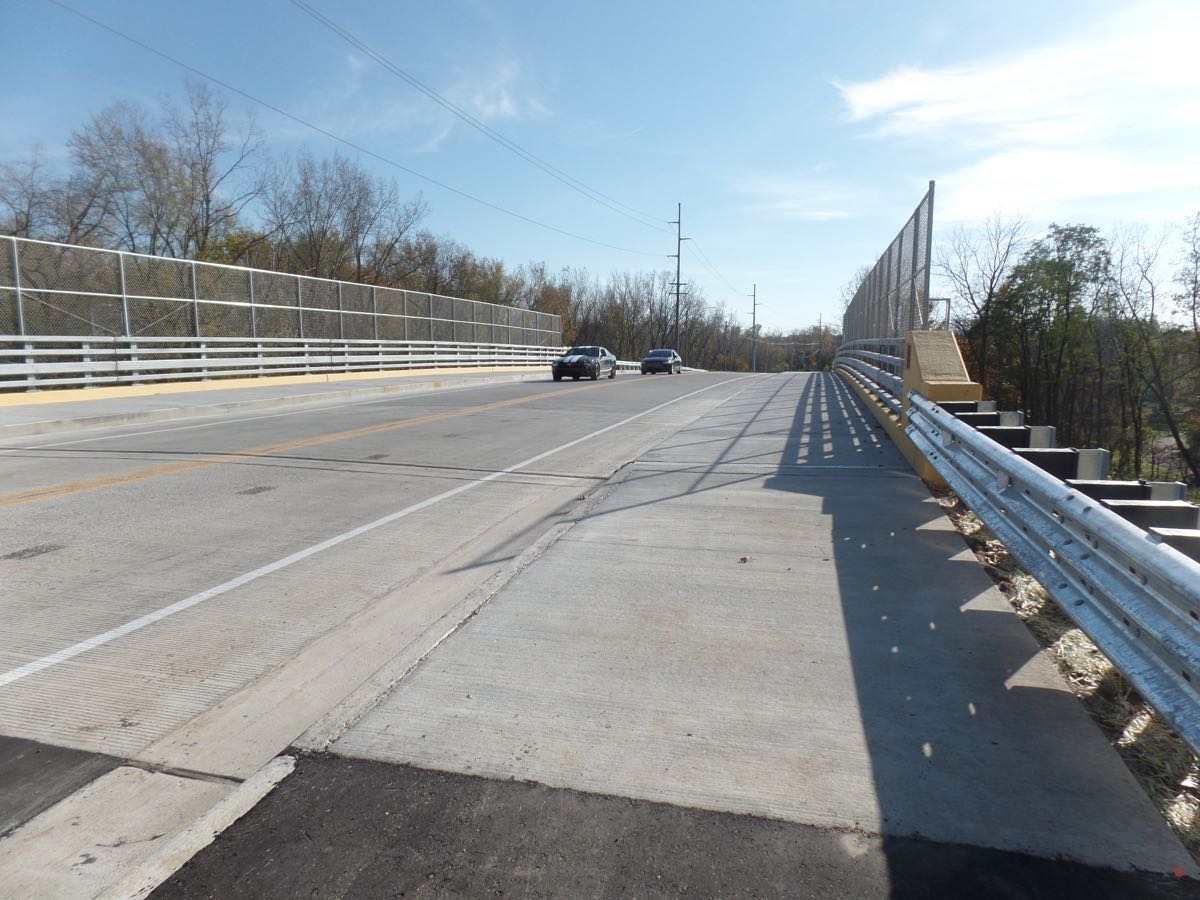 And here's the new bridge. No little divider median in the center, and proper wide sidewalks rather than bits of former roadbed cut off by tiny roads. 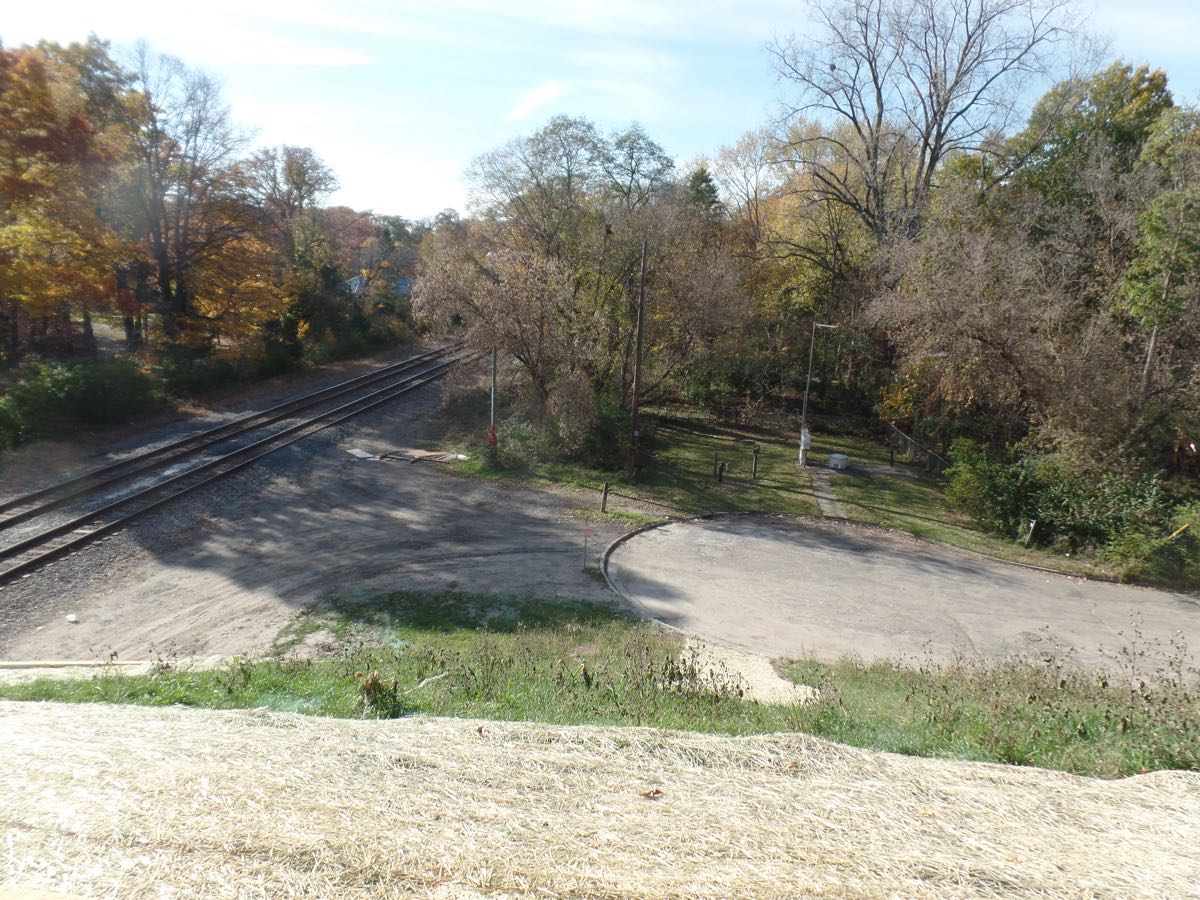 Looking out from the bridge, and the netting to protect the new grass, at the cul-de-sac where Clemens gets cut by the railroad tracks.

Trivia: In the days after his election as President, James Garfield wrote that he saw the position as a ``bleak mountain'' he was obliged to ascend, and that ``there is a tone of sadness running through this triumph which I can hardly explain''. Source: Destiny of the Republic: A Tale of Madness, Medicine, and the Murder of a President, Candice Millard.

Currently Reading: Lost Popeye Zine: King Swee'Pea, Elzie Segar, Tom Sims, Doc Wimmer. Editor Stephanie Noelle. Boy, the story's kind of a muddle. Swee'Pea's the new king of an island. OK. It's threatened by a neighboring island, the usual stuff. It's also threatened by the underground demons, who (it turns out) look like Eugene the Jeep But A Goon. This seems like too many antagonists, although after some clowning around Swee'Pea's island and the Demons come together to fight off the other island and that's a good twist.