You've brought me fame and fortune

Another interruption to the course of park-visiting: tonight the Lansing Pinball League had its second Super Ball playoffs. These don't really count in the standings --- we let the normal course of the season do that --- but it is a one-night, single-elimination playoff done as a ``Zen Tournament'', players paired up and each one playing one flipper. (Get the name?) And this year, based on which of the players showed up and where our rankings were,

bunny_hugger and I were teamed up. Yes, just like we'd practiced going into Zen Tournament night.

When we won our first game --- Medieval Madness --- I felt we'd satisfied honor and could be proud that we'd done respectably, not least since that gave us more wins than we had in the Brighton League playoffs. We were nearly eliminated in Getaway: High Speed II, but squeaked out a win on the last ball because I've got the hang of shooting the Turbocharger (which is, eventually, worth a lot of points) when the ball is rolled over from the left flipper. And then we played Lord of the Rings, and put up a respectable score. (We got to pick whether to play first or second, and I picked first, and felt guilty just after I did because our league's Lord of the Rings starts the first player in a multiplayer game in a mode, which is worth more points. But we won by well over the margin of what we scored in that initial mode.) And then came The Simpsons Pinball Party, which is a brutal game, unforgiving and prone to draining the ball on the skill shot. We put up a lousy game here, especially on the last ball, but by some wonder our opponents came in just barely under when they got a bad bounce after the skill shot.

I was getting ready for the next match when

bunny_hugger was looking at something the League President was showing and getting excited and hopping up and down and ...

Well, we won. We're the League's Zen Tournament Champions for the spring/summer 2014 season. 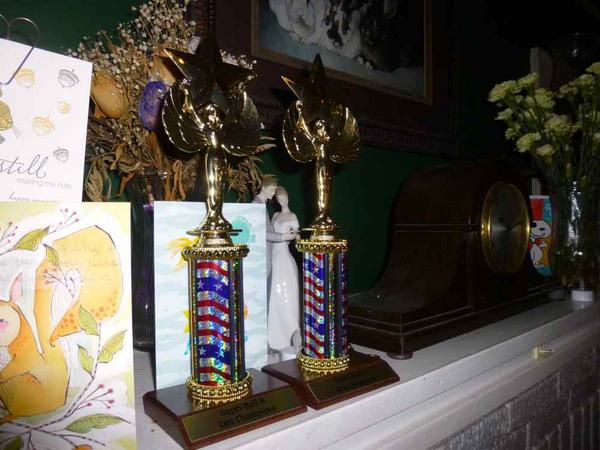 Now we have to work on next season.

Trivia: In 1977, the year before Ray Kassar became its head, Atari had sales of about $75 million. Within three years of Kassar's taking over the company had sales exceeding two billion dollars, making it the fastest-growing company in the history of the United States (to that time). Source: The Ultimate History of Video Games, Steven L Kent.

PS: Reading the Comics, July 28, 2014: Homework in an Amusement Park Edition, which lets me spin out again one of those stories from last year's Summer of Walk-Ons.